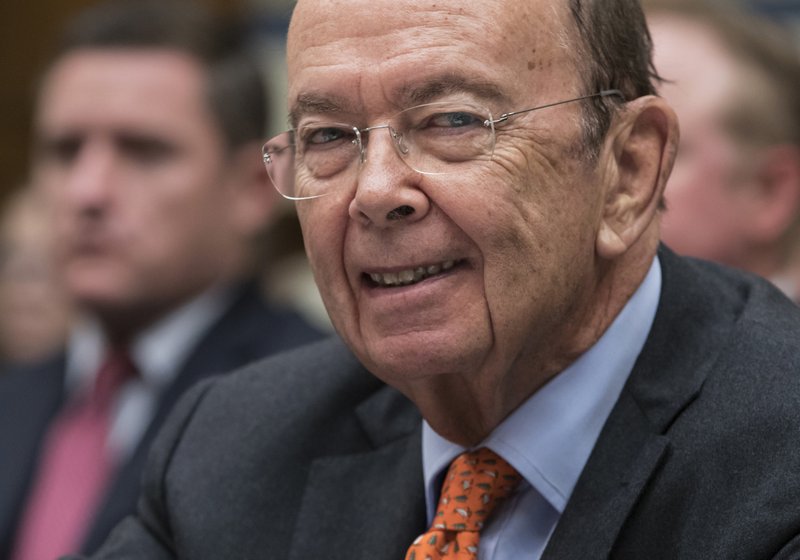 In this Thursday, Oct. 12, 2017, file photo, Commerce Secretary Wilbur Ross appears before the House Committee on Oversight and Government Reform to discuss preparing for the 2020 Census, on Capitol Hill in Washington.

NEW YORK -- A year after the Panama Papers, a new set of data taken from another offshore law firm shows that Commerce Secretary Wilbur Ross has a stake in a shipping company that does business with a gas producer partly owned by the son-in-law of Russian President Vladimir Putin.

According to records obtained by the International Consortium of Investigative Journalists, the shipper, Navigator Holdings, earns millions of dollars a year transporting gas for one of its top clients, a giant Russian energy company called Sibur, whose owners include the oligarch and Putin's family member.

Putin's son-in-law Kirill Shamalov once owned more than 20 percent of Navigator but now holds a much smaller stake.

Despite selling off numerous other holdings to join the Trump administration and spearhead its "America first" trade policy, Ross kept an investment in Navigator, which increased its business dealings with Sibur even as the West sought to punish Russia's energy sector over Putin's incursions into Ukraine.

Commerce Department spokesman James Rockas said Ross "never met" Shamalov and has generally supported the Trump administration's sanctions against Russia, according to the investigative report. Rockas added that Ross has withdrawn from matters related to transoceanic shipping vessels and has met the "highest ethical standards."

The details are likely to add to the questions about ties between Russia and the Trump administration, connections that for months have shadowed the White House and are a focus of an investigation by special counsel Robert Mueller. Yet it wasn't immediately clear how many partners Ross might have or what the profit-sharing agreement might be.

The International Consortium of Investigative Journalists disclosed the Ross holding as part of reporting on 13.4 million records of offshore entities in tax havens leaked to German newspaper Süddeutsche Zeitung. The newspaper then shared the records with investigative group and a network of more than 380 journalists in 67 countries. The New York Times is its U.S. partner in this inquiry.

The Times reported on the Ross holding on Sunday.

It wasn't immediately clear exactly how much of Navigator, which is publicly traded on the New York Stock Exchange, Ross personally owns. The International Consortium of Investigative Journalists reported that Ross and other investors own four Cayman Island entities that in turn own 31.5 percent of Navigator, a stake worth $176 million at Friday's closing stock price.

Ross' stake in Navigator is likely a small fraction of that. In financial disclosure forms he filed with the government this year, Ross valued his holdings in the Cayman Island entities, which include other companies besides Navigator, at no more than $10.1 million.

Sibur contributed 8 percent to Navigator's revenue last year, according to reports filed with securities regulators. Russia's energy sector is largely controlled by individuals with ties to state actors, including Putin.

Much of the new trove of files includes bank statements, emails and loan agreements from Appleby, a law firm that helps set up offshore dummy companies and trusts. Appleby told the investigative group that there is "no evidence" that it has done anything wrong.

The documents show how the Bermuda-based Appleby worked to help the wealthy elite, from Russian oligarchs to Middle Eastern princes, as well as multinational corporations like Apple and Nike, avoid billions of dollars in taxes.

Advocates for tax fairness said House Republicans should slow down their consideration of a tax-overhaul bill after the reports Sunday.

Initial reports about Apple, Nike, and Ross don't allege any behavior that would violate U.S. tax law. Based on the reporting that appeared Sunday, "nothing here is necessarily illegal," said H. David Rosenbloom, an international tax lawyer at Caplin & Drysdale and a former senior Treasury tax official from in the late 1970s. "There's nothing illegal about Americans having either an offshore account or an interest in an offshore company."

Nonetheless, the disclosures show the rapid schedule that House leaders plan to use to advance their tax bill is inadequate, said Clark Gascoigne, the deputy director of the Financial Accountability and Corporate Transparency Coalition. The non-partisan policy group focuses on combating offshore tax abuse.

"It doesn't make sense to move forward with marking up the tax bill before we can see all the documents," Gascoigne said in an interview Sunday.

"There are serious concerns about what this tax bill would do to address these offshore problems," he said.

"Congress must immediately halt action on the proposed tax bill and launch a comprehensive investigation into the activities revealed by these leaks," said Gawain Kripke, policy director for Oxfam America.

"The House Ways and Means Committee should postpone its planned mark-up of the bill," Kripke said.

Others disagreed. "It shows why the tax-reform elements within the tax-cut package are so important and why it is so vital to move quickly," said John Feehery, a Republican lobbyist and former House leadership aide.

With regard to Apple, the investigative report said documents show the company "shopped around Europe and the Caribbean for a new island tax shelter after a U.S. Senate inquiry found that the tech giant had avoided tens of billions of dollars in taxes by shifting profits into Irish subsidiaries."

Big investments in two other U.S. tech companies from a Russian government bank and Russian energy giant have also come to light.

The investigative journalist group reported that Silicon Valley investor and Russian citizen Yuri Milner got $191 million from VTB Bank, and invested that money in Twitter. The leaked records also show that a financial subsidiary of Russian energy company Gazprom funded a shell company that invested in a Milner-affiliated company that held roughly $1 billion in Facebook shares shortly before its 2012 initial public offering.

Milner told the International Consortium of Investigative Journalists that he was unaware of any involvement by the Gazprom subsidiary in any of his deals and that none of his investments has been related to politics.

Milner has also invested in a tech-savvy real estate fund that was co-founded by Trump adviser and son-in-law Jared Kushner called Cadre. Milner told the investigative group that he used his own money for the investment.

Sunday's revelations follow last year's release of records from a Panama-based firm involved in setting up offshore accounts. That disclosure triggered investigations in several countries, the resignation of the prime minister of Iceland and ouster of the leader of Pakistan. The Panama Papers also revealed that close associates of Russia's leader Putin had been using the dummy accounts abroad to store their wealth, including a close Putin friend who had $2 billion of offshore assets.

There are legitimate reasons for setting up offshore accounts, but lax regulation and anonymity in some jurisdictions make it easy to launder money, evade taxes and avoid regulatory scrutiny. Critics of the widening gap between the super-wealthy and the rest have seized upon the use of tax havens as revealed in the Panama Papers as evidence of a crisis, and governments have promised to crack down.

In the case of Ross, the investigative journalist group reported Navigator's Russian customer, Sibur, has ties to Putin in addition to his son-in-law.

A big shareholder is Gennady Timchenko, who was targeted by the U.S. and other Western nations for sanctions after Russia's invasion of the Ukrainian region of Crimea in 2014. A few months later, the U.S. barred banks from providing long-term financing to a gas company belonging to another large Sibur shareholder, Leonid Mikhelson. Mikhelson has also been sanctioned by the Treasury Department for propping up Putin's rule.

Sibur itself was not targeted by the U.S. sanctions, but the Bank of America and the Royal Bank of Scotland reportedly backed away from doing business with the company.

The Russian gas producer last year contributed $23 million to Navigator's revenue, an increase of more than 40 percent in two years.

Information for this article was contributed by Bernard Condon, Jake Pearson and Eric Tucker of The Associated Press; by Mike McIntire, Sasha Chavkin and Martha M. Hamilton of The New York Times; and by Lynnley Browning, Sahil Kapur, David Kocieniewski and Colleen Murphy of Bloomberg News.