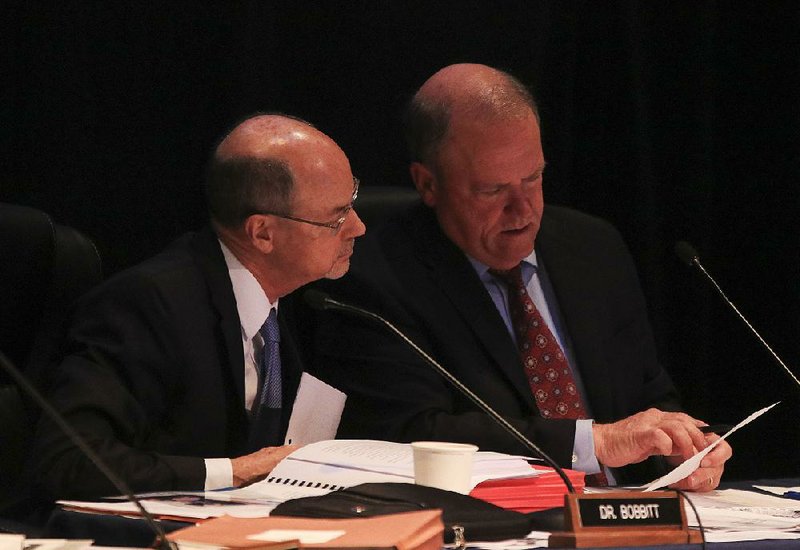 The University of Arkansas System has opened up a comment period for policy revisions regarding academic tenure.

System administrators announced Thursday a frequently-asked-questions page on its website, www.uasys.edu, along with the feedback@uasys.edu email address for which they will take public comments through Dec. 15 on the changes to the tenure policy.

Tenure, a status typically earned by professors after several years at one institution, gives faculty members more legal protections, safeguarding academic freedom, according to the American Association of University Professors.

The announcement came during a University of Arkansas board of trustees meeting Thursday, when administrators originally planned for the panel to vote on the matter. But after rising faculty concerns -- including job protection, reduced academic freedom and the process the system used to change the policy -- system administrators pulled the matter from consideration and listed it as only an information item.

A contingent of faculty members attended the board meeting Thursday, some prepared to offer comments. Instead, Vice Chairman Mark Waldrip directed them to the email address as the proper channel for those.

"I appreciate the feedback, and I want to make a strong statement of support for our faculty at all of our institutions," UA System President Donald Bobbitt said after the meeting. "We're attempting to make sure that the public, the Legislature and their peers all understand we have a very, very high-quality standard for procedures and practices.

"We also have very, very high-quality faculty, and these changes that we are proposing are just simply a way to ensure that that high quality continues and were necessary and that the external world has as much faith in what we do as I do."

The UA System told trustees in March 2016 that administrators were starting an overhaul of system-wide "administrative memoranda" -- historically issued by the system president to the campuses and units -- to align them with current law and practice, officials have said. The tenure policy was initially adopted in 1963, and it was last revised in 2001, according to the system's general counsel's office.

Since then, the UA System has added more colleges and universities to its family, some of which do not offer tenure. With that, the office said, came varying practices and policies on tenure, along with legal developments that have affected them.

On Sept. 15, the administration sent a letter to chancellors asking for feedback, which was set to close Oct. 20, Bobbitt said.

According to the system, the major concerns are: "concerns with the more detailed definition for 'cause,' which comes into play when disciplining or terminating faculty; a suggestion that certain changes would weaken academic freedom and impact faculty due process rights; a concern that the amendments allow faculty to be terminated in one year for receiving an unsatisfactory performance evaluation; a concern that the amendments preclude tenure track faculty from seeking more than one suspension of the tenure probationary period; and a suggestion that faculty were not involved in the revision process, which they believe could impact accreditation."

Joshua Silverstein, a University of Arkansas at Little Rock law professor, has written a detailed critique of the proposal, and an op-ed column with another law professor, Robert Steinbuch, appeared in Thursday's Arkansas Democrat-Gazette. Silverstein, who also attended the meeting, said in a later interview that his concerns centered on the system using "unsatisfactory performance" -- instead of incompetence -- and what he called "collegiality" as grounds for termination for a tenured professor.

"A good professor, who is not by any standard incompetent, can be found unsatisfactory," he said, adding that faculty have been found performing their teaching duties unsatisfactorily because they offered too many multiple-choice questions than the dean thought appropriate.

And, on its surface, Silverstein said, it's easy to understand why people want everyone to be nice to one another. But, he said, one person's strenuous argument is rude to another person.

"Human beings get their feathers ruffled quite easily," he said. "Faculty are often analyzing and addressing. Things get heated both in writing and orally."

The measure, he said, would stifle intellectual debates.

In its current form, Silverstein said the policy changes would damage teacher recruitment and retention, and faculty members would be "far less able" to teach, research and speak publicly for fear of termination. Minority viewpoints -- especially in religion, race and politics -- would be most affected, he said.

Add it all together, he cautioned, and the education of Arkansas' students will be diminished, and the research that faculty members produce will be far less helpful to society.

The Arkansas Conference of the American Association of University Professors sent a letter to board chairman Ben Hyneman, detailing many of the same concerns.

"We understand the need for policies and procedures to be revised in order to be clear to all involved in upholding them," the letter states. "But such revisions must not come at the expense of academic freedom or shared governance."

The system's administration said in its frequently-asked-question section that "unsatisfactory performance" and "disruptive conduct" are not new reasons for which faculty members can be dismissed. UALR and the University of Arkansas, Fayetteville, both have policies now that allow for termination under "unsatisfactory performance," which includes peer review within departments and colleges, it said.

UALR's policy allows for a minimum of four such performances in full -- teaching, research and service -- before cause for termination, Silverstein said, adding that the system's proposed policy does not include that. Even before then, two unsatisfactory performances in full will land a professor with a remediation plan, he said.

The system also said in the frequently-asked-questions section that "a pattern of disruptive conduct or unwillingness to work productively with colleagues" must be shown before dismissal.

On Thursday, the board did not make any comments related to the proposal. 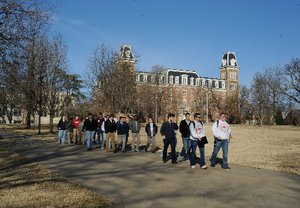 Photo by Andy Shupe
A crowd walks Saturday, Feb. 13, 2016, past Old Main and the University of Arkansas campus in Fayetteville.
RELATED ARTICLE

UA board meets as AD Long sits out