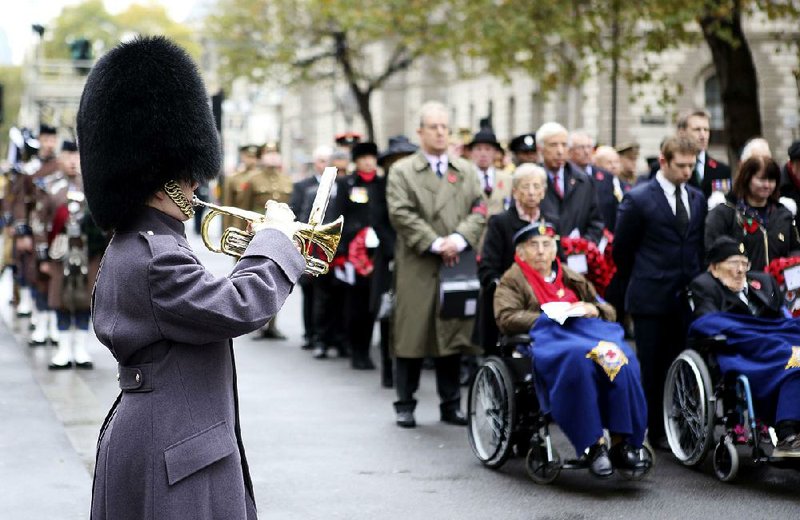 People at the Cenotaph war memorial in London take part in the Western Front Association’s annual service of remembrance Saturday, one of numerous events across Europe marking the anniversary of the end of World War I.

LONDON -- Millions of people in Britain and France paused to remember the victims of war Saturday on Armistice Day, which marks the anniversary of the end of World War I.

Across Britain, people stopped in streets, squares and railway stations for two minutes of silence starting at 11 a.m. The moment -- the 11th hour of the 11th day of the 11th month -- marked 99 years since the guns fell silent at the end of the Great War on Nov. 11, 1918.

In London, the bell of Parliament's Big Ben clock tower sounded the hour for the first time since it was halted for repairs in August.

Many Britons wore red paper poppies, symbolizing the flowers that bloomed amid the carnage of WWI's Western Front. Armistice Day originally commemorated the millions who died in the Great War, but it now also remembers those killed in World War II and subsequent conflicts.

Across the Channel, French President Emmanuel Macron led a solemn ceremony on Paris' Champs-Elysees, laying a wreath at the statue of wartime French Prime Minister Georges Clemenceau, a key architect of peace between the great powers. Macron then inspected French troops and laid a wreath at the Tomb of the Unknown Soldier at the Arc de Triomphe.

Next year, France will host a grand Armistice centenary, marking 100 years since the war's end in 1918 with envoys from 80 nations.

Poland also held events Saturday to celebrate the nation's Independence Day, when it regained its sovereignty at the end of World War I after being wiped off the map for more than a century.

Flags fluttered across the country and television news presenters wore pins in the colors of the national flag.

In Warsaw, Polish President Andrzej Duda oversaw ceremonies at the Tomb of the Unknown Soldier, walking past a military guard before flags were raised and cannons rang out in a salute. After delivering a speech, he took part in a wreath-laying ceremony at the monument.