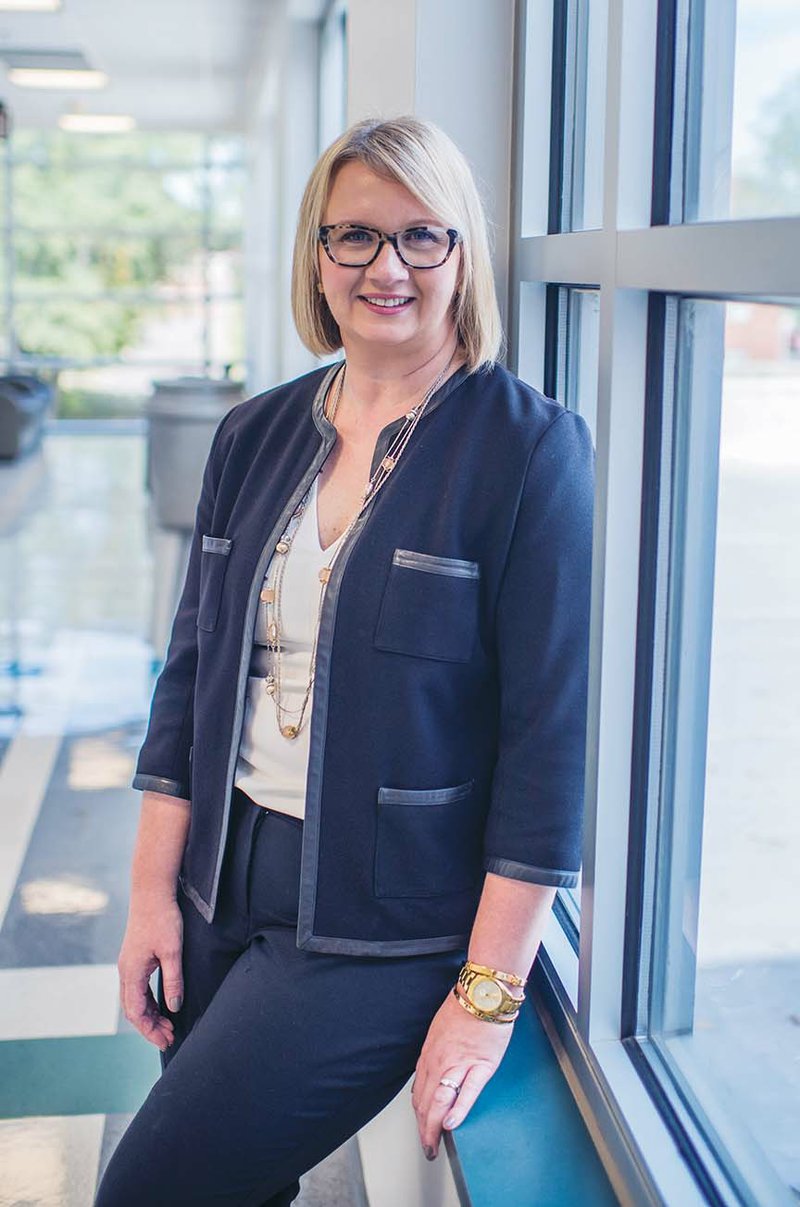 Keegan Nichols, the new vice president for student services at Arkansas Tech University in Russellville, is responsible for a staff of more than 100. Nichols, who started in the position in June, said her biggest accomplishment to date has been a 90-day listening tour to determine the needs on campus and help develop a strategic plan for the Division of Student Affairs.

Keegan Nichols of Russellville often uses the phrase “wearing a lot of different hats” because it fits every job she’s had.

The 38-year-old new vice president for student services at Arkansas Tech University in Russellville is responsible for a staff of about 100, and five deans and associate deans report to her.

“I have an amazing job,” she said.

She is responsible for a variety of programs, including campus life, diversity and inclusion, public safety, residence life, student conduct, student wellness and veteran services.

Nichols started in the position June 26, coming to Arkansas Tech from Fort Hays State University in Kansas, where she was associate vice president for student affairs.

Working in higher education was not the path she originally started down, she said.

Nichols’ family moved from Harrison to Vilonia when she was in the first grade, and after she graduated from high school, she went to the University of Central Arkansas in Conway.

She said she had no idea what she wanted to do with her life, but she loved being involved with her sorority, Alpha Sigma Alpha, which she served as president.

“I loved being involved and the investment people put into me,” she said.

Her sorority’s philanthropy was Special Olympics, and that led her to major in special education. She realized that might not be the right fit, and she switched gears and earned a master’s degree in college student-personnel administration from the University of Central Missouri in Warrensburg.

“I thought I would do orientation, Greek life, student activities — help people like I was helped in college and help build leadership skills,” she said.

She was hired as coordinator for student activities at Rockford College, now Rockford University, in Illinois, and she was in her element, planning activities and running student orientation. And in what has become a pattern in her career, she was quickly promoted. She became associate dean of student success.

“It was a really cool experience,” she said. “As a first job, you got to wear a lot of different hats, and I got to see a lot.”

She earned a doctorate in adult and higher education from Northern Illinois University while serving as the assistant to the assistant vice president for student affairs for four years.

After earning her doctorate, she was vice president of student affairs at a community college in Colby, Kansas.

“It was amazing; it was a small campus, and I was able to wear lots of different hats,” she said. There, she was responsible for a long list of areas, including international-student services and residential life.

“She is just an incredible, brilliant female leader,” Nichols said of Mason. “She takes people under her wing and mentors them, and they don’t even know it.”

She and Mason have a mutual admiration.

Mason, now president at Valley City State University in North Dakota, was named Nov. 3 as president of Fort Hays, where she and Nichols got to know each other.

“She just exudes high energy, and she’s positive, so she elevates everyone around her,” Mason said of Nichols. “She’s always looking for the best in people — it didn’t matter if it was a member of her team, a student, or me on a daily basis coming in and saying, ‘Hey, how you doing? What can I do to help you?’”

Mason said Nichols is “a caring individual to the max, more than any person I’ve ever known.”

Mason also called Nichols fun: “You can’t help but smile when you’re around her.”

In addition, Mason said one of Nichols’ more outstanding qualities is that she’s intelligent and can master any subject or job with precision, from both an experiential and a knowledge base.

“She’s smart, and she gets her work done,” Mason said.

Nichols likes to walk the walk, not just talk the talk.

When she was in charge of overseeing Starbucks employees at a former institution, she trained and became a certified Starbucks barista.

“They talked about being overworked. I learned to advocate for them,” Nichols said.

“It was intense,” she said. “The regional director flew out … and he started laughing. He said, ‘You waste a lot of milk.’ I was terrible at it.”

Nichols said she and her husband, James, whom she married while working on her doctorate in Chicago, had faith that they’d land where they were supposed to be.

“This opened up at the perfect time,” she said of the Arkansas Tech position.

The position was held by Susie Nicholson, who was hired for a new position as the institution’s NCAA compliance officer and an assistant affirmative-action officer. Amy Pennington, dean of students, served as interim vice president of student services for almost a year.

Nichols said she was impressed, first of all, with Robin Bowen, the university’s president and the first female president of a four-year public university in Arkansas.

“I liked her vision. I liked how she talked about the students being the focus of the university, because that’s my focus as well,” Nichols said.

She was impressed with the campus, too.

“The students are engaged. They’re friendly; they’re thirsty for knowledge,” Nichols said. “My team was amazing, and they had already established programs.”

Nichols said she enjoys all her areas of responsibility, even student conduct.

“People come to school with all sorts of challenges, and we get to help sort that out and give them tools to make better choices,” she said.

“I meet with students twice a week. They are a group trying to make a difference on campus. I sit through their meetings and give a little bit of advice or direction,” she said.

“I think the biggest thing I have really done is I did a listening tour for 90 days,” Nichols said. “I learned that the [student-services] team is incredible and that they really wanted an advocate — just somebody to help celebrate the great things they are already doing.”

She used the listening tour to help create the strategic plan for the Division of Student Services, which will support the university’s plan. She said a draft is done and will go through the proper channels.

In addition to creating a clear direction for the office, “I want to be the most student-centered division [on campus],” she said.

Nichols said her long-term goal is to be a college president, but her job now is all-consuming.

“It’s one of those things that works out just amazing for me. I have a career where I get to encourage people every day,” she said.

And that’s the hat she wants to keep wearing.