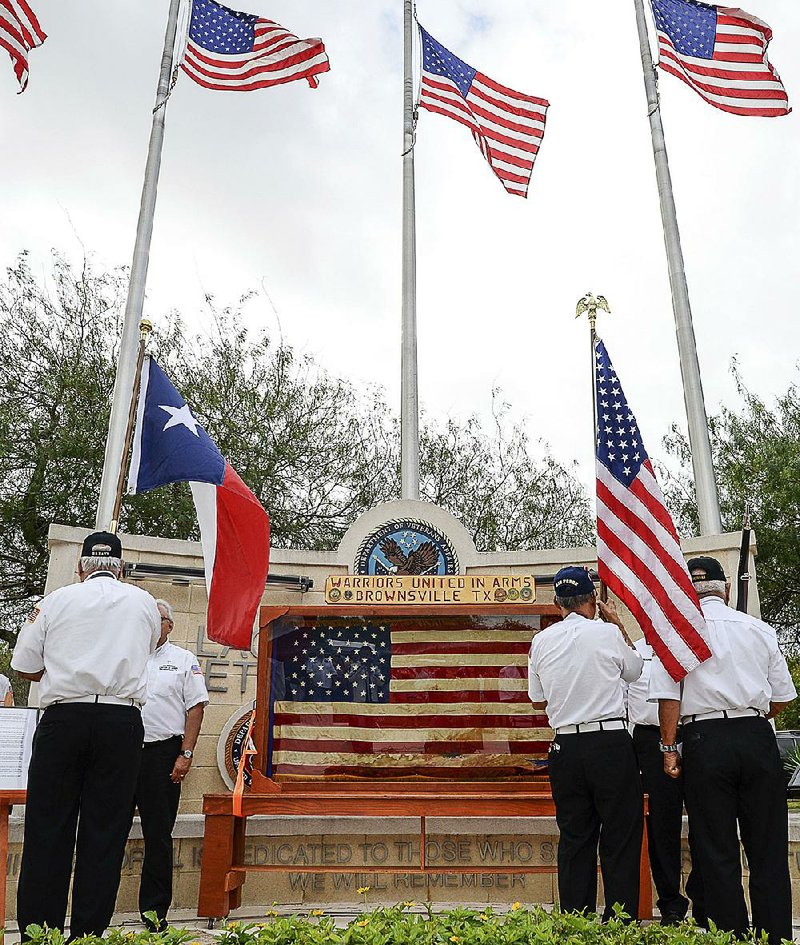 An honor guard presents the colors during a Veterans Day ceremony Saturday in Laguna Vista, Texas.

Americans honored their military veterans Saturday with a parade in the wintry cold of New York City, where one World War II vet thanked onlookers for remembering, and in a somber ceremony in a Texas community bloodied by a church massacre where almost half of those killed had ties to the U.S. Air Force.

In parks, war memorials, football fields and on streets across the United States, politicians and citizens gathered to thank those who have served in the nation's armed forces.

In Sutherland Springs, Texas, a Veterans Day ceremony outside a community center was grim as about 100 people gathered under cloudy skies, honoring the more than two dozen people killed a block away at a church last Sunday.

An Air Force official has said 12 of the massacre victims had direct connections to the Air Force, "either members or with family ties." Sutherland Springs is near Lackland Air Force Base.

Wilson County Judge Richard Jackson's voice broke as he thanked the first responders and others who rushed to the First Baptist Church, saying the scene will affect them the rest of their lives.

"Maybe this will start the healing process that will get Sutherland Springs and Wilson County to put this horrific tragedy behind us and look to the future," Jackson told the gathering.

After the ceremony, members of a fire and rescue squad stood in a circle, put their arms over one another's shoulders, and prayed. A wreath was placed near flags to remember those killed.

"It's beautiful, so many people," said Aldrin, who rode in a convertible and waved to the crowds gathered on Manhattan's Fifth Avenue. Aldrin, 87, served in the Air Force and was the second man on the moon, piloting the Apollo 11 and following Neil Armstrong onto the lunar surface in 1969.

Air Force Gen. Ellen Pawlikowski also attended, along with hundreds of other veterans who marched in the cold. One of the World War II veterans who rode in a float held a sign that read "Thank you for remembering." Others held U.S. flags or black-and-white photos of their loved ones, and dressed in historic uniforms. A man dressed as a sailor and a woman in a nurse's uniform re-enacted the famous World War II Victory over Japan Day kiss photo.

"We are so proud to be a city where over 200,000 veterans live, veterans who have answered the call of duty and have traveled to the ends of the globe to protect liberty at home and abroad," de Blasio said. "For the sacred sacrifice of all veterans across this country, the 8.5 million Americans who call New York home will forever remain in the debt of their service."

Also in New York, state and local officials said a new monument will honor black military veterans, and will be built in Buffalo's waterfront, alongside other memorials. Planners hope to dedicate it on Veterans Day 2018.

In Washington, Vice President Mike Pence and his wife, Karen, carried orange buckets with the message "Let's Do This" to the Vietnam Veterans Memorial, joining several dozen volunteers to give it a cleaning.

The Pences spent about 40 minutes just after dawn Saturday wiping down the memorial wall engraved with the names of fallen soldiers.

"This is a great way to start Veterans Day," Pence declared. He shook hands and posed for photos with the volunteers.

The group was joined by James Pierce, a National Park Service ranger who lost a leg while serving with the North Carolina Army National Guard in Afghanistan.

Rhode Island used the occasion to officially open a new home for veterans.

The state is one of the first to use a community living concept for veterans' long-term care, said Kasim Yarn, Rhode Island's first director of veterans affairs.

Gov. Gina Raimondo hosted a ribbon-cutting ceremony at the home.

The new 208-bed complex provides nursing and residential care for veterans. They began moving in last week into cottages, where each resident has a private bedroom and bathroom.

Information for this article was contributed by Claudia Lauer, Emily Schmall and other staff members of The Associated Press.