Arkansas originals: Exhibit showcases items made in each of the state’s 75 counties over the years 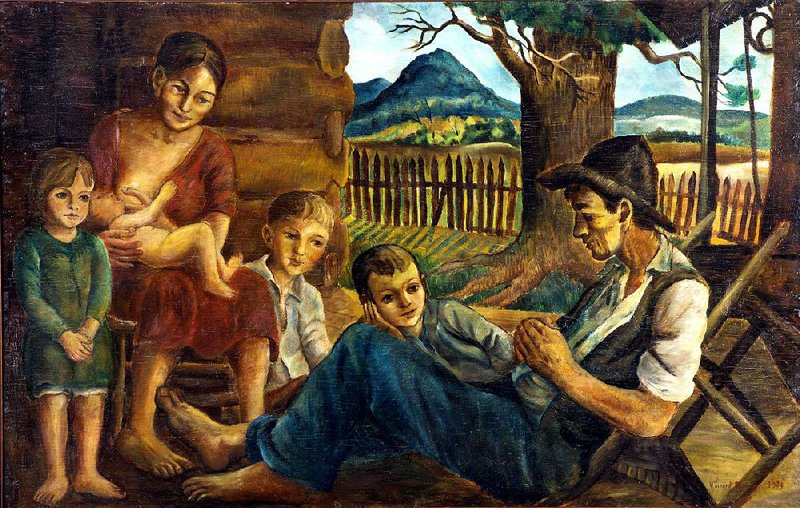 They hide in attics, stuffed into boxes, wrapped in paper or even out in plain sight. And, often, the owners don't even realize they have a treasure in their house.

Since the 1980s, the Historic Arkansas Museum's Arkansas Made Project Research Team has traveled all over, armed with tape measures and flashlights, to examine old tables, paintings, photographs and other objects artistic or utilitarian for the name of an Arkansan or an Arkansas place.

Over those years, they've culled a large collection of pieces, some of which rotate through the Arkansas Made Gallery. But now, the gallery has a special theme as it hosts "All of Arkansas: Arkansas Made, County by County" through May 14.

"We were struck by just the journey that this museum has been on, coming out of our (75th) anniversary last year," explains Arkansas Made Project research curator Caroline Millar. "Going county by county seemed like a natural theme of the work of this museum. ... No place is too small."

To create the exhibit, they spent weeks searching their database for representatives of each county, pieces that had historical relevance, high quality standards and visual impact. That could mean a tulip poplar cabinet from Lawrence County or a fiddle made by Arkansas Living Treasure Violet Hensley of Yellville.

The exhibit also features a wide range of photographs, paintings and even letters, such as one written by Arkansas Gov. Thomas Drew to jurist Jesse Turner on April 7, 1861. In it, he outlines the case against Arkansas seceding from the Union.

One of the most historically important items in the exhibit is a needlepoint sampler made by Nancy Graves, an 11-year-old Cherokee girl in 1828. She was living in Russellville at a mission school founded to teach American Indian girls domestic skills and to speak, read and write English. The sampler, which bears Bible verses and a message to "western girls," with careful stitching on a piece of fabric browned by age, is the earliest documented American Indian-made sampler in the United States.

"We've relied on the kindness of so many strangers all over the state," Millar says.

The work has helped them amass a collection rich in variety, personality and historical value that speaks to the diversity of Arkansas.

A case of pottery holds not only a 6-gallon churn for lard and butter but representatives from Arkansas' art pottery scene, boosted by Arkansas clay.

Three small end tables at the front of the exhibit highlight the variety of Arkansas craftsmanship, styles and tastes. One is a crude, simple pine piece from Magnolia that is modest and utilitarian. It's joined by a more sophisticated Grecian revival table from White County and an even more elegant table by French cabinetmaker Francis Omer, who brought his French Creole training and influences to Arkansas.

Not far away stands a classic Southern food press from Logan County. The maker intended to carve a star pattern down the sides but, when he got off-center with the second one, he made it into a turkey track instead, to cover the mistake. The pencil marks he used in his efforts are still visible.

"It just shows that this was made by a human being and not a machine in a factory," Millar says. "It's a warm reminder."

Throughout the exhibit, there are some surprising and one-of-a-kind finds. For instance, a wooden cane from Star City with a built-in flashlight. One of the staff favorites is a book of drawings by a young man in Paragould, full of his ideas for inventions. One chest looks like just your typical wooden food press but the resourceful craftsman made it from the barge he used to sail down the Mississippi River to Helena.

Also, Millar points out, "Our conservator calls this the Studebaker of our collection because if you turn it upside down, it looks the same as right-side up.''

A framed envelope bears a watercolor of trees. Artist George Harrod traveled all over the state creating a series of illustrations on envelopes and mailing them.

Not only does the museum have a portrait of Little Rock's Matilda Hanger by antebellum artist Henry Byrd, it also has the jewelry and embroidered shawl she wore for her sitting.

There are other paintings by well-known artists such as Elsie Fruend, who moved to Eureka Springs and gained recognition for her watercolors, jewelry and textiles, and Washington County native Jenny Delony, who started the first art degree program at the University of Arkansas, Fayetteville.

But there are also more obscure pieces, such as a painting of Lead Hill by J. Keller. The town she painted eventually vanished under Bull Shoals Lake and almost nothing is known about Keller.

Millar says, "We have this historic evidence of a place that no longer exists by an artist whose work we only know of through this painting. Two ghosts in one."

Through their research and archival work, the research team has discovered a long line of solid, skilled artisans and craftspeople in Arkansas, dating to the early 1800s.

"There was something in the air that lured people here," Millar says.

People drawn to Arkansas included famed photographer Mike Disfarmer, who set up a studio in Heber Springs and took starkly realistic portraits of everyday people. Then there's Howard Jacob Simon, a New York artist who, with his wife, renowned children's book writer and native Arkansan Charlie May Simon, moved to Perry County to "live off the land" in the 1930s.

Their experiment in homesteading didn't last (neither did their marriage), but his years here resulted in paintings and sketches evoking the time and place. The Family represents Perry County in the exhibit.

And while the depiction of rural Arkansans is seen by many as too stereotypical, Millar ascribes a more benign motive: "I don't think that the artist intended for this to be seen. He painted this for his personal collection. I think he was very fond of this family."

The items on display are not all hand-made. But even the factory-made products can be rather unique. Take, for example, the "banjo-lin," a musical instrument made at a manufacturing company in Fort Smith. In addition to being an odd creation, it also serves to let people know that Fort Smith was a major manufacturing hub in the southwest United States region with furniture manufacturers, iron works and a Whirlpool appliance factory.

The museum's archive goes well beyond its actual collection. It also has a catalog of names, places and photos of pieces that are still scattered across the country and the world.

According to Millar, Museum Director Swannee Bennett and his early team spent countless hours going through microfilm from every Arkansas newspaper, using index cards to catalog every advertisement for cabinetmakers, painters, potters and other craftsmen.

"That was actual proof that these people were here," she says.

The museum hopes to digitize the archives in the future so all the information can be easily accessible online. In the meantime, the public can visit the museum and look through the catalog for information on a favorite artist or even a family member. Some Arkansans have discovered that, for instance, the museum is now home to an ancestor's handmade quilts.

They're currently working on volumes 3 and 4 of their Arkansas Made book series to include more recent acquisitions.

Also during the course of the exhibit, the staff plans to bring a few more collection items out for view, including some of those quilts which, due to their fragility, are rarely shown.

So far, Millar says, the response to the exhibit has been very positive: "It's been fun to watch people roam the galleries and find their hometowns and I think there have been surprises in the pieces that they're finding that represent where they're from. A bread bowl, a shoe mold, glass bottles all speak to these little industries we're no longer thinking about."

Whatever people see, the museum hopes the exhibit will not only give people a glimpse at the variety, breadth and depth of their home state, but also a sense of place and pride. And, perhaps, encourage them to think a little bit about what they may have hiding at home.

People who have heirlooms, paintings or photos they think might be Arkansas made are encouraged to contact the museum team so they can be examined and cataloged.

"That is our mission," Millar says. "To meet with people all over Arkansas and invite them to share with us. ... I hope they go back home and think about what they have that is Arkansas made, that it is valuable. The stuff that's left behind brings meaning to our lives. We're just happy to be able to share this with our visitors. We're still looking." 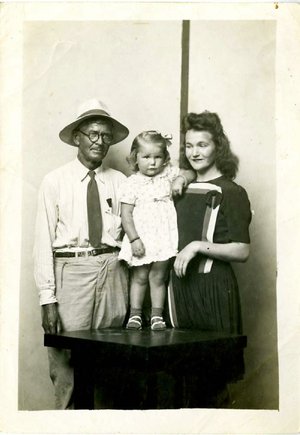 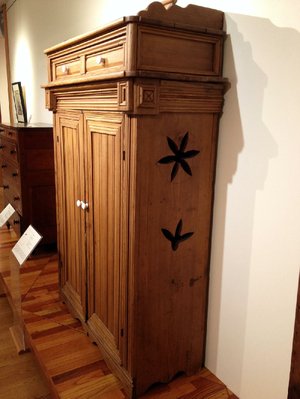 Photo by Jennifer Nixon
A mistake by the Logan County builder gives this handmade chest a spark of personality. It’s just one of the pieces of furniture, artworks, letters and jewelry on display in “All of Arkansas: Arkansas Made, County by County” at the Historic Arkansas Museum. 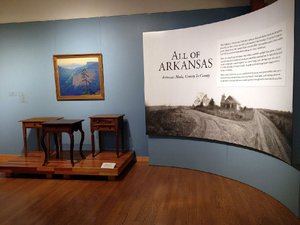 Photo by Jennifer Nixon
Three tables with different woods, designs and skill levels demonstrate the diversity of the state’s products in “All of Arkansas: Arkansas Made, County by County.” 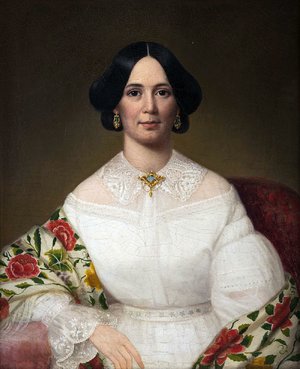 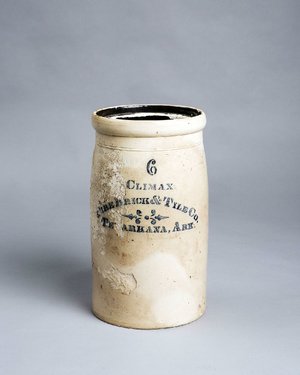 Photo by Historic Arkansas Museum
Pottery, whether simple and utilitarian or more elegant and artistic, has long been a big part of art and manufacturing in Arkansas. This six-gallon churn was made by Climax Fire Brick and Tile Co. in Texarkana.

“All of Arkansas: Arkansas Made, County by County”

Print Headline: Arkansas originals: Exhibit showcases items made in each of the state’s 75 counties over the years