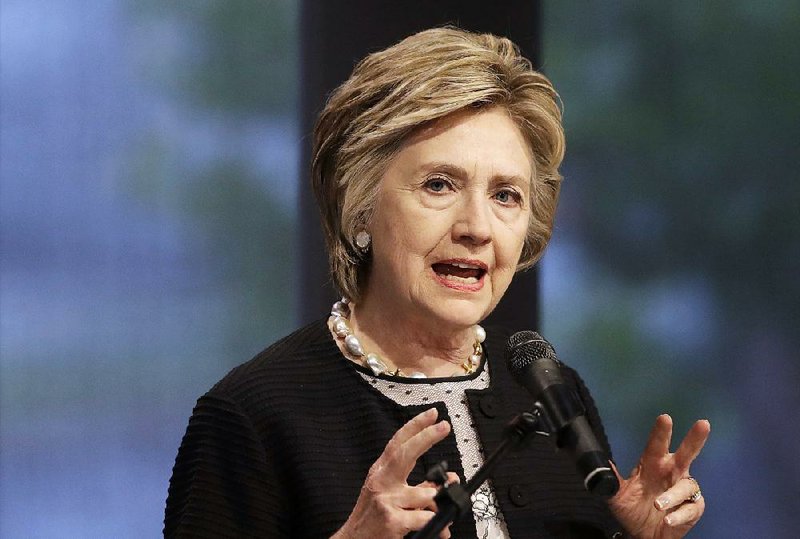 Hours before the 25th anniversary celebration of her husband's election to the White House, former Democratic presidential nominee Hillary Rodham Clinton will autograph copies of her best-selling memoir Saturday, a book that reflects on her unsuccessful 2016 campaign.

What Happened, which debuted Sept. 12, continues to rack up sales. It'll be seventh on the Sunday New York Times nonfiction best-seller list.

The Books-A-Million event starts at 10:30 a.m. Saturday in the Governor's Hall of the Statehouse Convention Center in Little Rock. Tickets must be purchased at hillaryclintonbam.eventbrite.com, which also lists the rules for the event. Tickets cost $30 each, plus taxes and fees, and include a book and guaranteed chance to meet Clinton.

The book-signing provides another avenue for Clinton fans who want to see the former secretary of state, U.S. senator, Arkansas first lady and U.S. first lady.

More than 3,200 tickets have already been snapped up for her free Saturday afternoon appearance with former President Bill Clinton and political strategist James Carville. That event, celebrating Bill Clinton's election, starts at 4:30 p.m. and is part of the Frank and Kula Kumpuris Distinguished Lecture Series.

Christine Corbitt, a spokesman for Birmingham, Ala.-based Books-a-Million, said What Happened sales in Arkansas are brisk, and a Little Rock sellout is anticipated.

"It's the only book-signing that's scheduled for that weekend, so we do anticipate it going quickly," she said.

Hillary Clinton has heavily promoted her book since its release, drawing big crowds for her speaking engagements and book-signings.

Four of her five December book-signings have already sold out. They are in Concord, N.H.; Rhinebeck, N.Y.; Denver and Seattle. (Tickets for Hillary Clinton's Pasadena, Calif., stop are still available.)

In What Happened, Hillary Clinton shares what it was like to run against Independent Bernie Sanders in the Democratic primaries and Republican Donald Trump in the general election.

She accepts responsibility for her narrow loss but assigns blame as well, singling out the Russian government and former FBI Director James Comey for their role in the campaign.

She also gives credit to Natural State supporters, saying they helped her gauge how the campaign was going.

"I had trusted friends reporting back to me from all over the country, including a big group of Arkansans -- the Arkansas Travelers -- who fanned out in nearly every state. I believe they helped us win the razor-close Missouri primary, and they were a constant source of information and perspective for me," she wrote.

She also recounts Democratic U.S. Sen. Mark Pryor's defeat by then-U.S. Rep. Tom Cotton, a Republican, portraying it as an early warning sign that 2016 would be a challenging year for Democrats.

In the Ozarks, Democratic stances on guns and gay marriage weren't popular, she said.

In Arkansas, "the politics of cultural identity and resentment were overwhelming evidence, reason and personal experience," she said.

She makes clear, later on, that she still had allies in her husband's home state.

"I got whacked in Arkansas as a whole, but I won Pulaski County, home of Little Rock, the state's vibrant capital city, by 18 points," she added.

This will be Hillary Clinton's first appearance in Little Rock since that election.

Hundreds of people who worked on the Clintons' campaigns in 1992, 1996, 2008 and 2016 will be gathering this weekend to celebrate the 25th anniversary of Bill Clinton's initial election to the presidency.

A few dozen of the $26 seats are still available and can be reserved by emailing politicalanimalsclub@gmail.com, club president Shane Broadway said.