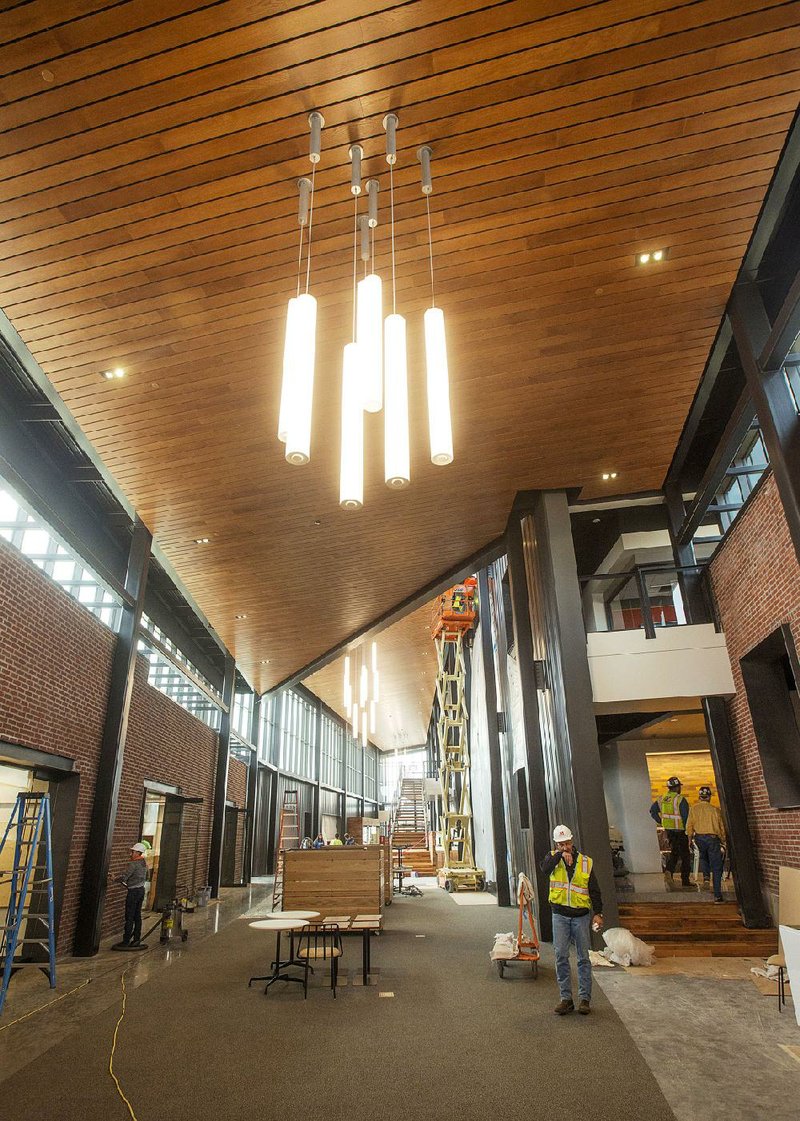 Workers finish up construction inside the new Tyson Foods building in downtown Springdale on Nov. 8. The facility on East Emma Avenue includes the former Tyson headquarters and the Brown Hatchery building.

SPRINGDALE -- Tyson Foods' new tech building has Baggo boards and pingpong tables to attract younger workers, but company officials said Tuesday that they value the collaborative workspace as a catalyst for transforming downtown Springdale into a tech hub for Northwest Arkansas.

"Our vision is to make this the new tech town," Scott Spradley, chief information technology officer, told a crowd Tuesday inside the newly renovated building. "As I talk with my friends at Wal-Mart and JB Hunt and Rockfish and other technology companies, I really have a vision about getting them to look at this as a technical center as well."

The 56,106-square-foot building is to house about 250 Tyson information technology workers, who are scheduled to move in just after Thanksgiving. Plans are to bring total Tyson employment downtown to about 400 in the new office space and the company's JTL building down the road.

"What you won't see in this building are any offices for people to sit in," Spradley said. "What you will see is collaboration rooms for all of us to sit in. It's my dream that we move to more of a collaborative nature, that we really embrace what's going on in the world today."

Located at 516 E. Emma Ave., the renovated space is the former site of the company's original headquarters and the Brown Hatchery building.

When planning the tech center, Tyson Foods looked at design trends that attract millennial and generation Z workers, such as unconventional environments with flexible furniture and fewer cubicles.

"When you open it up," he said, looking at the renovated room. "The brain expands and people begin saying 'hey' these things are possible, and that's what we're trying to achieve here."

Spradley said he'd like Tyson to have Friday events at the new location, where venture capitalists, creatives, and technologists can bring cultural value to downtown Springdale.

John H. Tyson, heir and active chairman of the board at Tyson Foods, said coming back to Emma Avenue -- after his father moved company headquarters closer to the family property in 1969 -- has been a "full circle" moment.

The building has reclaimed wood from the original headquarters first constructed around 1920, which was owned and operated by company founder John W. Tyson.

"I think about the conversation Dad had with me ... about leaving Emma Street," Tyson said. "I think today my grandfather and father would be happy that we reconnected."

"We truly thank Tyson Foods and all those involved for making this happen," Springdale Mayor Doug Sprouse said. "This is a facility, and a gift, and a catalyst to continue this downtown revitalization effort."