Arkansas senator, businessman dies at 50 after battle with cancer 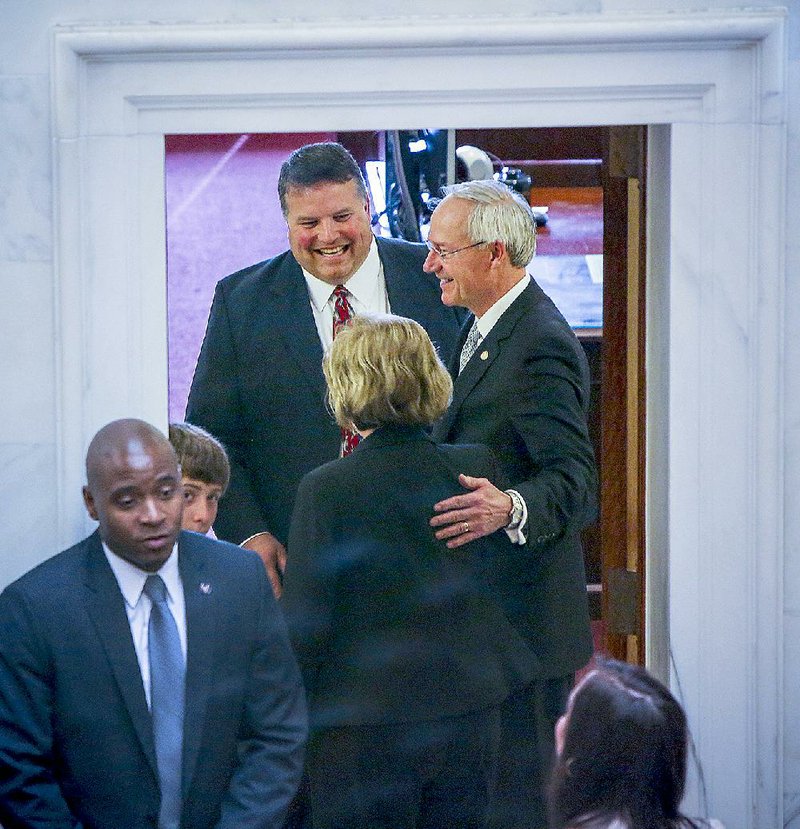 Sen. Greg Standridge (top left), R-Russellville, greets guests Wednesday, April 22, 2015, as he chats with Gov. Asa Hutchinson in a room just off the Senate floor. Shortly after the photo was taken, Standridge, who won a special election last week, took the oath of office.

A 50-year-old Arkansas businessman who served in the state Senate for two years died Thursday morning after a battle with cancer, officials said.

Greg Standridge, R-Russellville, had represented District 16 since 2015. That district includes Newton and Pope counties as well as portions of Boone, Carroll and Van Buren counties.

After learning of his death Thursday morning, a subcommittee of the state Highway Commission observed a moment of silence in memory of Standridge.

In a statement, Arkansas Gov. Asa Hutchinson called Standridge "a friend and a dedicated public servant."

"I recently visited with Greg in his home, and even with his illness, he was a source of encouragement and strength," Hutchinson said. "Greg served his community with distinction, and he loved his family most of all."

Republican U.S. Rep. Steve Womack said: “Our hearts are broken to hear of the passing of Greg Standridge. This is a great loss to both the city of Russellville and our state.”

President Pro Tempore Sen. Jonathan Dismang, R-Beebe, said he became a better person because of his friendship with Standridge, adding that the state is better because of his leadership.

“To know Greg was to love him. He brought joy and kindness with him wherever he went,” Dismang said.

Lt. Gov. Tim Griffin called the senator’s death “a tremendous loss for our state," noting that Standridge was a "tireless advocate."

Jerry Cox, president of the Family Council, said Standridge’s “passing marks a loss for us all.”

“Our thoughts and prayers are with Senator Standridge’s family and friends during this time,” Cox wrote in a statement.

In 2015, he filled a vacancy created by state Sen. Michael Lamoureux, who resigned to become Gov. Asa Hutchinson’s transition director and chief of staff. Lamoureux has since left that post.

In addition to his work in the legislature and in business, Standridge worked as a volunteer fireman and member of the Pope County EMS Rescue Squad.

He was a native of Russellville and attended Arkansas Tech University, according to his legislator biography. Standridge and his wife have four children.

Information for this article was contributed by Mike Wickline of the Arkansas Democrat-Gazette.