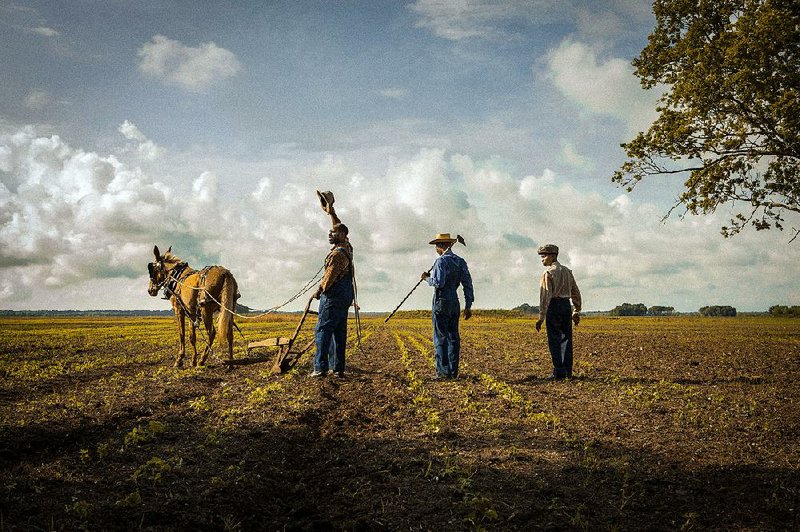 After a -- literary and figuratively -- dark opening scene, Mudbound seemed to unfold as an idyllic rural ramble across the Mississippi Delta, a few years before the start of World War II.

Don't fall for that. The film doesn't get rolling until the end of the war, and there's nothing idyllic about what's to come when soldiers return home.

Based on Hillary Jordan's 2008 novel, this unsettling and thought-stimulating story starts out with the promise of delight as well-reared and cosseted Laura (Carey Mulligan), a virgin at 31, unites with taciturn Memphis businessman Henry McAllan (Jason Clarke) in a marriage that she views as a chance to escape her strict upbringing more than the start of a blissful life overflowing with true love. It's evident she finds Henry's charming brother Jamie (Garrett Hedlund) more suitable, but that's not an option.

How right she turns out to be. Shortly after their first baby arrives, Henry joyfully announces that the family is packing up its comfy suburban home to become cotton farmers -- supported by the labor of share-tenants -- in the Mississippi Delta. And they'll be accompanied by Henry's churlish father, known as Pappy (Jonathan Banks, who plays Mike on Breaking Bad).

Laura is stunned, but dutiful. And uncomplaining, even when Henry's efforts to rent a decent house near the farm fall apart and they're forced to inhabit a gap-walled shack with no plumbing or electricity. Her only stipulation: Her piano, which takes up more than its share of space, stays. Pappy can sleep in the lean-to.

Getting accustomed to the hard work of a farm wife and mother includes figuring out how to respectfully coexist with Hap Jackson (Rob Morgan), his wife, Florence (Mary J. Blige), and their children, whose back-breaking work on the farm nets them a roof over their heads and a hardscrabble living. Laura struggles to make sense of her husband's overlord tendencies while maintaining peaceful relations under her own roof. Pappy, a mean-spirited bigot opposed to just about everything, doesn't make her efforts any easier.

As too much rain pours down and the farm founders, the war begins. Jamie heads off to Europe to become a fighter pilot. Hap and Florence's son Ronsel (Jason Mitchell) is assigned to a tank division. Both survive, with memories that no one would want.

War is hell, but it's nothing compared to the vicious racism that continues unabated in the South. Returning as a war hero doesn't mean much for Ronsel, not with the Klan around. He fights back, as does newly enlightened Jamie. The results are horrific. But not surprising.

The power in this dark film, shot in the blurry downpour that was the rural outskirts of New Orleans in the summer of 2016, benefits from the muscular performances by Hedlund and the always compelling Banks. As good as they are, they're overshadowed by two fine female presences.

Mulligan, tiny and tough, is the personification of the fundamental Southern meme of steel magnolia.

And pop icon Blige, nearly unrecognizable without flashy wigs, eyelashes, makeup, and glamorous attire, is a tower of strength and mercy as her character battles to support her besieged family through one hardship after another -- including one that is mercilessly barbaric.