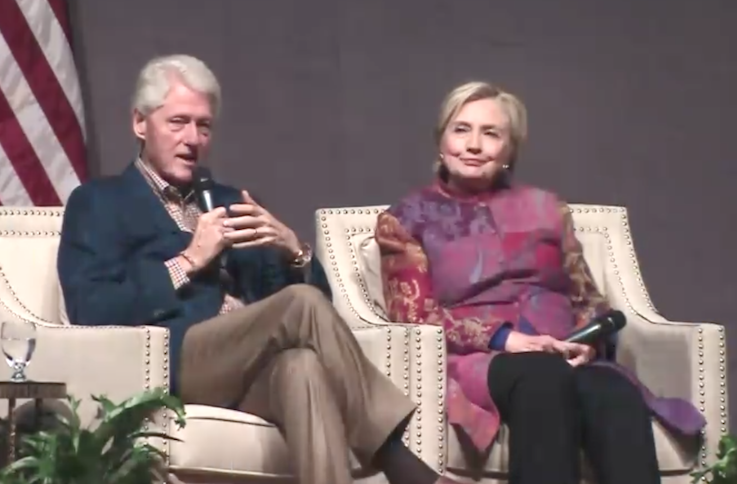 Bill and Hillary Clinton are shown in this screenshot from the Clinton School of Public Service live broadcast of their lecture Saturday night in Little Rock.

The talk, part of the Frank and Kula Kumpuris distinguished lecture series, drew supporters and former staff members from the Clinton administration.

After watching a highlight reel of the 1992 campaign, Carville asked the Clintons to reflect on campaigning in New Hampshire during the 1992 presidential push, as Bill Clinton's poll numbers quickly dropped.

Bill Clinton paid tribute to the Arkansas Travelers, a grassroots group who traveled to more than 20 states to drum up support.

“If it hadn’t been for the people of Arkansas, there weren’t enough of us to go around. We wouldn’t have made it. So, thank you,” he said.

Hillary Clinton said she remembers finding a “really receptive audience” in the New Hampshire. Her husband's remarkable second place finish turned the campaign around, she said.

Both the former president and the former secretary of state also reflected on the economic success during Bill Clinton’s eight years in the White House.

Bill Clinton said the newly revived enthusiasm for trickle down economics is the wrong way to go.

“I hate to see it go down that road again, because we’re going to hit the same dead end we did before," he said.