VIDEO: At Little Rock reunion, Bill and Hillary Clinton, allies look back at ’92 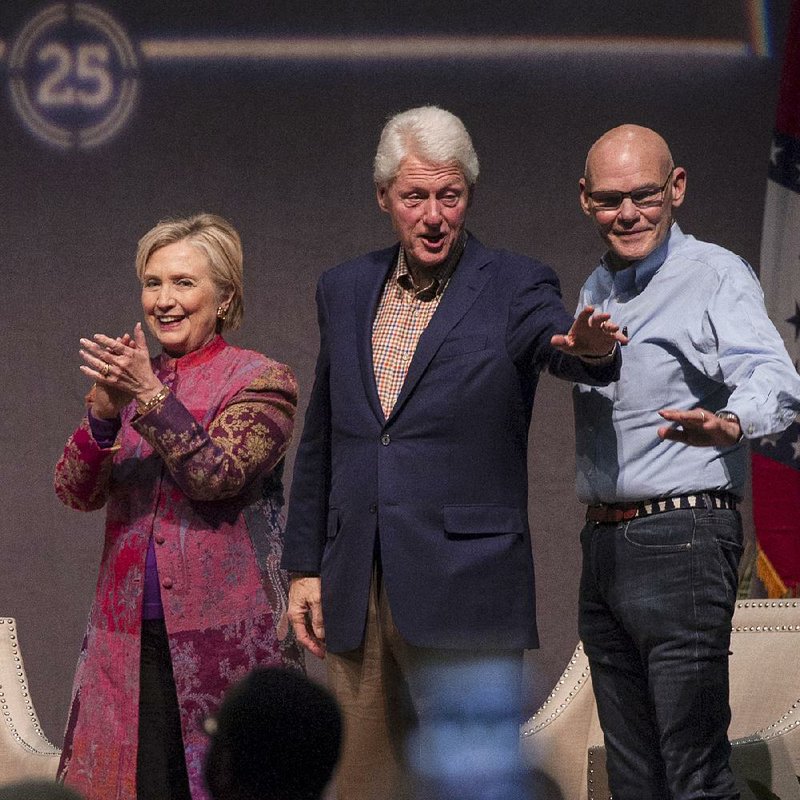 Hillary and Bill Clinton reminisced about the former president’s White House run and their shared time in public office in front of supporters, past staff members and Democratic Party legacies in downtown Little Rock on Saturday.

The former president and former secretary of state took the stage at the Statehouse Convention Center, which seats 3,200, at 101 E. Markham St.

James Carville moderated the discussion. The “Ragin’ Cajun” is a well-known political commentator and was a lead strategist on Bill Clinton’s successful presidential bid.

Note: The video starts at the 19 minute mark

On Saturday morning, before the talk, Carville walked through Little Rock’s River Market District with his daughter.

Carville, dressed in a Louisiana State University sweatshirt, said he was showing his daughter around the city, including a stop at the old “war room,” the 1992 campaign headquarters where Clinton supporters strategized.

Carville recalled that campaign with his first question. He asked the Clintons to remember a chilly New Hampshire primary, when Bill Clinton’s poll numbers were dropping “faster than a thermometer.”

Bill Clinton said he was touched by the devotion from the Arkansas Travelers, a grass-roots group that took out an ad in a New Hampshire newspaper listing their personal phone numbers, telling voters to call and ask why he should be the next president.

“If it hadn’t been for the people of Arkansas, there weren’t enough of us to go around. We wouldn’t have made it. So thank you,” Bill Clinton said.

He later drew a contrast between crafting a message that resonated with people back then and in present day.

“They weren’t interested in how bad you could badmouth your opponent,” he added.

Carville then asked the Clintons to reflect on Bill Clinton’s years in the White House, touting their economic, environmental and foreign policy initiatives, including the Children’s Health Insurance Program.

“They were dead wrong. Now we’re hearing the same baloney today,” she said.

When Bill Clinton fought to end “The Troubles,” an ethno-national conflict that besieged Northern Ireland at the time, he took a major risk, Hillary Clinton said. It was slow-going, she said.

“He didn’t tweet about it. He got to work about it,” she said.

In discussing her 2016 campaign for president, Hillary Clinton said it astonished her what potential voters believed about her.

The Arkansas Travelers, who campaigned for her in different states, would speak with people on their front porches, she said.

“More times than you could believe, they’d get an answer like, ‘I can’t support her. She killed somebody,’” Hillary Clinton said, referring to a conspiracy theory about her and Bill.

The conversation often turned to Arkansas, its people and its politics. Bill Clinton called the state a “laboratory of democracy and innovation” when, as governor, he announced his candidacy for president on the Old State House steps.

“Well, here in Arkansas we’ve done our best to create jobs and educate our people. And each of us has tried to be one of those thousand points of light,” Bill Clinton said, according to an archived version of the speech.

On Saturday, he referred to Arkansas as a “laboratory of training” for his time as president.

He later told those in the audience why they should still be optimistic about their future and their children’s future.

“Having lost it, I can tell you youth matters,” Bill Clinton said.

He remembered a young man with a thick accent whom he met in Appalachia during his presidency. The teen had dedicated himself to nanotechnology, satellites and scientific progress.

“That young man did not feel the walls closing in on him,” Bill Clinton said. “He felt the walls opening up.”

As the conversation wound down, after multiple standing ovations, Carville referred to Hillary Clinton’s loss in the 2016 election to President Donald Trump.

To reflect, Hillary Clinton said she did yoga, cleaned her closets and spent time “reading a lot of mysteries, because the bad guy always got it in the end.”

But ultimately, she wants to analyze the loss, which she said she does in her new book, What Happened.

The Natural State was a place where she was “whacked” during the 2016 election, she wrote. Trump took 60.6 percent of the popular vote in Arkansas.

Hillary Clinton wrote that a common but unrecognized tendency in American politics is that Republicans win in places where more people are pessimistic, while Democrats win where people are optimistic.

Arkansas exemplifies this, she wrote. Hillary Clinton lost the state, “but I won Pulaski County, home of Little Rock, the state’s vibrant capital city, by 18 points.”

“When I talk about what happened, I’m very focused on making sure it doesn’t happen again,” she said Saturday.

Emanuel endured a turbulent flight Saturday, arriving in time for the Kumpuris lecture.

His reason for attending, he said, was simple.

“It’s the 25th anniversary of the election of President Clinton, and I wanted to say thank you,” he said.

Emanuel served as the finance director for the 1992 campaign and followed Clinton to Washington, where he served as a senior adviser to the president.

Emanuel went on to win a seat in Congress and serve as President Barack Obama’s chief of staff before taking the helm of the nation’s third-largest city.

“I would never be in politics at the level I’m doing if it wasn’t for Bill Clinton giving me a shot,” Emanuel said.

Emanuel is no stranger to Arkansas’ capital city.

“I just spent about a year of my life living here,” he said. “Bill Clinton is more special, but I love the people of Little Rock.”

Griffin, who leads the nation’s largest gay-rights organization, is based in Washington but traveled to Little Rock for the events.

The 1992 campaign was a pivotal moment in Griffin’s life.

“I was 18 years old, and I was inspired by my governor and first lady to sign up for a career in public service and I had the opportunity of a lifetime to volunteer on that campaign,” he said.

After Clinton’s victory, he headed for the White House. At age 19, he was the youngest presidential staff member.

“You look around this room, and the Clintons gave people opportunities from all across this country. To see everybody back here … it’s great,” he said.

Earlier Saturday, hundreds of people lined up around the Butler Center for Arkansas Studies in Little Rock, hoping for a handshake from Hillary Clinton at her book-signing.

One person in line, Abigail Ruttenberg, said she thinks she was the youngest paid staff member on Bill Clinton’s 1992 campaign.

She was 17 and couldn’t vote. But Ruttenberg said she helped answer the thousands of letters that poured into the correspondence office. She sprinkled Yiddish phrases in the letters that referred to Jewish traditions, she said.

Ruttenberg journeyed to Little Rock from her home in Dallas to “remember the excitement” from 25 years ago, she said.

Another woman, Lara Noah, was in messy tears after she met Hillary Clinton. Noah said she was a registered Republican until she heard Clinton’s beliefs on child care, expressed in her book It Takes a Village.

“You just don’t get to meet your heroes every day, and today I got to meet mine,” Noah said. “And I can’t stop crying.” 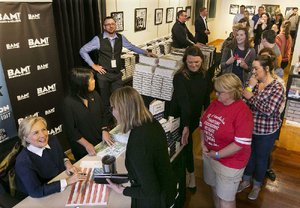 Photo by Benjamin Krain
Hillary Clinton signs copies of her books Saturday morning at the Butler Center for Arkansas Studies in Little Rock. People waited in line for up to four hours to get her autograph.

Print Headline: At LR reunion, Clintons, allies look back at ’92