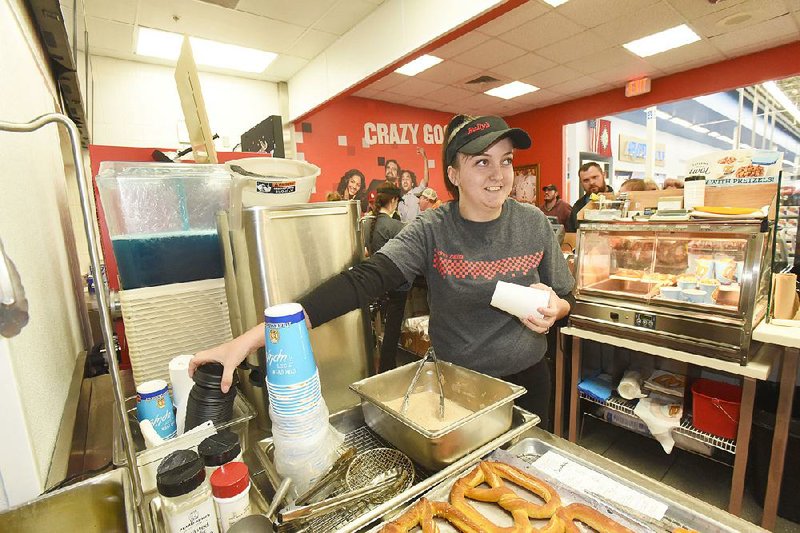 Ashley Boggess works at the Rally’s restaurant inside the Wal-Mart Supercenter in Bentonville earlier this month. The burger chain has 14 restaurants in nine states that are in Wal-Mart stores.

The Bentonville Wal-Mart Supercenter, a stone's throw from the mega-retailer's home office, is now the home of the area's first Rally's restaurant.

Guy Mace said the restaurant in the Wal-Mart store on South Walton Boulevard is his ninth in a Wal-Mart store and his first Rally's franchise. He said the brand is a good fit for Wal-Mart, offering good food at a reasonable price. The store also has an Auntie Anne's pretzel shop.

Mace of Springfield, Mo., is a partner and founder of TH Treats 1 LLC, which operates the Rally's franchise. He's invested in a variety of food operations around the nation, including Auntie Anne's, Noble Roman's Pizza and Carvel, an ice cream and custard business. Mace said the Rally's brand was really attractive, and he jumped at the chance to put an operation close to the Wal-Mart headquarters.

"They're a fun brand with the catchphrase 'Crazy Good Food,'" Mace said of Rally's during a recent interview. "They offer hearty food at a good value with a creative menu that's constantly evolving."

Mace said the restaurant will operate with a staff of 18-25, and this store will initially open from 10 a.m to 10 p.m. but may end up remaining open later if customer demand is there.

The Bentonville location is the ninth Rally's restaurant in the state and the first one run as a franchise. The other Rally's locations are in the central part of the state with three in Little Rock, two in Pine Bluff and one each in Conway, North Little Rock and Jacksonville. They are all owned and operated by the company.

In May, Oak Hill Capital Partners acquired Tampa, Fla.-based Checkers Drive-In Restaurants Inc. which is known as Checkers & Rally's in a deal valued at about $525 million. Checkers acquired Rally's in 1999, and in areas where the Rally's brand was dominant, it maintained that branding.

Over the years the restaurants have become similar in look, style and food offerings. Today there are more than 840 restaurants in the chain with about 250 of those owned by the company itself.

"We believe Checkers is well-positioned to continue its long history of consistent growth," Tyler Wolfram, managing partner at Oak Hill said in a release at the time of the acquisition.

According to the report Fast Food Restaurants in the U.S. by research company IBISWorld and released in October, the industry has seen steady growth over the past five years as convenience and affordable foods remain popular with consumers. The report noted that while low price usually gives fast food a competitive advantage, higher consumer spending on meals has increased overall competition across the food services sector.

"The fast food restaurants industry will continue to play an influential role in the U.S. food services sector over the next five year," Andrew Alvarez, food industry analyst at IBISWorld said in a statement. "However, the industry will remain highly competitive, forcing fast food chains to compete on price and service, which will ultimately restrict the industry's revenue and profit growth. Revenue growth is expected to be subdued, increasing at an annualized rate of just 1.6 percent to $265.7 billion over the five years to 2022."

Checkers & Rally's Director of Franchise Development Robert Bhagwandat said typical Rally's locations are drive-thru operations, but experiments with sit-down restaurants in retailers such as Wal-Mart have been successful.

Bhagwandat praised Mace's business acumen and said he was the right man to represent the brand in the Wal-Mart Supercenter right across the street from the giant retailers headquarters. He said the Rally's & Checkers brand is well targeted at the typical Wal-Mart shopper.

Bhagwandat said Rally's has 14 restaurants in nine states that are in Wal-Mart stores, with six more under construction.

Drew Lever, senior director of Wal-Mart services, oversees leased space in the company's stores. He said the retailer has a process it uses to select lessees for particular locations but it's guided mostly by customer demand. He said convenience offerings, like restaurants are typical lessees for the stores.

"Folks get hungry as they shop at all times of the day," he said. 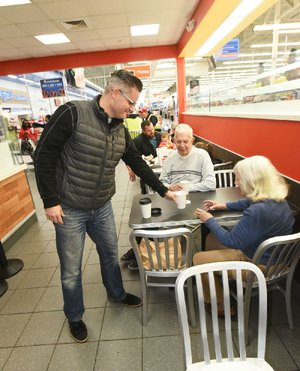