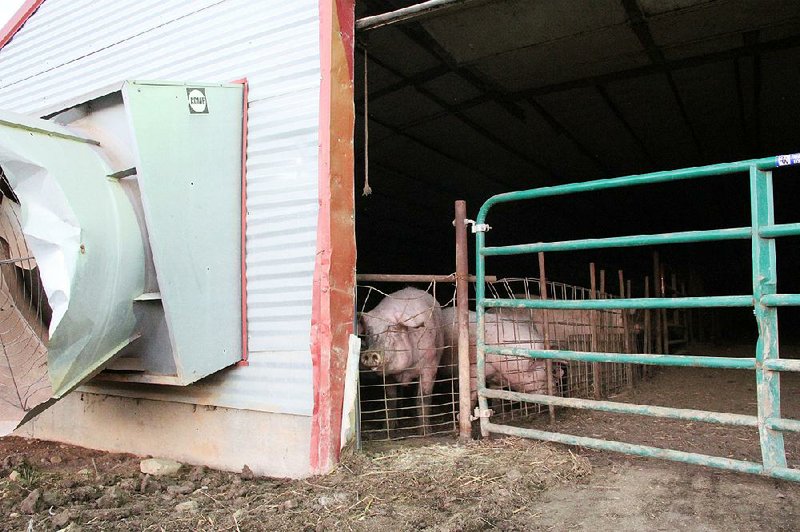 FILE — Sanders Farm in Newton County contained as many as 3,200 hogs this summer, with some let loose to roam outdoors to alleviate crowding.

HARRISON -- A 2,400-hog farm in the Buffalo River watershed must clean up the manure on its property within the next 60 days, a Boone County circuit judge has ordered.

Sanders Farm, in Newton County, must empty a barn of dry pig manure, revegetate land and keep the hogs on its property, Judge Gail Inman-Campbell said.

A neighbor complained to the Arkansas Department of Environmental Quality about manure running off from Sanders Farm in July, and, after taking a month to investigate the complaint and three months to send the farm a letter on its findings, the department took Sanders Farm to court Nov. 7 to shut it down.

At the time of the complaint and investigation, Sanders Farm had been letting pigs roam freely and had placed piles of dry manure outside protected barns, exposing them to rainfall that could run off onto nearby lands, including Cedar Creek, which drains into Davis Creek, which drains into the Buffalo River. Department officials in August saw dark brown stormwater runoff crossing the county road and nearing Cedar Creek. They determined that the runoff contained manure.

The department, arguing that the operation effectively contained liquid animal waste, said the farm was violating environmental laws with the maintenance of the site and by not having a permit to operate. New medium and large confined animal operations that use liquid waste disposal are banned in the Buffalo River's watershed until 2020, pending research on C&H Hog Farms' effect on the river. Sanders Farm is a medium-sized confined animal operation.

On Nov. 7, shortly after the department filed its complaint, Judge Gordon Webb granted temporary injunctive relief against Sanders Farm for 10 days, a period that ended Thursday.

On Thursday, Inman-Campbell, who was reassigned the case, heard testimony from the department and Patrick and Starlinda Sanders about their farm just outside Western Grove.

The Sanderses started the farm in August 2015, intending to run a dry litter operation, which does not require a permit from the department, they testified. They did not obtain a nutrient management plan for the project, however, which was required.

But the Sanderses ran into trouble earlier this year when their pigs began to get sick, they testified. The pigs kept reproducing, but the Sanderses couldn't sell them because of their illnesses.

The Sanderses eventually had about 3,200 pigs on their land when a neighbor complained to the department.

Since then, the Sanderses have been able to reduce the number of pigs to about 2,400, Patrick Sanders testified.

"We did make mistakes," he said after the hearing. "We were just totally overwhelmed."

Tracey Rothermel, an attorney for the department, asked Inman-Campbell to order the Sanderses to clean up their property and sell all of their hogs as a part of an injunction against the couple.

The Sanderses had agreed to clean up their property but protested selling all of their pigs because of the damage it would cause to their livelihoods.

Rothermel argued that an injunction was needed because no monetary penalties could reduce the environmental harm already caused by Sanders Farm.

"What damages can you pay to the environment?" she asked.

Inman-Campbell said she was not ready to ask the Sanderses to sell their pigs but ordered the other remediations of the property within 60 days. She will hold a follow-up hearing Jan. 12 to determine compliance.