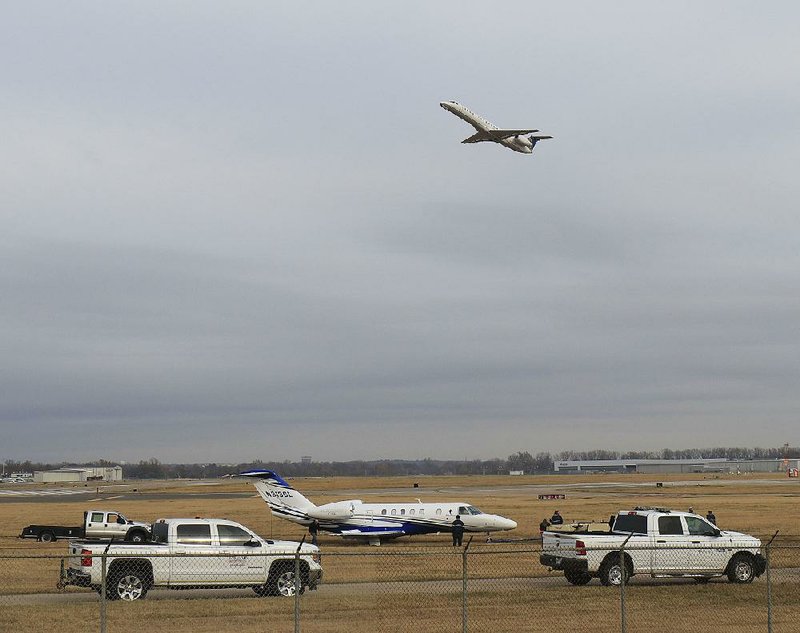 A Cessna Citation CJ4 jet is prepared to be towed Tuesday morning at Bill and Hillary Clinton National Airport/Adams Field after it ran off the runway late Monday night.

No injuries were reported when a jet aircraft suffered a brake failure and ended up in a grassy area late Monday at Bill and Hillary Clinton National Airport/Adams Field.

In a statement, Little Rock airport spokesman Shane Carter said a Cessna Citation CJ4 landed shortly before midnight at a runway on the side of the airfield for general aviation use.

The pilot, Greg Hatcher of Little Rock, reported that the aircraft's brakes did not function properly, causing him to turn the aircraft to a grassy area at the end of the runway in order to stop it, the airport said.

The jet was registered to Charter Express Inc. and was arriving from Las Vegas.

Hatcher and one other passenger were on board at the time, Carter said.

Two other runways at the airport, including its main commercial runway, remained open at the time.

The Federal Aviation Administration was set to investigate any damage to the plane Tuesday.