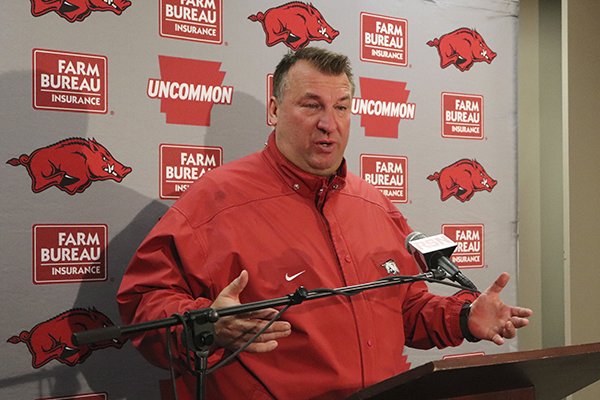 Bret Bielema speaks with reporters beneath Razorback Stadium in Fayetteville, Ark., Friday, Nov. 24, 2017, after being fired as Arkansas’ football coach. Bielema said he was fired minutes after walking off the field following a 48-45 loss to Missouri dropped the Razorbacks to 4-8, 1-7 in the Southeastern Conference. (AP Photo/Kelly P. Kissel)

FAYETTEVILLE — Bret Bielema will not get to fulfill his dream of leading the Arkansas Razorbacks to their first SEC championship.

In his post-game news conference, Bielema said he was told moments after the game ended that he "would no longer be the coach at Arkansas from this point forward." Cromer Peoples said she told Bielema of his dismissal in his office near the locker room.

"I've never been let go of in my entire life, so this is a first for me," Bielema said. "I've had quite a few coaches that have moved on and they always kind of say, whether it's right, wrong or indifferent, that you want to leave the place better than when you got here. And I know that's happened. There's no doubt."

Bret Bielema through the years

In a statement, Cromer Peoples said the team under Bielema has "not been able to sustain the success on the field that is expected and required at the University of Arkansas."

"There is no question that Coach Bielema has been a valued and respected member of our department and has made a positive impact on the lives of our student-athletes, including supporting them in their pursuit of graduation," she said. "We are grateful for his contributions to our program and most importantly his investment in the lives of our student-athletes. We wish him the very best both personally and professionally."

Bielema's termination letter says his firing "is in the best interest of the football program and the University."📄 The document, signed by Cromer Peoples and featuring a notation that it was hand-delivered, directs Bielema to return University-issued computers, cellphones and vehicles before the end of the month and says he will "receive all salary and incentive compensation earned through today."

Cromer Peoples said in her statement that she expects the search for Bielema's successor "will attract the interest of many of the top coaches in the nation.”

Speaking to reporters later Friday, Cromer Peoples said she had been evaluating Bielema "literally through the game today" before making the decision to fire him in consultation with Chancellor Joe Steinmetz.

"We must win games," she said. "Therefore we made the determination that it was time to make a change at the head coaching position."

Cromer Peoples defended her decision to tell Bielema immediately after the game, saying she was concerned that waiting would prevent Bielema from telling his players in person.

"Once I knew that this was going to be our decision, I thought it was important to move quickly after the game," she said. "That's why we did what we did."

Defensive coordinator Paul Rhoads will serve as interim head coach. Cromer Peoples said the search for a permanent successor will begin immediately, and she will lead it.

"I will call who I need to call in order to make the best decision for us," she said.

Bielema's best record was 8-5 in 2015 with a third-place finish in the rugged SEC West at 5-3. His 2016 team was in position to improve on that record, but the Hogs blew huge leads against Missouri and Virginia Tech in their final two games. Including the 28-24 loss at Missouri, the Razorbacks are 4-10, including 1-10 against Power 5 opponents.

In his remarks Friday, Bielema noted that "probably six of our top nine or 10" players suffered injuries that knocked them off the field for extended periods, calling that not an "excuse" but the "reality of the depth that we've got and where we're at."

"I know we wanted more wins," he said. "I know we all want this. We were on a steady climb and ran into a speed bump that we just never were able to really get back out of. We were on a steady win cycle with three, then seven and then eight, and then it looked like we could possibly get to eight, nine, 10 and didn't play well down the stretch a year ago."

Bielema's firing had been expected for the last several weeks and became all but certain after Steinmetz fired Athletic Director Jeff Long on Nov. 15. Long had been a staunch supporter of Bielema, particularly due to the football team's performance in academics and off-the-field behavior.

In an early season talk with reporters after an appearance at the Northwest Arkansas Touchdown Club, Long said, "I support Bret Bielema and he is our coach and he's doing a good job. And you know what, with a few more wins he's doing an incredible job."

The increased win tally simply did not materialize.

Bielema, whose salary before bonuses is $4.2 million this year, is owed a substantial buyout for the remaining three years on his contract, which was extended to Dec. 31, 2020 in early 2015. The Arkansas Democrat-Gazette reported the buyout as $5.9 million between today and Dec. 1, based on language in his original contract and an amendment added in early 2015 after the Razorbacks routed Texas 31-7 in the Texas Bowl.

However, sources have indicated Bielema could also have an agreement with the Razorback Foundation that could increase the amount owed to him. The severance is expected to be negotiated and also subject to mitigation by Bielema's future employment.