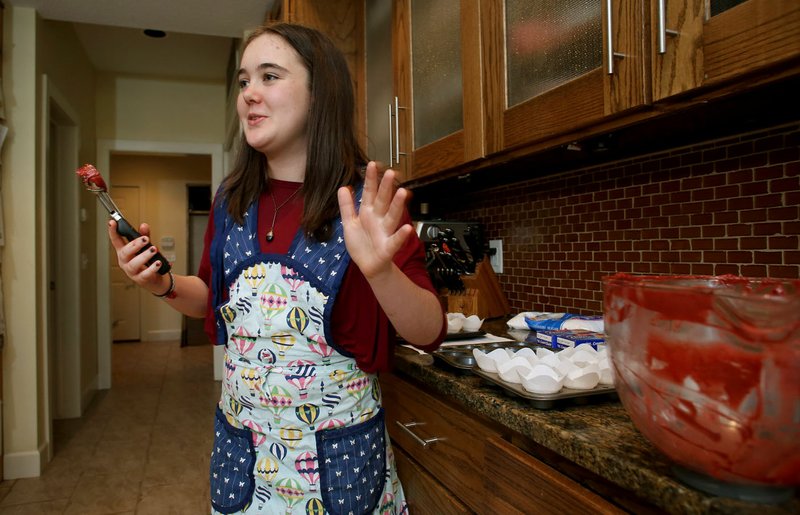 NWA Democrat-Gazette/DAVID GOTTSCHALK Gable Sloan, 12, describes Nov. 16 the importance of her Christmas Tree Art display as she bakes red velvet cupcakes in the kitchen of her family's house in Fayetteville. Gable hopes the display, which will move to different businesses during the holiday season, will help bring attention to the issue of student homelessness. Gable operates Gable's Bakery, a nonprofit bakery and catering business.

FAYETTEVILLE -- Residents and visitors may soon notice a Christmas tree covered in socks -- 395 socks to be exact -- making its way to Northwest Arkansas businesses.

The project is the first leg of an endeavor by Gable Sloan, Woodland Junior High School seventh-grader, to raise awareness about the realities and impact of poverty on academic achievement.

• Natural and other disasters

Barriers to education for homeless children and youth:

• Living in hotels, motels, or trailer parks or campgrounds due to lack of affordable housing

• Living in emergency or transitional shelters

• Migratory children living in the above situations

The 2017 Community Christmas Card campaign sponsored by the Northwest Arkansas Democrat-Gazette begins Monday. All donations go to help students in Benton and Washington counties in Arkansas and McDonald County, Mo.

Donors can designate which school district receives their donation. Individuals may deliver tax-deductible donations to any Northwest Arkansas Democrat-Gazette office, including daily and weekly publications, until noon Dec. 22.

The names of individuals donating $2 or more will be in a full-page Christmas card published Dec. 25 in the daily papers and Dec. 27 or Dec. 28 in the weekly papers. Donations received after deadline will not have names published in the paper. Donations also can be mailed to the paper at Northwest Arkansas Newspapers, c/o Community Christmas Card, P.O. Box 1607, Fayetteville, AR, 72702.

Checks should be made to the United Way/Community Christmas Card. Online donations are accepted at nwadg.com/christmascard.

Over the past 10 years, the number of homeless children in the School District has grown by 56 percent, from 220 to 395 students, according to the 2017 NWA Homeless Point in Time Census. The Christmas tree is one of several efforts this holiday season to bring awareness to the issue and raise money to help those students and their families through tough times.

"The tree is really to represent and make people understand the huge number of students who are in need in our community," Gable said. The socks will go to The Outback, the School District's food pantry.

Money raised will go to the district's Families in Transition program, which is set up to help children and families with enrollment, transportation and school meals. The program also helps them with clothing, school supplies and connects them to resources in the community.

The program has worked with families who moved to the area for job opportunities and great schools, Shirley said. However, leaving a support system of family and friends can sometimes create uncertainty when it comes to housing and other basic needs.

Children in a situation such as this don't worry about learning or homework, but about where to sleep or where to get something to eat, according to the program's website.

The organization counts on community support to reach and meet the needs of these children and families, she said.

"It's a growing need. Even though Northwest Arkansas is growing so quickly, with that growth also comes opportunity for challenges," she said. "We've got to slow down enough to look at what needs are arising and how can we support that."

All donations to the Community Christmas Card go to 15 school districts in Benton and Washington counties in Arkansas and in McDonald County, Mo., to make sure the basic needs of children are met, said Rusty Turner, editor of the Northwest Arkansas Democrat-Gazette.

"We give it to the school district directly and they choose the best way to serve children who are underprivileged and meet their needs," Turner said. "The newspaper wants to help folks reach out and spread a little holiday cheer, especially to children who don't have the resources. We want to get resources where they need to be."

The names of individuals giving $2 or more will appear in a full-page Christmas card in the Northwest Arkansas Democrat-Gazette on Dec. 25 or in the weekly papers Dec. 27 or 28.

Individuals may make tax-deductible donations to any of the daily or weekly publications in Benton and Washington counties. People wanting their names published in the card must submit a donation by noon Dec. 22.

This fall, in partnership with the Fayetteville Public Education Foundation, Gable launched her campaign for the establishment of the Gable Sloan Fund for Increased Academic Opportunity.

Once established, the fund will be distributed annually through grants for programs, such as Families in Transition, that help the most vulnerable students in the district. It will help pay for extracurricular activities and someplace to go after school and maybe get homework done, Gable said.

Cambre Horne-Brooks, executive director of the foundation said in a news release, "Gable is a remarkable young woman. A student driven campaign is first-of-its-kind for us and we couldn't be more excited. We value innovative programs that expand learning and heighten achievement, particularly for projects that impact our undeserved and low-income students and close the achievement gap."

Gable has been raising money for various causes through her bakery since she was 10 years old, selling mainly to neighbors and friends of friends. On May 17, Gable presented a $1,000 scholarship and a box of cupcakes to a Fayetteville High School senior. She's raised about $7,000 total, her mother Shanda Sloan said.

Gable said she decided to do something on a large scale to help other children in her area after a trip to Washington for winning a Prudential Spirit of Community Award, a national award recognizing youth volunteer service.

Gable, now 12, is still baking -- most weekdays and weekends when she can -- and the money she raises during the time of the campaign will go to the fund.

"With help from the community, I'm hoping we can raise the money quicker and start helping students as soon as possible," Gable said.

She has reached over 22 percent of her goal, her mother said.

Donations can be made through the foundation's website at www.fayedfoundation.org or at gablesbakery.com. 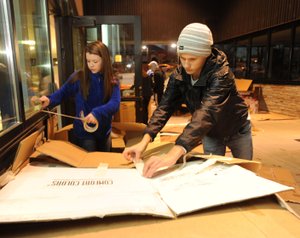 A well-known fundraiser for the Families in Transition program is the annual Homeless Vigil sponsored by Fayetteville High School's Student Council.

Students will brave the cold in cardboard boxes for the night of Dec. 7 to raise awareness and donations for the homeless community.

It's not always fun, but it goes toward a good cause, said council treasurer Ty West, who will be participating for the third year.

"My first year, I was very intimidated and thought we were all going to die. It was 29 degrees and started snowing. It's really hard to sleep and newspaper blankets aren't warm or comfortable," he said. "I believe it's an important cause because there are students in our school district that are heavily affected by poverty, and it's great to help them even if we don't know who we are helping. It helps them get necessities."

All donations are given to Families in Transition. The money will go specifically toward housing, which is the biggest barrier for families in Fayetteville, Shirley said.

"The cost of housing, even if it's just rent, is very challenging for families. Even with both parents working, it's a struggle to make ends meet," she said. "One little thing happens, dominoes start falling and it's hard to catch back up."

Anyone interested in donating can mail a check to FHS, Attn: Michelle Fyfe, FHS Student Council at 994 W MLK Blvd. Fayetteville, AR, 72701. They will also accept donations through the FHS PTSO's PayPal account.

The annual vigil will be from 5-11 p.m. at the high school between the Phase 2 and Phase 3 buildings on Bulldog Boulevard. They will accept monetary donations, as well as nonperishable items, at the event. Shirley has worked in the Fayetteville School District for about four years and said she sees a level of community connection she hasn't seen elsewhere.

"Fayetteville is an amazing, very embracing community. They're investing into these children's lives, who are the future of who we are as Fayetteville," she said. "I know that our families are very grateful."