Timber hunting for mallards puts state on the waterfowler’s map 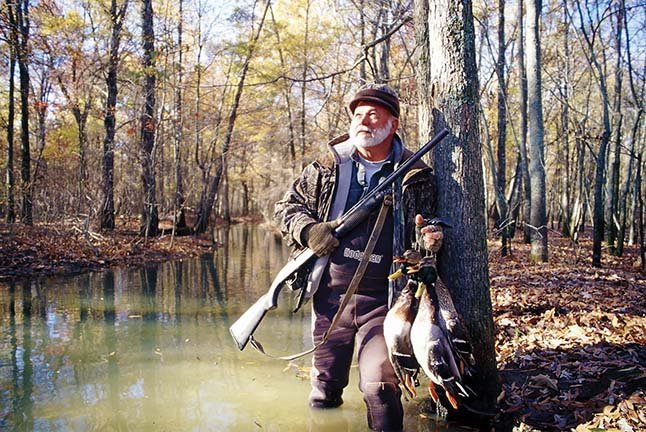 It was a hunt I’ll never forget.

My son Matt, 14 at the time, accompanied Jim Spencer and me to hunt ducks in east Arkansas’ Bayou Meto Wildlife Management Area, a picturesque bottomland near Stuttgart once described as “the epicenter of green-timber duck hunting in America.” Before sunrise, we waded to a remote opening in the flooded woodlands.

Weather conditions were ideal — blue sky with wisps of white clouds. A cold front passed the night before, and with it came a new wave of flight ducks. The sky at dawn was alive with mallards.

A flock of mallards rocketed over the treetops and banked sharply in response to a hail call. A staccato burst of feeding notes was the final persuader. The birds circled, cupped their wings and came in through the canopy. We each killed a drake.

Twenty more whirled and came our way. As Spencer called, they circled twice, then gave to the pull of gravity. When Jim shouted “Get ’em!” — some got got.

Occasionally a diver such as a redhead or scaup drops in, but most waterfowl in timber are dabblers, which don’t dive to feed. They find a perfect dinner table in the shallow woodland floodwaters.

Mallards are targeted by most who hunt bottomland hardwoods, followed distantly by wood ducks and other species such as teal, gadwalls and wigeons. Interestingly, mallard hunting in timber is largely responsible for the development of the duck call. Because they evolved in these wetland forests, mallards depend on audio cues to lead them to openings where other ducks are feeding. Hunters learned to make and use calls that imitate these cues and bring ducks close enough to shoot.

This is the essence of timber hunting. The camouflaged hunter stands beside a tree in flooded timber, blows a duck call, kicks some water and brings mallards fluttering down through the branches. Boats, dogs and decoys aren’t required. Timber shooting can be distilled to three essentials — a hunter, a call and ducks.

The call is the key. Hunters “read” the ducks and call when appropriate, using a combination of hail calls, feeding calls and quacks to bring birds in.

Shooting can be fast and furious. Hard-to-see ducks in tall timber can be on top of you before you realize they’re near. You must decide quickly if they’re within range, if they’re going to drop in or if you should take them on the pass.

You probably would kill more by pass shooting alone, but resisting pass shots holds special rewards. Few sights in hunting are as unforgettable as a flock of mallards skimming the winter-bare treetops, wings cupped in classic fashion, as they drop from the sky into a flooded forest.

While timber hunting with Jim Spencer, who now lives near Calico Rock, Matt and I learned from a master. When Spencer was 7, he and his family moved to Stuttgart, the Rice and Duck Capital of the World. Three years later, he started hunting ducks there with his father.

“Dad hunted Bayou Meto and the White River bottoms,” Spencer recalled. “It was tough hunting, poor-boy style, with no boat and lots of walking through flooded timber. I was too little for that stuff, but that didn’t keep me from wanting to go.”

Those early hunts began a lifelong love of waterfowling for Spencer, who has hunted ducks from Saskatchewan to Mexico and from Washington state to Chesapeake Bay.

“There’s better teal/pintail/gadwall/wigeon hunting in south Louisiana, and it’s going to be hard to forget hunts I’ve had on the Platte in Nebraska, on the upper Mississippi in Wisconsin and in the Lake Erie marshes,” he said. “But the best timber hunting for mallards is here in Arkansas.”

The tips Spencer shares are invaluable.

How to pick a hunting spot: “In timber, look for openings where there’s a blowdown to let ducks into the canopy, and look for open flight lanes, especially downwind, that let you track ducks as they swing and approach.”

How to call: “Let ducks be your teacher. Try something, and if they don’t respond favorably, try something else. Sometimes they’re call-shy and will flare from loud, frequent calling. Other times, you have to talk them all the way to the water.”

How to hunt public land: “Be willing to go the extra mile. Many hunters won’t go far past spots they can reach in a boat. You can find good hunting even in a crowded area if you’re willing to go to the trouble to reach the tough places.”

Bayou Meto is Spencer’s favorite public hunting spot because “even with the crowding, it’s still one of the world’s best public areas.”

When Matt and I hunted with him there, we had a pair of greenheads apiece when shooting hours ended at noon. It wasn’t the ducks we killed that made this hunt so memorable, however. We remember most what happened after the shooting ended and we unloaded our guns. At Jim’s urging, we sat on a log and watched.

“Be still and quiet,” Jim said, “and you’ll understand why timber hunting is so special.”

It started as a trickle. Mallards that flew high all morning began lighting on the water. Within minutes, the trickle became a flood. Ducks splashed down all around us. The whistling of their wings filled our ears. They covered the shallow water like a feathered blanket.

At this point, something amazing happened. With nowhere to land, the thousands of ducks still flying above us were forced to circle and look for open water. As they circled, they became a huge feathered whirlwind. We sat there, three hunters in the eye of the storm, and watched, mesmerized, as the birds swirled round and round us.

It was one of the most incredible wildlife spectacles I’ve ever witnessed, and I will always be thankful Matt was there to see it.

Moments like that, after a successful hunt, embody the true green-timber experience.