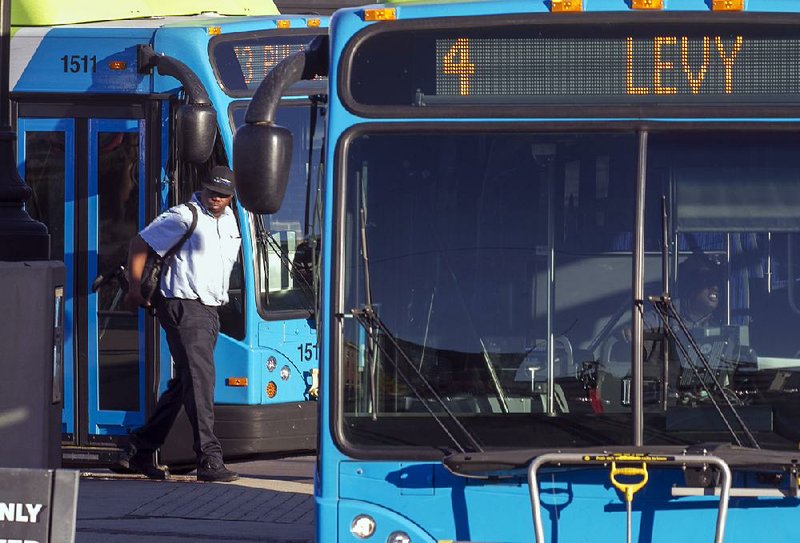 FILE — A Rock Region Metro bus driver prepares to board his bus at the River Cities Travel Center in downtown Little Rock in this Nov. 28, 2017, file photo.

The Rock Region Metro board of directors on Tuesday approved a proposed $18 million operating budget for 2018.

Next year's budget is 3 percent greater than the 2017 operating budget.

Most of the total contributions, about $10.3 million, will subsidize regular bus routes. Just under $2 million will go to Metro Links, which is a service for people with disabilities, and about $1 million will pay for the streetcars.

Most of Rock Region's operating budget goes toward labor and fuel costs.

Costs for fuel, which include gasoline, compressed natural gas and diesel, are budgeted to account for just over $900,000 next year, a slight increase from 2017.

"A 3 percent increase is very reasonable," said Wanda Crawford, the agency's acting executive director. "The cities are very happy with it."

But Little Rock is among the funding partners that have yet to approve their contribution. The city's Board of Directors will vote on the budget next month.

The total proposed operating budget of $18,094,170 represents a 3 percent increase over the 2017 budget, which covers pay increases under the bargaining agreement the transit agency has with union employees, slightly higher fuel prices and a continuing trend of falling ridership, blamed on low fuel prices.

Still, with few exceptions, she added, "it truly is a status-quo budget."