Project to remake I-30 through Little Rock's downtown will be mainly 10-lane corridor, agency says 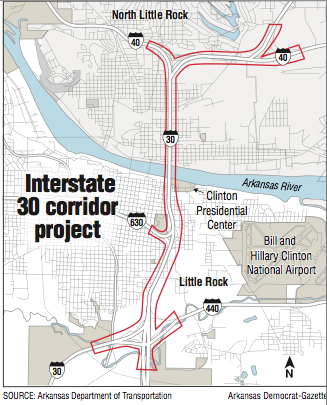 The project to remake Interstate 30 through downtown Little Rock and North Little Rock will be built as a largely 10-lane corridor rather than in a configuration using eight lanes, according to the Arkansas Department of Transportation.

The agency on Wednesday released its latest conclusions from the data amassed so far for the $631.7 million project.

Still to be determined is how traffic will get in and out of Little Rock. The department has designed two options for both the 10-lane and eight-lane ideas.

The Metroplan Board of Directors on Wednesday voted to endorse one of the designs, called a “split-diamond” interchange. The department said that choice would allow traffic several options to head into or out of downtown compared with what exists now at the Cantrell Road interchange or even an improved version of it, which is the other design under consideration.