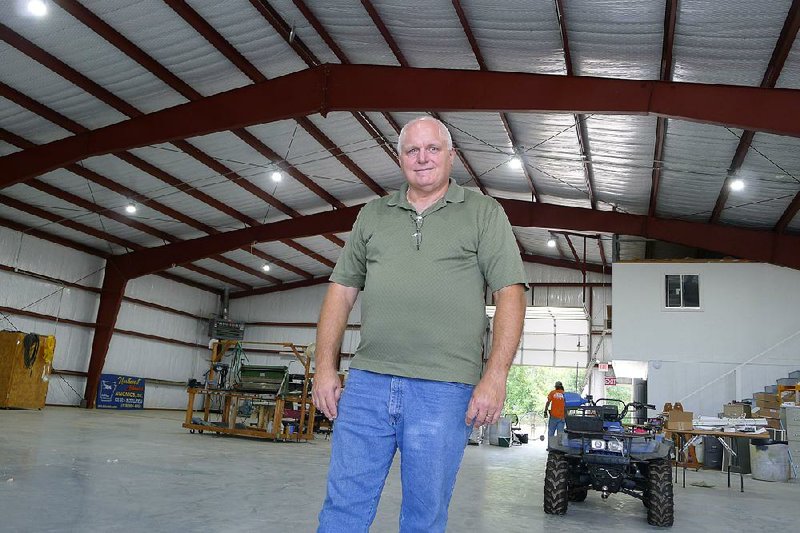 Fred Ogden, manager of Mena’s airport, stands inside the 8,000-square-foot hangar where Barry Seal supposedly had his plane modified. Ogden said conspiracy tourists used to visit the hangar and that “They would say, ‘You mean this is it?’” He said Seal’s plane was probably too big for the hangar, anyway. ( Bill Bowden)

MENA -- They're tired of Barry Seal in Mena.

People in the county seat of Polk County want to put the 1980s saga of drug- and gun-running behind them.

But that's not likely to happen since American Made hit theaters nationwide on Friday.

The movie, originally titled Mena, stars Tom Cruise as Adler Berriman "Barry" Seal, a rotund Baton Rouge native who put Mena on the map for all the wrong reasons.

Debbie Scott of Mena said it's a stretch.

"Polk County doesn't have a lot of Tom Cruises," she said.

Locals say pretty much everything the outside world hears about Mena is a stretch. The city -- and in particular Mena Intermountain Municipal Airport -- have become part of what The New York Times referred to in its movie review as the Conspiratorial Industrial Complex.

But if it brings in tourists, at least some of the locals are all for it.

"We're trying to focus a lot on tourism, and that might bring people in," said Rick Chrisman, co-owner of American Artisans eatery and gallery in downtown Mena. "We just want business mostly, however we can get it."

Les Perryman, a pilot who was eating lunch Wednesday at American Artisans, said he planned to see the movie.

"I think it's exciting for the people here," Perryman said. "I hope they mention the name Mena."

The city got its mention, but not until about 30 minutes into the movie.

From there on, however, Mena is manna for the rest of the movie.

The movie was filmed in Georgia, and it's evident the filmmakers were geographically confused. When a list of large bank deposits is plopped down on a desk in front of a federal investigator, all the banks are listed as being in "Mena, AK."

The film had nothing to do with Alaska.

In another scene, an FBI agent arrives in downtown Mena and sees a Contra rebel in camouflage walking down the street. He stops to check for change in a pay phone as somebody cruises by in a new Porsche.

Based on the movie, hundreds of Contra rebels were ferried to Mena for training but about half of them disappeared into the moonlit forests of the Ouachita Mountains.

It's difficult to know where fact ends and fiction begins regarding Seal.

In the movie, Seal is a Trans World Airlines pilot in the early 1970s who gets hired by the CIA to fly low over Central American countries taking photographs of rebels. The rebels shoot his plane full of holes.

Hard up for extra cash, Seal begins smuggling drugs back from Central America.

In real life, Seal flew tons of cocaine from the jungle airstrips of Colombia to drop zones in the Louisiana swamps, according to an article by Michael Haddigan in the Arkansas Gazette in 1988.

Seal bragged that he once made $1.5 million on a single cocaine flight.

"Basically, smuggling was so simple, so anonymous and so lucrative that it eventually became my sole occupation," Seal told the President's Commission on Organized Crime in 1985.

Those photographed rebels turned out to be the Sandinistas, who overthrew Nicaraguan President Anastasio Somoza Debayle in 1979, ending 46 years of dictatorship by the Somoza family.

Counterrevolutionaries, known as Contras, were battling the Sandinistas. And the U.S. was covertly backing the Contras.

In 1981, Seal began hanging out at the Mena airport and soon had a fleet of planes based there.

In the movie, at the behest of the CIA, Seal flies to Central America to deliver guns to the Contras, but they're more interested in wrestling him to the ground to steal his sunglasses and boots. Later, in the movie anyway, Seal delivers Contras to Mena for training in the woods.

According to the Gazette article, Seal struck a deal with the federal Drug Enforcement Administration to work as an undercover informant after he was indicted in Fort Lauderdale, Fla., in 1984 for smuggling Quaaludes and laundering money.

This was, at least according to the movie, after he was already working for the CIA and the Medellin drug cartel from Colombia.

The CIA installed a hidden camera in Seal's plane to get photographic proof of Sandinista drug trafficking, according to the movie and newspaper articles from the 1980s.

In June 1984, Seal flew to Nicaragua and returned to the U.S. with 1,472 pounds of cocaine, according to an article in The New York Times. He also had film of a man whom American officials said was an employee of the Nicaraguan Interior Ministry helping load cocaine into the plane.

The Washington Times broke the story of Seal's flight and the photographs. The article exposed Seal to the drug cartel as an undercover agent and an informant, wrote Haddigan.

On Feb. 19, 1986, as he sat in his white Cadillac in the parking lot of a Salvation Army halfway house in Baton Rouge, Seal was assassinated by machine-gun wielding Colombian hit men.

Allegations later surfaced that many gun shipments that went to Nicaragua as part of the Iran-Contra affair were sent from the Mena airport, according to The Encyclopedia of Arkansas History & Culture.

"In essence, not only was the airport used to smuggle illegal drugs into the United States, but it was also a departure point for weapons used to arm the contras in Nicaragua," according to the article.

Many people in Mena contend that the drugs never got there. They were jettisoned over the Louisiana swamps -- wrapped in plastic and life preservers -- before Seal's planes made it back to Mena.

According to the Senate Foreign Relations Committee, all charges and cases dealing with Seal and others with connections to the Mena airport were dropped because of potential national security risks.

"In other words, the charges of drug smuggling and money laundering were not enough to warrant the release of information about the use of the airport in the Iran-contra affair," according to the Arkansas encyclopedia.

Things are relatively quiet at the Mena airport now.

On Wednesday, two vultures flew in a circle over the hangar where Seal supposedly had his airplane, The Fat Lady, retrofitted to run guns to Nicaragua.

Conspiracy tourists used to go to the airport to see the hangar, which looks pretty much like any other hangar, said Fred Ogden, the airport manager.

Ogden said the 8,000-square-foot hangar looks too small to house The Fat Lady, which was a Fairchild C123, so the work was probably done outside the hangar.

Ogden said an airplane broker was based at the Mena airport in the 1960s and '70s, so people in the area learned to work on planes and make a living there. The airport continues to have that reputation. Ogden said there are 18 companies at the airport, including six that paint airplanes, three that repair air frames and one that does engine work.

"People around here are phenomenally talented with repairs and maintenance on airplanes," said Danny Thrailkill, the district judge in Mena. "It's just an industry that grew up here."

Thrailkill was a young lawyer when the Seal case broke.

"We tried so hard to get that behind us," said Thrailkill, who was city attorney for 24 years. "Then the Internet came along. Mena doesn't want to be known for that."

Thrailkill said he would probably see the film, although he didn't expect Mena to be portrayed in a favorable light.

A.L. Hadaway, who was Polk County sheriff in the 1980s, said he's tired of talking about Seal and conspiracy.

"I've been fooling with this since 1983 and I'm sick of it," he said. "I've dealt with it way longer than I ever expected to. It's still going on. This movie as best as I can tell is going to make him out to be some kind of a hero based on the fact they got a movie star to play his part."

Hadaway said he heard from the movie people but he didn't help them.

"They kept calling me wanting me to participate and give them information," he said. "I finally convinced them if they took my name out of their Rolodex and quit calling me, we'd both have a happier life."

Hadaway said he doesn't plan to see the movie, "not on purpose" anyway.

About 70 people showed up Friday at the Silver Screen Theater in Mena for the 6 p.m. showing of American Made.

Skyler Beck, an employee of the theater, said she had expected more, based on the city's starring role in the film. The theater can seat 190. But the crowds may show up later, she said.

And the tourists, too. 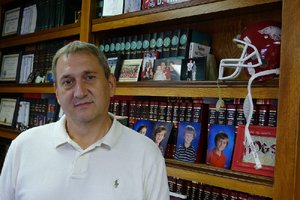 Photo by Bill Bowden
Danny Thrailkill, a district judge and former Mena city attorney who was a young lawyer when the Barry Seal case first made headlines, said he’ll probably see the movie but doubts his town will be treated favorably. 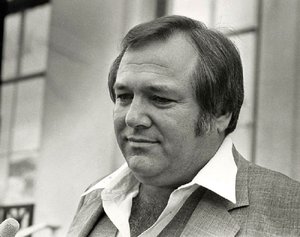 Photo by Courtesy of The Advocate, Baton Rouge
Discerning fact from fiction about Barry Seal, who was killed Feb. 19, 1986, in Baton Rouge by machine gun-wielding Colombian hit men, is a difficult endeavor. Seal’s story is the focus of the new movie American Made. 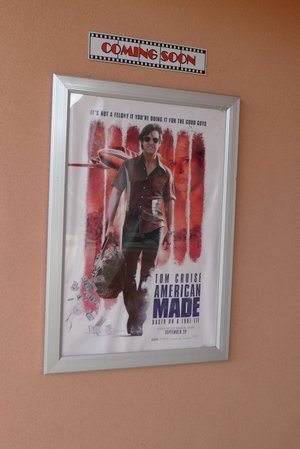 Photo by Bill Bowden
A poster advertising American Made outside the Silver Screen Theater in Mena on Wednesday. 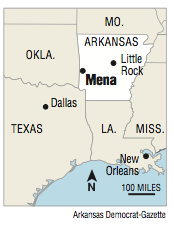 A map showing the location of Mena.