Days-old firm won state grant; it listed focus as economics, health, no expertise in either

On Sept. 10, 2013, Arkansas Health and Economic Research Inc. registered -- as most new businesses are required to do -- with the Arkansas secretary of state's office.

The startup's chances of getting state money might have seemed slim.

The executive director wasn't a scientist, but an insurance agent who now works as a Saline County juvenile intake officer.

And the grant application offered no evidence that anyone connected with the firm was an expert in economics or health.

Yet 15 days after incorporation, Arkansas Health and Economic Research received word that it had won a General Improvement Fund grant from the state, backed by a single lawmaker, for $20,000.

And that was just the first grant.

Between 2013 and 2015, records show the nonprofit received a total of five General Improvement Fund checks, OK'd by four legislators, for $41,698 in taxpayer money.

It's difficult today to find anyone to talk about why those grants should have been awarded or what good came from them.

"I can tell you nobody at the board level asked any questions," says Berryville Mayor Tim McKinney, a 27-year member of the Northwest Arkansas Economic Development District board, which administered the grants.

McKinney describes the district, headquartered in Harrison, as providing mostly a rubber stamp.

"We were given a list of projects, and we were told to 'vote yes here, vote yes here. Good job guys, let's eat.' It was clear the Legislature still controlled that money," McKinney said.

After learning more about the grants to Arkansas Health and Economic Research, McKinney says: "It sounds very shaky to me."

Individual Arkansas legislators have approved more than 4,200 General Improvement Fund grants through eight state economic planning and development districts since 2013, according to the Arkansas Democrat-Gazette's study of records obtained through the state Freedom of Information Act. Total awards topped $50 million.

Recipients and lawmakers often talked about the benefits to homeless shelters, volunteer fire departments, other aid groups and local governments.

A federal criminal investigation, revealed in January, changed the tenor of that talk.

Arkansas' General Improvement Fund grants also are the target of a lawsuit now before the Arkansas Supreme Court, filed by Jacksonville lawyer and former legislator Mike Wilson. The suit asks that the awards be declared unconstitutional.

And a Little Rock lawyer and public interest advocate, Scott Trotter, is promoting a constitutional amendment to ban the grants.

Critics, including Wilson and Trotter, say the grants often went to legislators' friends or political supporters. The money also went to religious organizations in violation of separation of church and state requirements, they say. And they believe allowing legislators, rather than the executive branch, to spend state money violates the Arkansas Constitution.

No one has been accused of any criminal wrongdoing in connection with the grants to Arkansas Health and Economic Research Inc.

Still, the nonprofit attracted public attention after the federal investigation was revealed in January.

The two former legislators facing charges -- Woods and Neal -- authorized the largest grants to Arkansas Health, records show. And Shelton, the college consultant named in the federal indictment, is listed as one of the nonprofit's officers.

To understand how legislators' grants to Arkansas Health came about and how those state funds were spent, the Democrat-Gazette collected available public records and sought interviews with lawmakers, administrators, state agency board members, the company's officers and others.

Of those who talked about the grants, most expressed concerns or regrets.

"That was not the best place to put that money," said state Sen. Bart Hester, R-Cave Springs, who sponsored a $5,000 grant to Arkansas Health and Economic Research in 2014. "That was all on me for not doing the research I should have."

The newspaper also has found no records that show how any of the grant money was spent.

Little Rock lawyer David Couch remembers a friend of then-Sen. Jon Woods asking for help in 2013 to incorporate "a couple of nonprofits."

In 2013, he was working with Woods and others on a constitutional amendment to extend lawmakers' term limits and rewrite their ethics rules. Couch says he agreed to help Woods' friend, Randell Shelton, with online incorporation forms.

One was for Arkansas Health and Economic Research. Its executive director was listed as Charles Snider.

"I think I've met Randell [Shelton] twice," Couch said in an interview. "I have no clue who is Charles Snider... ."

"I had no idea what the company was going to do," he said.

Shelton and Woods declined through their attorneys to be interviewed.

Snider, who has not been accused of any crime, also declined to answer questions.

"Mr. Snider has fully cooperated with requests by authorities for information," said his attorney, Jeff Rosenzweig of Little Rock. "He has done nothing wrong."

But because an officer connected to the Benton nonprofit -- Shelton -- faces federal indictment, "we don't feel we can say anything more," Rosenzweig said.

The money also would help "bring about employment opportunities," and "potentially reduce overall healthcare costs for consumers and the State of Arkansas," Snider wrote.

Where the grant application asked for the name of a supportive state lawmaker, Snider listed Jon Woods.

Most of the information about Arkansas Health grants is available only through records.

Speaking briefly to the newspaper, Norton said of the GIF grant program: "We were trying to administer those grants as the legislators requested we do."

Bill Witty of Harrison, the board's secretary and a 20-year member, said the district's board typically got a list of recommended General Improvement Fund grants at its meetings. Members usually didn't review them individually.

Board members thought they were getting enough information, he said, and assumed grants "passed the smell test."

Many of the awards probably didn't need detailed information because board members knew the recipients, Witty said. "But in hindsight, there wasn't always enough information for us to make the kind of value decision we were being asked to make," he said.

Witty doesn't remember the grants to Arkansas Health and Economic Research. He's concerned by them now that he knows the money went to a new company outside Northwest Arkansas.

The legislator who approved it was Micah Neal, now awaiting sentencing after pleading guilty to honest services fraud.

Neal also directed another grant to Arkansas Health and Economic Research a year later, in 2014, according to the economic development district's records. That one was for $4,198.

Hester remembers the $5,000 grant he sponsored to Arkansas Health in March 2014.

"I relied a lot on a close colleague of mine and a friend of mine, who encouraged me and said it was a very good organization," Hester said.

At the time of his grant, Hester believed the Benton nonprofit was studying "umbilical cord storage and helping a lot of parents with sick babies."

After the 2013 Legislative session, Hester said, he "was not comfortable with how the [General Improvement Fund grant] program was implemented, and I did not participate in 2015.

"Since then I have been working to end the program."

Della Rosa expressed surprise that records show she sponsored a $2,500 grant to Arkansas Health in November 2015.

"I didn't remember giving any grant to that organization," Della Rosa said in an interview. "I thought I gave $2,500 to Ecclesia College, but I don't remember this one."

"Put yourself in our shoes," she said about lawmakers fielding dozens of appeals from groups seeking grant money. "You have 50 people calling you. You're trying to decide, 'Do I give an equal amount to everybody that asks? What would be best for my district?'

"All these organizations are doing good stuff. It's not like the KKK of Arkansas, where you really shouldn't have given money."

Why didn't anyone question the grants to Arkansas Health and Economic Research?

Joe Willis, the current executive director of the Northwest Arkansas Economic Development District that administered the awards, was in his job for only two of the Arkansas Health grants, for $4,198 in late 2014 and $2,500 in late 2015.

The Benton nonprofit "appeared to be something we had granted money to before. And no larger than the amounts were, there was no reason to set off alarm bells that it was anything but proper," Willis said.

Grant records for Arkansas Health, Ecclesia College and Decision Point reviewed by the Democrat-Gazette show most of the state's eight economic development agencies ask grant winners for receipts or other records to show how the money was spent. The Northwest Arkansas agency did not.

Arkansas Health's Snider was asked only to sign a form promising that all the grant funds "were spent strictly in accordance with the submitted and approved proposed project." Any unspent money was to be repaid, the grant closeout form said.

Willis and executives with other district economic development offices say they received little funding to administer the grants.

"There's been a great deal of effort to put structure and accountability into the system. Hindsight is at work here, but we're doing all this with limited staff, without an audit staff, without a GIF department," Willis said.

Wilson, the former Jacksonville legislator who is asking the state Supreme Court to outlaw the grants, says he believes legislators designed the system to have little scrutiny or accountability.

After learning more about the grants to Arkansas Health and Economic Research, he's critical of economic development districts for "lack of inquiry."

But their "failure to perform," Wilson says, "is the reason they were chosen to be the money launderers."

On Feb. 22 this year, after the federal General Improvement Fund grant investigation became public, the Northwest Arkansas Economic Development District sent its last closeout form to Arkansas Health. It inquired about "the status of the $2,500 GIF grant" from Della Rosa.

"Although all of the grant funds have not been spent," his letter said, "it has been decided that any further expenditures of this money are inappropriate."

This spring, Arkansas legislators decided not to award General Improvement Fund grants for 2017. Depending on how the Arkansas Supreme Court rules in Wilson's lawsuit, they could choose to resume them.

As for Arkansas Health and Economic Research Inc., it seems to have disappeared.

There's no sign that the nonprofit still operates at its registered address, a strip office building along Interstate 30 in Benton.

Internet searches find no website or evidence of studies, health advances, cost savings or anything else promised in the grant applications.

"The grants to Arkansas Health underscore that GIF funding directed by individual legislators must be prohibited by amending the state constitution," said public interest advocate Trotter. "Our tax dollars should never be spent so recklessly and with no regard for merit, objective evaluation and accountability."

When he heard about the federal investigation and Neal's guilty plea, McKinney said he "wasn't really shocked. There was too much money floating around and too little accountability." 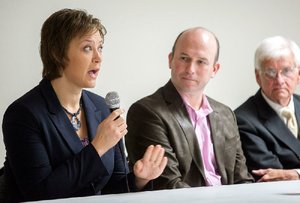 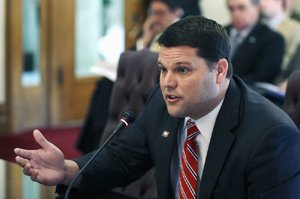 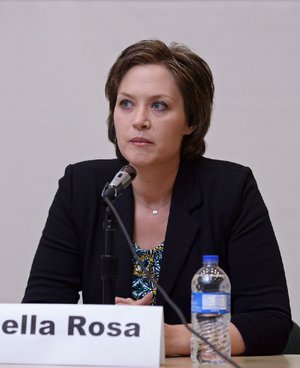 Dec. 14 — Arkansas Supreme Court rules that a legislator’s $400,000 appropriation to the town of Bigelow for street and sewer improvements is unconstitutional local legislation. That opinion, in a lawsuit by former state Rep. Mike Wilson of Jacksonville, and subsequent rulings stop lawmakers from directly awarding grants from the state surplus General Improvement Fund (GIF).

July — Legislators start channeling portions of their individual shares of GIF money through eight economic development offices, also called planning and development districts. Grant awards that require district board approval are viewed by some legislators as not coming directly from them. That year, the districts get $3.09 million total to distribute.

Jan. 4— Neal, no longer a legislator, pleads guilty to one count of fraud in connection with GIF grants to two nonprofits identified in grant records as Ecclesia College of Springdale and Decision Point Inc., an addiction treatment center in Bentonville, and related entities. His plea agreement implicates a state senator and others. Federal authorities allege a kickback scheme.

June 16 — A vote by the Arkansas Bar Association narrowly fails to back a constitutional amendment that would have, among other things, prohibited legislators from spending GIF money for what critics call “pet projects.” Little Rock lawyer Scott Trotter, who helped draft the amendment, continues efforts to put it before Arkansas voters.