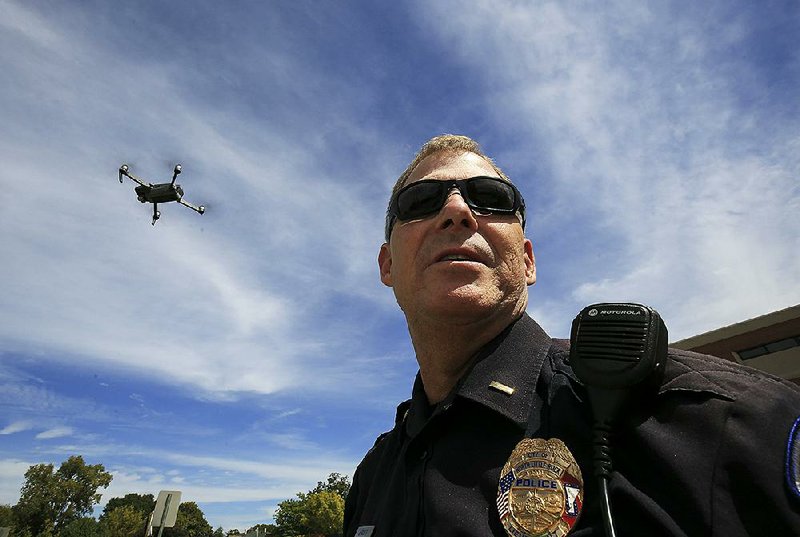 The device chirped and whirred. Red lights glowed under its arms. Its camera moved in each direction, calibrating itself as part of the drone's startup process.

Scott soon had the drone hovering in midair, steering it with a controller he'd attached to his smartphone.

North Little Rock police recently purchased five drones -- from a specialty shop in the area, not from a galaxy far, far away -- and plan to have them buzzing through the air by the end of October for search and rescue missions, visual reconnaissance, disaster response and other situations beyond routine police calls.

The department is among a rapidly-increasing number of U.S. law enforcement and emergency response agencies that have purchased drones in recent years. At least 167 such agencies bought drones in 2016, more than double the number that purchased the aerial devices in the previous seven years combined, according to the Center for the Study of the Drone at Bard College in New York.

Agencies in possession of drones range from the extensive Los Angeles Police Department to the 12-person town of Linn's Police Department in Wisconsin, which reportedly used a drone with an infrared camera to find a missing ice fisher's body this year.

The North Little Rock department purchased its five drones, also known as quad-copters, using $19,127 seized in criminal cases, according to department records released under the Arkansas Freedom of Information Act.

That figure includes the cost of peripheral equipment and testing for six officers to obtain remote pilot licenses, as required by the Federal Aviation Administration.

It's the North Little Rock Police Department's second attempt at using drones. The agency spent $78,000 in federal grant money on a mini-helicopter in 2007. The remote-controlled chopper was gasoline-powered, more than 5 feet long and weighed about 25 pounds.

It took four people to operate the helicopter. The department ultimately decided that flying it wasn't practical.

"The technology just wasn't there yet," Scott said. "And it was very expensive."

At a cost of $1,299 apiece, the department's four DJI Mavic Pro drones each cost a fraction of the mini-helicopter's price. The new drones are battery-powered, weigh less than 2 pounds and fold into a travel bag. They have 12-megapixel cameras that transmit 4K-resolution video and are equipped with sensors to prevent collisions.

The department also purchased one DJI Matrice 210 drone for $8,999. It's equipped with an infrared camera and is built to fly longer and under more harsh conditions than the smaller quad-copters.

Scott compared the evolution of drones to cellphones. Once bulky and expensive, they've become compact and affordable over the years. And their use has become widespread.

The North Little Rock Police Department isn't the only agency that plans to deploy drones in the coming months.

That brings the number of public agencies in the state that have purchased drones to at least 10.

Pulaski County sheriff's Capt. Mark Swagerty said he and three deputies will soon be licensed to pilot a DJI Mavic Pro, the same model purchased by North Little Rock police. Swagerty said the sheriff's office is already looking into buying a second drone and positioning the devices on opposite sides of the Arkansas River.

"It's a lot cheaper to get a drone up in the air than it is to get a helicopter and fly over," Swagerty said.

Benton County sheriff's Maj. Robert Bersi said his agency purchased a drone with an infrared camera in September and plans to coordinate its deployment with the neighboring Rogers Police Department. Rogers police began using a quad-copter in late 2016.

Bersi said the sheriff's office began researching drones after flooding damaged roads and bridges across Benton County in the spring.

"You can put a drone up and quickly determine bridges that are out and dangerous water on roadways without actually having to send someone down there," he said.

"We've had issues with swampy areas on Trammel Road where it's difficult to get a canine in there," he said.

As drone use has increased in recent years, so has scrutiny over how the devices are used.

The Seattle Police Department canceled a drone program in 2013 after residents raised privacy concerns. The two drones it purchased were never deployed. It returned the devices to the manufacturer.

The American Civil Liberties Union has warned that drone use has greatly outpaced oversight of the devices. The group says on its website that "drones equipped with facial recognition software, infrared technology, and speakers capable of monitoring personal conversations would cause unprecedented invasions of our privacy rights."

The FAA had logged more than 3,300 hobbyist drone registrations across Arkansas as of May 2016.

Arkansas is among roughly 40 states that have laws governing drone use, according to the National Conference of State Legislatures. Act 1019, enacted in 2015, bans anyone from using a drone for surveillance of "critical infrastructure," such as power plants and oil refineries. Act 293, enacted the same year, prohibits the use of drones for video voyeurism.

The federal government enforces altitude, distance and speed restrictions on private and public drone users, but its courts have not ruled on whether police drone surveillance violates the Fourth Amendment protection against "unreasonable searches and seizures."

Only a few states have laws that require police to obtain a warrant or court order to conduct aerial surveillance.

Arkansas is not one of them.

Each of the four law enforcement agencies planning to deploy drones in the coming months said they have drafted policies to address privacy issues and prevent drones from being misused.

"It is a valid concern," Scott said. "That's one of the things we want to get out on top of before we go operational. Because we want to answer those questions. We don't want this to be a surprise. We want people to understand exactly what our goals are with utilizing drones in the field.

"You're not going to have to worry about looking out your window, eating breakfast and there's going to be a drone sitting there looking in your house." 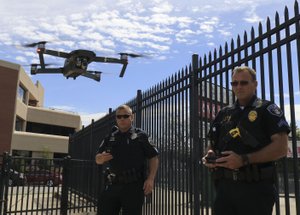 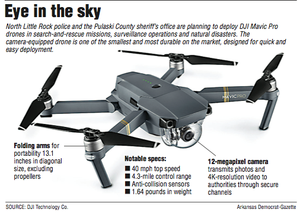 Image and information about drones 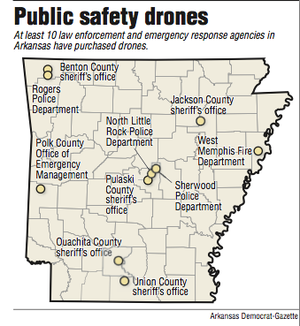 A map showing the location of public safety drones.