Task force on state's taxes gets down to it; 16 members voice ideas, fears 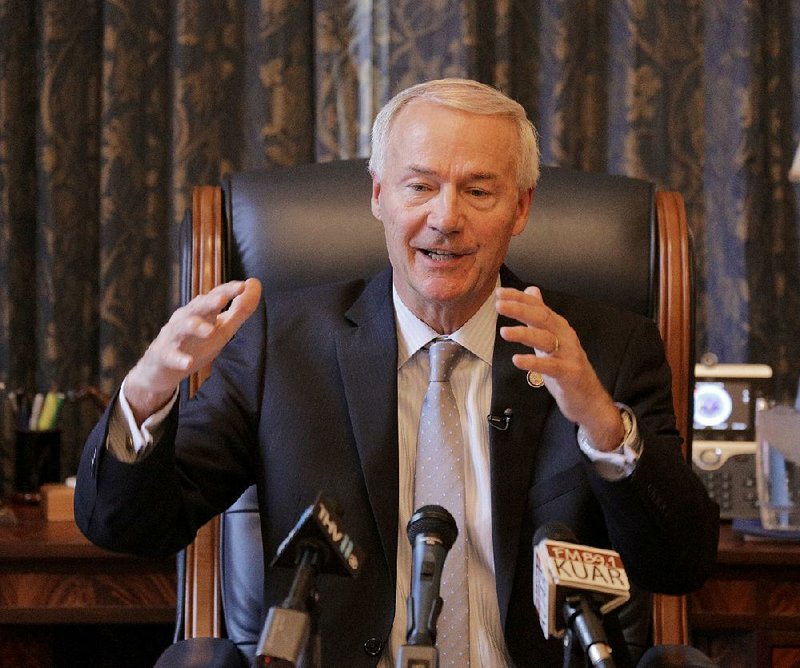 Members of the Arkansas Legislature's tax overhaul task force have a wide variety of aims, ranging from wanting to have a broad overhaul of sales and income taxes to simplifying the tax code.

And one of the task force's leaders, Sen. Jim Hendren, R-Sulphur Springs, said $100 million a year should be the starting point for the panel's discussions about future income tax cuts.

Rep. Jim Dotson, R-Bentonville, who is on the panel, said he wants to try to cut income tax rates further, charge sales tax on more goods and services, and then cut the sales tax rate.

But Sen. Joyce Elliott, D-Little Rock, said she worries that the Legislature lacks the political will to broaden the sales tax base to help pay for tax cuts. She also expressed concern that the revenue loss from tax cuts wouldn't leave enough money to adequately fund critical state services.

Dotson and Elliott voiced their views during last week's meeting of the 16-member Tax Reform and Relief Legislative Task Force.

The tax overhaul force was created under Acts 78 and 79 during this year's regular legislative session partly to placate some lawmakers who favor more income tax cuts, particularly for Arkansans who earn more than $75,000 a year, where the top tax bracket starts. The top bracket's highest rate is 6.9 percent, said Scott Hardin, a spokesman for the state Department of Finance and Administration.

Arkansas' major sources for state tax revenue include taxes on sales, individual and corporate income, and motor vehicle fuel. According to Whitney McLaughlin, a tax analyst for the state Department of Finance and Administration, in fiscal 2017, which ended June 30, the state:

• netted $2.7 billion in individual income taxes, based on collections of $3.2 billion and refunds of $446 million.

• netted $397 million in corporate income taxes, based on collections of $464 million and refunds of $67 million.

Republican Gov. Asa Hutchinson said it hasn't been determined when he will appear before the task force to outline his views.

"The task force has just now engaged a tax consultant, and it is still early in the process," Hutchinson said in a written statement.

The Legislature has hired Philadelphia-based PFM Group Consulting under a contract for up to $312,750 through Dec. 31, 2018, with an option to renew the contract for six more months. PFM Director Randall Bauer is the firm's point person in Arkansas, and he served as Iowa's state budget director from 1998-2005 under then-Democratic Gov. Tim Vilsack.

"It is important for the task force to receive the study report from the research firm and to hear from a broad spectrum of viewpoints before final conclusions are reached," Hutchinson said. "My priority to reduce the income tax rates in Arkansas are well known by the Legislature."

Under the laws that created the task force, the Republican-controlled Legislature approved Hutchinson's plan to cut individual income tax rates for Arkansans who earn less than $21,000 in taxable income. This plan is projected to reduce general revenue by about $25 million in fiscal 2019 because it takes effect on Jan. 1, 2019, and then $50 million each year thereafter. The top rate in the lowest tax bracket is 4.4 percent; the lowest is 0.9 percent.

Another cut, approved in 2015, reduced the rates for those in the bracket for taxable incomes between $21,000 and $75,000 a year. That tax cut was projected to reduce general revenue by about $100 million a year starting in fiscal 2017. The top rate in this middle tax bracket is 6 percent. The lowest rate in the middle and top brackets is 0.9 percent.

Asked if he has a particular numerical goal for individual income tax cuts, Hutchinson replied, "Again, it is too early in our current budget to know the level of tax cuts in the future.

"I will monitor and make my views known prior to the next general session of the Legislature [in 2019]," he said.

Hutchinson has repeatedly said he ultimately would like to see the state's top income tax rate be 5 percent, but it could take a while to do.

Asked how much that would cost in revenue, Hardin, the spokesman for the Department of Finance and Administration, said that reducing the top rate in the two highest brackets to 5 percent would have a $346 million impact. That drop would be in addition to the $100 million cut enacted in 2015, he said.

Hendren, a task force co-chairman, said in an interview that he would consider $100 million to be "a starting point" for discussions about future income tax cuts. He noted that the Legislature has enacted income tax cuts of $50 million and $100 million a year in the past two regular sessions.

Hendren, whose uncle is the governor, said he sees the task force's job as to provide the best way to grant tax relief that "provides the best bang for the buck."

He steered away from stating a particular goal for income tax cuts, adding, "Even if we make the tax code simpler for people, it would be a plus."

Jett, who also chairs the House Revenue and Taxation Committee, said, "If we come in here and Congress passes the repeal and replacement of the Affordable Care Act, that changes our budget significantly in the state.

"The best course of action may be to do nothing until the smoke clears on the Affordable Care Act," he said.

Under the state's version of Medicaid expansion authorized under a waiver to the Patient Protection and Affordable Care Act, the state is providing private health insurance to roughly 300,000 low-income Arkansans. This state is paying 5 percent of the cost of the program this year with the federal government picking up the rest. The state's share is supposed to gradually increase to 10 percent by 2020 under current federal law.

Dotson said during last week's task force meeting that "as far as an overarching goal, in my mind, obviously we are not going to eliminate all the income taxes or all the consumption taxes.

"But the best we can do is to try to get toward that and in my opinion getting those rates for both the income tax and the consumption tax to be as low as possible and as competitive as possible, whether that's broadening the base for consumption taxes, eliminating exemptions and things along that line, and then lowering the income taxes to make us the most competitive not only in our region, but in a global economy," Dotson said.

"Those are the two goals that I would try to push forward and work through in a 10,000-foot view," Dotson said.

But Elliott said she worries that the state won't have enough revenue to provide critical state services, if it reduces tax rates without broadening the sales tax base.

She said she hopes Bauer, of the consulting firm, spells out potential problems with broadening the sale tax base and that he advises the Legislature about its options if that doesn't happen.

Many states have explored expanding their sales tax base, "but very few states have been able to do it in a broad fashion," he said.

Elliott said in an interview after the task force meeting, "we all would like to broaden the base and be able to cut taxes, and I want to be sure those are synced up.

"I don't want to be the state of Kansas. They couldn't deliver the common governmental services" after enacting large income tax cuts, she said.

Hendren said the task force will take an in-depth look at sales and excise taxes during its next meeting Nov. 7-8.

He said he wants the task force to compare the state's sales tax with that in other states, plus exemptions, and their value.

"We are going to take a deep dive into our sales tax," he said. "We have a relatively high sales tax burden, compared to the nation and surrounding states, so how do we fix that? What are the options available to us, and do we need to get rid of some exemptions? Do we need to broaden the base? Do we need to look at taxing some services? How do we reform the sales tax?"

The Department of Finance and Administration's most recent estimates of the cost of sales and use tax exemptions date to fiscal 2011, when the rate was 6 percent. (The rate rose to 6.5 percent when voters later approved a half-cent sales tax for highway improvements.)

• The sale and purchase of prescription drugs by health care providers and oxygen prescribed by doctors, for a lost revenue of $142.5 million.

• Sales of feed used in the commercial production of livestock or poultry, for a lost revenue of $98 million.

• Sales or rentals of ad space in newspapers and publications, for a lost revenue of $12.7 million.

• Reducing to 2 percent the tax on the sale on food and food ingredients reduced revenue by $176 million. That tax is now 1.5 percent, and the rate is expected to decline to 0.125 percent on Jan. 1, 2019. The rate reduction is in a 2013 law under which the state uses savings from no longer paying about $60 million a year in desegregation payments to Pulaski County school districts.

Hendren said that for the Nov. 7-8 meeting, he has also asked Bauer to develop estimates of how much revenue the state loses from Internet sales.

State officials have repeatedly said they don't know how much revenue the state is losing from online sales, although others have estimated the loss at $100 million a year. They also say they're barred under law from disclosing how much a taxpayer, such as Amazon, has paid in sales taxes since it announced it would begin to do so earlier this year.

"I want a firm answer on the Internet sales tax," Hendren said in an interview. "How much can we really expect, and it's not because I want to see that much more revenue. It's because I want to know that's money we have to [provide] tax relief somewhere else, so we got to know what the amount is, so we don't get ourselves in a bind."

During this year's regular session, Senate-approved legislation aimed at persuading out-of-state companies without a physical presence in Arkansas to collect taxes on their sales to Arkansans and remit the taxes to the state failed to clear the House by eight votes in a 43-50 vote. 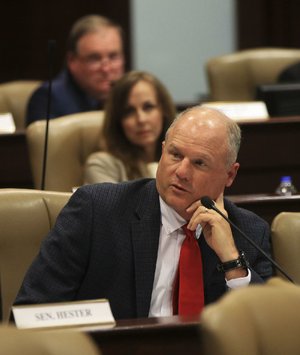 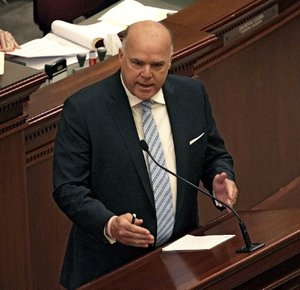 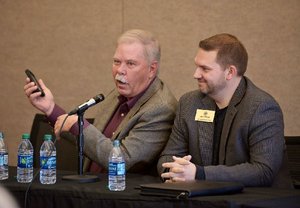 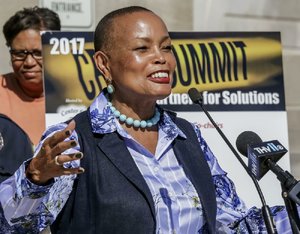 Print Headline: Task force on state's taxes gets down to it; Its 16 members voice ideas, fears