Little Rock man accused of hitting cyclist with vehicle, threatening him with machete 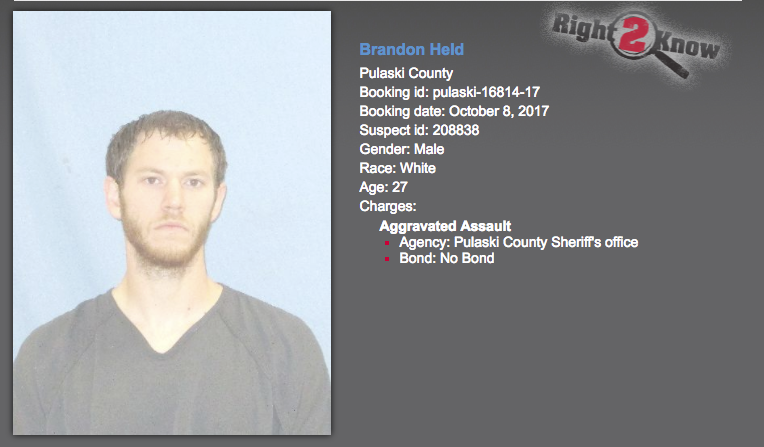 A Little Rock man has been charged with aggravated assault after being accused of hitting a cyclist with his vehicle, authorities said.

Officers arrested Brandon Jeremy Held, 27, near the intersection of Zeuber and Fletcher roads, in southeastern Pulaski County, about 3:30 p.m. Sunday, according to the sheriff's office.

Officers spoke with a man who said he was riding his bicycle along Zeuber Road when he was attacked by two dogs, a report said. The cyclist told police he placed his bicycle between himself and the dogs to keep from being bitten. The dogs' owner, a 33-year-old woman, reportedly approached and told the cyclist that "my dogs are not going to bite your punk a**."

The cyclist told police that he sprayed the dogs with his water bottle and continued to ride east on Zeuber Road when he heard a vehicle approaching quickly from behind. The vehicle struck him from the rear, knocking him off his bike. The victim said a man, later identified as Held, stepped out of the vehicle with a machete and threatened to kill him, prompting him to run into the woods and call authorities.

The cyclist reportedly had minor injuries but refused medical treatment at the scene. Damage to his bicycle was estimated at $6,000.

Held was in custody at the Pulaski County jail as of Tuesday afternoon in lieu of $35,000 bond, records show.