LR hospital's new lab to give kids, the pregnant workouts 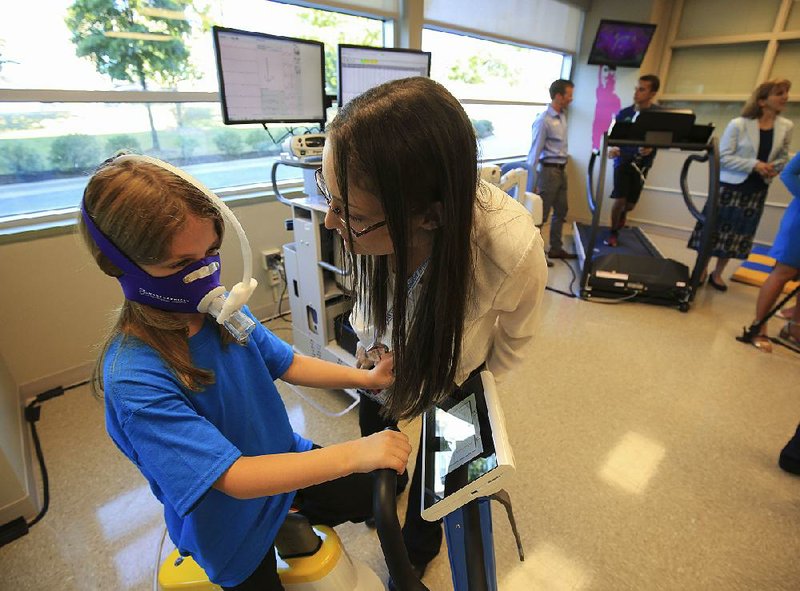 Eva Diaz checks on Alice McMains, 6, as she rides a stationary bike Tuesday at the Laboratory for Active Kids and Families at Arkansas Children’s Hospital in Little Rock.

A new laboratory at Arkansas Children's Hospital will test and study children and pregnant women as they use fitness machines, in an effort to better understand children's health and improve it.

The Laboratory for Active Kids and Families is one of only two pediatric exercise laboratories in the nation, with the other at the University of California, Irvine.

Children will be measured on balance, ability to produce energy, strength, endurance and other things as they use fitness machines in the laboratory. Blood, urine and saliva testing also will be done to measure cells and chemistry, and children will fill out questionnaires about lifestyle, culture, family, household economics and food intake, according to Matthew Cotter, a research assistant at the Arkansas Children's Nutrition Center.

The laboratory will be at the center, which is on the hospital's campus.

A big part of a child's health comes from cultural and familial factors, said Sean Adams, director of the the nutrition center and a professor of pediatrics at the University of Arkansas for Medical Sciences.

"But there are also very likely some physiological factors, as well," he said.

With that information, researchers believe they will be able to see the differences in the chemistry of a more in-shape child vs. the chemistry of an out-of-shape child, said Greg Kearns, president of the Arkansas Children's Research Institute and senior vice president and chief research officer for Arkansas Children's Hospital. The institute, which is adjacent to the nutrition center, is owned by the hospital and is also affiliated with UAMS.

"We want to understand it at the very basic [level]," he said.

"This will make a difference in the quality of life," Hutchinson said.

Children's Hospital President and CEO Marcy Doderer focused on another benefit of the research lab: improving children's health in Arkansas.

Those low rankings are "somewhat embarrassing" for the state, Doderer said.

"But it's work like this that is going to [improve it]," she said.

Research can help guide people toward healthier habits, Hutchinson said. The governor recalled being raised on a diet of starchy foods provided by his parents, who lived through the Great Depression and survived on cheaper, less nutritious foods. They didn't know better, he said, but now people know how to eat better.

Griffin said projects like the lab should be a priority for dwindling federal dollars.

"We need more research," he said.

The children's exercise lab was created with regular annual appropriations for funding the Arkansas Children's Nutrition Center from the U.S. Department of Agriculture, according to a news release. The most recent appropriation was $7.3 million.

Inside the lab, children exercise on a treadmill, a leg-lift machine, a bike with a machine that helps measure breathing and an electronic board that connects with interactive video games to measure a child's balance while skiing or snowboarding virtually.

Nathan Nolen, 11, lifted the heaviest weights he could with each leg to test his strength, then the lightest weight that he could do repeatedly and quickly to test his endurance.

He's stronger on his right side, he said. He's right-handed.

Tuesday was Nathan's first time at the lab. He said he's learned that he's strong -- "I guess," he said -- and he thinks it's cool to be a part of a bigger study.

Children's Hospital is trying to recruit children through social media, doctor's offices and fliers posted anywhere children might be, said Elisabet Borsheim, an associate professor of pediatrics at UAMS and a faculty member at the nutrition center.

Borsheim said she wants to test 200 children in the lab in the next couple of years.

Researchers want to look at a wide population and examine the variables, Adams said.

Pregnant women are already participating in a study, he said. Researchers are observing obese pregnant women on an exercise regimen to see what impact exercise can have on the health of their babies.

Researchers already know that children of obese mothers can be inclined to be obese, Adams said, but researchers want to see whether exercising during pregnancy will change that. Later on, they'll probably do another study on exercise and changes in nutrition during pregnancy, he said.

Obesity rates are higher in Arkansas, Adams said. The work the new lab is doing will help combat those rates in the future, he said.

"We now see this as an asset for our state," Adams said.