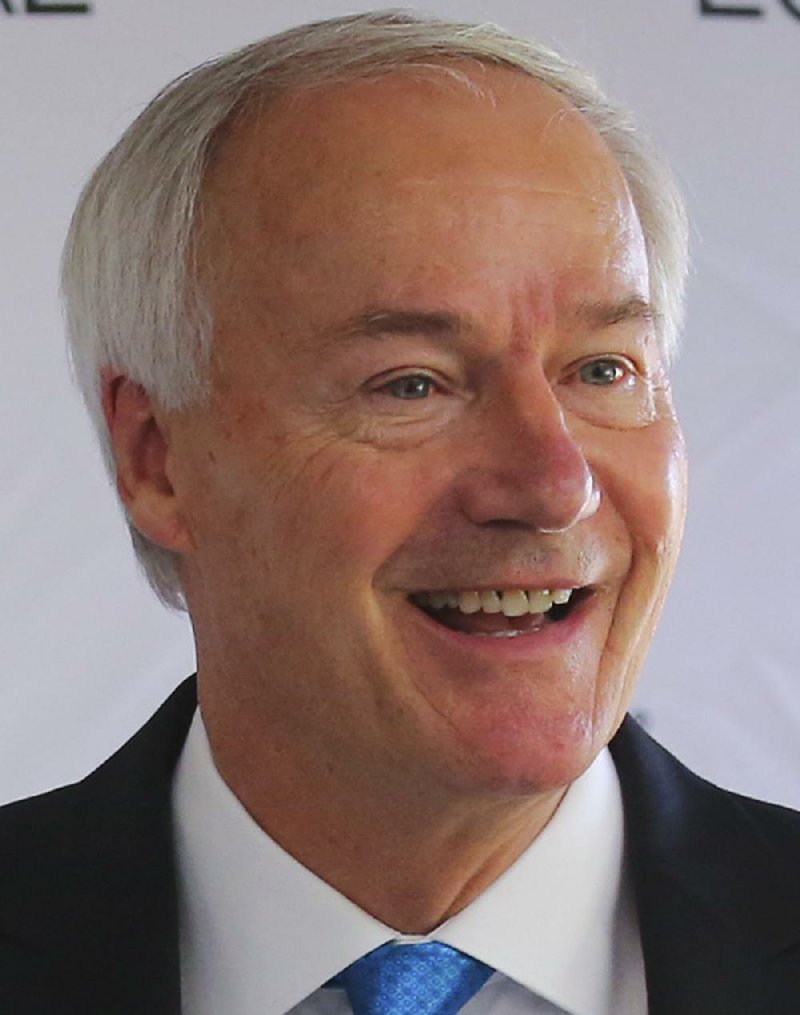 Gov Asa Hutchinson is shown in this file photo.

In response to President Donald Trump's decision to end a subsidy for health insurance companies, Arkansas Insurance Commissioner Allen Kerr on Friday approved double-digit rate increases for the plans that will be offered on the state's insurance exchange next year.

The rates approved Friday will be sent to the Centers for Medicare and Medicaid Services to replace smaller increases the companies had submitted under the assumption that the subsidies, known as cost-sharing reduction payments, would continue.

Arkansas Blue Cross and Blue Shield, which had been set to increase its rates by an average of 7.8 percent for its plans covering more than 202,000 Arkansans, was approved Friday for a 14.2 percent increase.

St. Louis-based Centene, which has plans covering more than 93,000 and had been set for a 9.9 percent increase, was approved for a 21.4 percent jump.

The increase approved for Little Rock-based QualChoice Health Insurance, which has exchange plans covering about 41,000 Arkansans, went from 9 percent to 25 percent.

At the Insurance Department's instruction, the companies had submitted two sets of rates to the department in August. Kerr approved the smaller increases that month, which assumed the subsidies continued throughout 2018.

Gov. Asa Hutchinson said in a statement Friday that he was working with state agencies and the insurers "to minimize the impact of this change on private insurance consumers" and enrollees in the state's expanded Medicaid program known as Arkansas Works.

Most of the 300,000 people enrolled in Arkansas Works receive the coverage through private plans offered on the state's insurance exchange, with the state using Medicaid funds to pay the premium.

The loss of the federal cost-sharing payments won't directly affect funding the state receives for Arkansas Works, but the resulting premium increases could increase the cost of the program.

The premium increases are expected to be the greatest for so-called silver plans, which are the same ones the state uses to provide Arkansas Works coverage.

In light of the potential increase in the cost of Arkansas Works, "I just have huge questions about the future of the program," said Marquita Little, director of health care policy for Arkansas Advocates for Children and Families.

Arkansas is paying 5 percent of the program's cost through Dec. 31 and will pay 6 percent starting in January, with the federal government paying the rest.

The state has budgeted a total of $100 million for its share, out of a total cost of $1.8 billion, in the fiscal year that ends June 30.

But even with fewer people enrolled, Joe Thompson, director of the Arkansas Center for Health Improvement, said the premium increases could raise concerns.

"If it increases the cost on Arkansas Works, it raises the question of cost-effectiveness, and I think it also threatens the level of political support necessary to continue the program in the fiscal session" next year, when state lawmakers will approve funding for fiscal 2019.

The waiver authorizing Arkansas Works limits the cost of the program to an estimate of what coverage would cost under the traditional, fee-for-service Medicaid program. If the cost from this year through 2021 exceeds a limit established in the waiver, the state will owe the difference to the federal government.

Hutchinson spokesman J.R. Davis said the cost of the program is "something we're going to have to continue to look at."

The cost-sharing subsidies are one of two types of assistance provided under the 2010 Patient Protection and Affordable Care Act to people who don't qualify for Medicaid who buy insurance through health insurance exchanges.

Tax credit subsidies lower the premiums for many consumers with incomes below 400 percent of the poverty level: $47,520 for an individual, for instance, or $97,000 for a family of four.

The cost-sharing reduction payments reimburse insurers for increasing the amount of coverage provided through silver-level plans to consumers with incomes below 250 percent of the poverty level.

Such plans are designed to cover 70 percent of a typical consumer's medical expenses. For lower-income consumers, however, the plans are modified so that they cover up to 95 percent of the expenses. The cost-sharing subsidies reimburse insurers for providing that enhanced coverage.

Ruling in a lawsuit filed by Republicans in the U.S. House of Representatives, a federal judge has said that the cost-sharing payments, unlike the tax credits, were never authorized by Congress.

The judge had allowed the payments to continue while the case was on appeal, but the Trump administration ended them on Thursday after Attorney General Jeff Sessions issued an opinion agreeing with the judge's conclusion.

Through the end of this year, insurers will have to continue providing the enhanced coverage to low-income consumers, but won't be reimbursed, Arkansas Blue Cross and Blue Shield spokesman Max Greenwood said.

Next year, she said, the higher premiums will help make up for the loss of the payments.

The size of the tax credits are tied to the premiums for silver-level plans, meaning the increases approved Friday are likely to result in larger tax-credit subsidies for individuals who qualify.

Because the increases are concentrated in the silver plans, even consumers who don't qualify for tax credits might be able to avoid the brunt of the increase by switching to a cheaper bronze plan, offering less coverage, or a gold plan offering more generous benefits.

Little said the changes, combined with reduced federal spending on consumer outreach, are likely to create confusion during the open enrollment period that runs from Nov. 1 through Dec. 15.

"It's doing the very thing we feared -- creating instability in the marketplace and confusion and chaos," Little said.