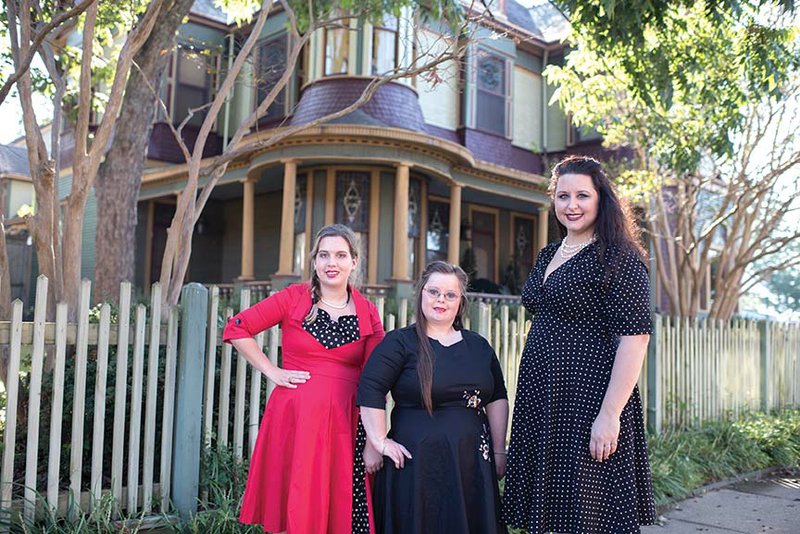 Dressed for the Civitan Services Murder-Mystery Dinner fundraiser are, from left, Bailey Krebs and Brooklyn Ables, both clients at Civitan Services, and Bekka Wilkerson, special events coordinator at Civitan Services. They are wearing apparel provided by the event’s boutique sponsor, Lead and Rubies of Benton.

BRYANT — Civitan Services will present its annual murder-mystery dinner at 6 p.m. Thursday at the Benton Event Center, 17322 Interstate 30 N. in Benton. This year’s fundraiser will feature a whodunit play by the Murder and Macabre Mystery Theatre Group of Hot Springs.

“And we have a new theater group that will present the play. The first hour will feature music by a jazz band and gaming tables, along with a fabulous array of appetizers prepared by Vibrant Occasions, which is part of Dinner’s Ready Catering in Benton,” she said.

“After the food has been served and the tables cleared, the theater troupe will present The Death of the Godfather,” Wilkerson said. “The notorious mobster Don Corleone, otherwise known as The Godfather, has been found murdered — face down in his evening meal. We will need help finding out who is responsible for sending The Don to that big cannoli shop in the sky.

“This is an interactive play, and the folks at the Murder and Macabre Mystery Theatre Group want the audience to really get involved with it this year.”

The Murder and Macabre Mystery Theater Group performs often at The Porterhouse Restaurant in Hot Springs and for other fundraising events in the area.

“We have performed around 20 plays over eight years,” said Lynn Janaskie of Hot Springs.

The other players are Lynn’s husband, Frank Janaskie; Danny and Debby Woods and Tammy Griffith, all of Hot Springs; and Bill Halbrook, who lives near Arkadelphia.

Patrons are encouraged to dress appropriately, “anything from business casual to 1950s mobster attire,” Wilkerson said.

She said the murder-mystery is the largest fundraiser of the year.

“It’s the same kind of event we have presented for the past few years, with just a few changes this year to keep it fresh,” Wilkerson said. “But at the end of the day, every penny we raise stays here in Saline County to benefit the men, women and children with developmental disabilities.”

Patrons may purchase individual tickets for $75 each or reserve a table for 10 for $700. Seating is assigned. Tickets may be purchased online at www.