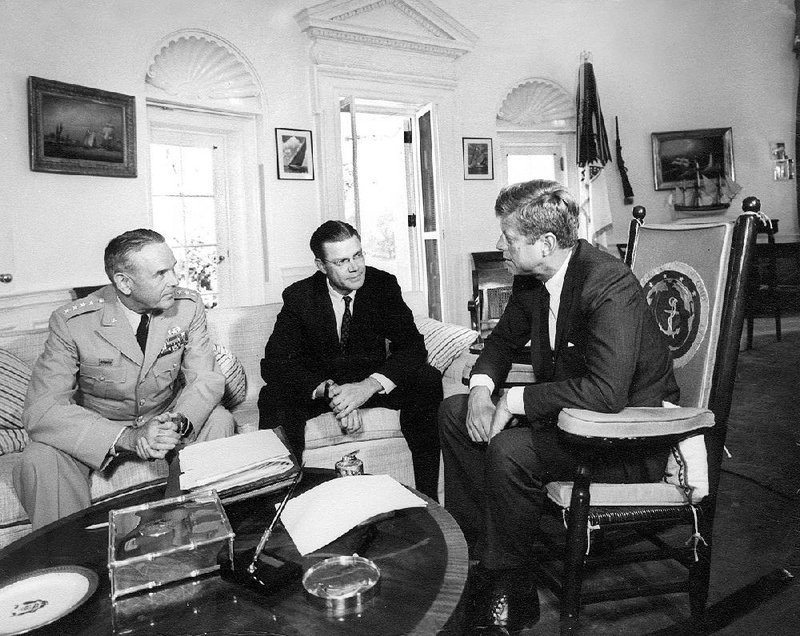 As a Vietnam veteran, this writer was apprehensive about pushing the "play" button on the Ken Burns Vietnam War documentary. Would it be little more than very painful propaganda?

The button was pushed, revealing this apprehension to be only half right. The film is not propaganda. Every American should see it.

Burns does a brilliant job dramatizing the almost unfathomable complexity, fiendish dilemmas and insatiable suffering of what was certainly the greatest American catastrophe since the Civil War.

Of course, Burns can't tell us everything, and he doesn't try. The picture he presents, however sharply and excruciatingly lucid, is nevertheless in one aspect out of focus and incomplete, not by what he shows, but what he doesn't.

Burns presents so very well how five American presidents were imprisoned by Vietnam, each unable to find the key to an honorable exit. He paints an agonizingly clear vision of their Asian prison, but averts his eye from an unopened door. It is invisible in the background shadows, but if you know it's there, it exerts an uncanny peripheral power in the film's darkly negative space.

Following the French defeat of 1954, the Geneva Conference constructed certain accords that divided the country North from South, with elections planned for 1956. The North's Marxist-Leninist leader, Ho Chi Minh, expected the South to fall like rotten fruit. But it didn't and, infused with almost a million refugees from the North and sustained with American aid, president of South Vietnam Ngo Dinh Diem and his brother Ngo Dinh Nhu of the secret police were surprisingly successful in shaping their country into a viable, quasi-stable, anti-Communist state.

What the South Vietnamese people were being offered was a choice between national unity under a tyrannical, bureaucratic dictatorship or division under an authoritarian, mandarin despotism. It was not a happy choice. Increasingly apprehensive about the success of the Diem and Nhu regime, the Communists (VC/NVA) ignited a vicious guerrilla war against it. Diem and Nhu fought back, but by the summer of 1963 their government was nearing its end.

But they had one card to play, and it was in the person of Mieczyslaw Maneli, head of the Polish delegation for the International Control Commission. The ICC, composed of three countries--India, Canada and Poland--was created to monitor the Geneva Accords.

Maneli was a Polish resistance fighter in World War II. Interned in Auschwitz in 1943, he escaped in early 1945. Post-war he taught law until assigned to the ICC.

Arriving in Saigon in early 1963, Maneli, along with his Indian counterpart Ramchundur Goburdhun, quickly established a back channel between Saigon and Hanoi.

They had help. John Kenneth Galbraith, America's ambassador to India, had laid the groundwork. In despair about Vietnam, Galbraith, with the blessings of India's prime minister Jawaharlal Nehru, formulated a peace initiative in early 1963. This called for neutralization of South Vietnam like Laos--a ceasefire and a coalition government. Galbraith later recalled that Kennedy said "to pursue the subject immediately."

Maneli and Goburdhun picked up the Galbraith baton. Goburdhun conferred with Diem, then Maneli visited Hanoi in March. Before leaving, Maneli cabled Warsaw:

It would be desirable for the North and the guerrillas to give Diem some respite. Then, as Diem promised Goburdhun, he would get rid of the Americans by himself and would join the India line. It would be necessary to facilitate direct North-South contacts. This could take place in [New] Delhi, where the two sides have their representatives.

Since the initiative contemplated an orderly transfer of power and the Americans a face-saving exit, the response from Hanoi, as expected, was positive. But why were Diem and Nhu interested? Either they had lost faith in winning and simply wanted to survive, or they wished to gain leverage over the Americans by threatening a separate peace.

Encouraged, Maneli made numerous trips from Saigon to Hanoi after the March 1963 conference.

Following up, Galbraith met with JFK on April 1 urging his initiative, but Under Secretary of State Averell Harriman and the Joint Chiefs resisted. Nevertheless Kennedy admonished "to be prepared to seize upon any favorable moment to reduce our commitment," even though it "might yet be some time away."

Later Kennedy replaced ambassador Frederick Nolting, opposed to removing Diem, with Henry Cabot Lodge, a hardliner known to favor a coup, who arrived on Aug. 22. Then, two days later, Kennedy authorized the infamous "August 24 Cable" to Lodge, demanding the removal of Nhu and threatening "the possibility that Diem himself cannot be preserved," if he did not cooperate.

Maneli then met with Nhu publicly on Aug. 25 and clandestinely on Sept. 2. The latter, discovered by the CIA, was reported to Lodge.

Rumors flew in Saigon about a "secret deal" between Diem/Nhu and Ho Chi Minh.

Alarmed, on Sept. 13 Lodge cabled Secretary of State Dean Rusk asking "what our response should be if Nhu, in the course of a negotiation with North Vietnam, should ask the U.S. to leave South Vietnam or to make a major reduction in forces?"

On Sept. 16, Nhu met with some of his generals (ARVN) revealing the Maneli back channel, explaining that the North was interested in trade, and that Maneli was "ready to fly to Hanoi at a moment's notice."

There is a saying, "If trouble comes, use it," and now Kennedy had plenty of trouble. His "favorable moment" had arrived and he had just been handed the key to the unopened door. The crises of 1963 and the Galbraith initiative offered both the rationale and means of exiting Vietnam. But would he use it?

Instead, JFK dithered. On Sept. 21 he sent Robert McNamara and General Maxwell Taylor to Saigon. On Oct. 2, they reported the war could be won by late 1965 with new leadership. No adviser in the field bought it, but Kennedy bought the hope of it. He bought that hope because he wanted to buy it; because he, like LBJ after him, wanted re-election in 1964, and neither wished it charged that they had lost Indo-China.

Perhaps, too, there was another reason: maybe the president remembered his letter of March 6 to Mrs. Bobbie Lou Pendergrass, whose brother, Army Specialist 5 James D. McAndrew, was killed in Vietnam in January 1963.

If Viet Nam should fall, it will indicate to the people of Southeast Asia that complete domination of their part of the world is almost inevitable. Your brother was in Viet Nam because the threat to the Viet Namese (sic) people is, in the long run, a threat to the Free World community, and ultimately a threat to us all also. For when freedom is destroyed in one country, it is threatened throughout the world.

Did JFK believe this? If so, perhaps he felt he had no choice. He pocketed the Galbraith/Maneli key and authorized the coup of Nov. 1. Diem and Nhu were executed as an ARVN general pronounced them traitors for negotiating with Hanoi. However, following the fall of a despot, the first day is frequently the best.

On Nov. 22 President Kennedy was assassinated and the U.S. was set in an upward spiral of mismanaged military half measures resulting in the climacteric of April 30, 1975, when it all collapsed.

After almost 12 more years of war with 58,318 American, 250,000 ARVN, 1 million VC/NVA, and at least as many civilian deaths, we see America in the last helicopter finally passing through that exit door in abject defeat.

Ken Burns shows us that cataclysm almost too well, but riding in that chopper was the one worthy thing America would ever salvage from Vietnam, the heroism and sacrifice of those she sent.

Phillip H. McMath of Little Rock is an author and trial lawyer who served in Vietnam in 1969-70 as an officer in the U.S. Marine Corps. Reprinted with the permission of the Washington Times.