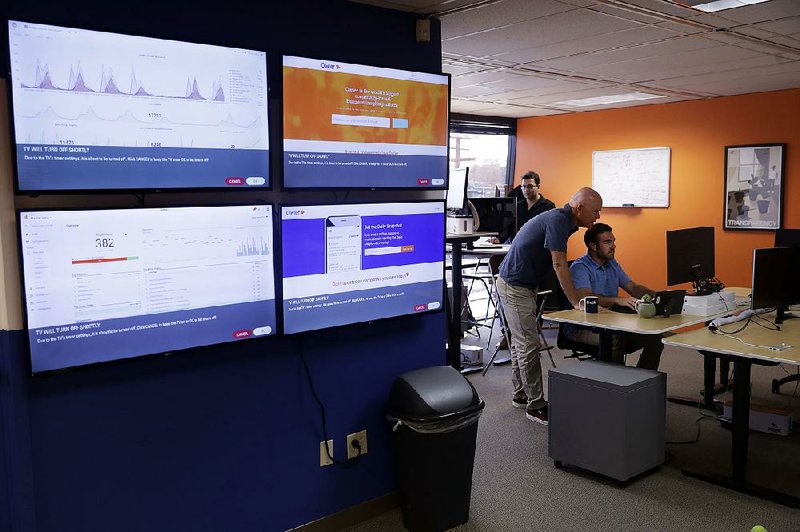 NEW YORK -- Triangle Pest Control's original workspace was a 2,000-square-foot garage housing 25 people -- the technicians who did the bug control work, as well as all the sales and support staff members. It was hard for employees to handle phone calls when everyone sat so close together.

"We were all crammed in," says Triangle spokesman Laura Simis. Then the company, based in Holly Springs, N.C., expanded into the space next door. Turnover among the support and sales staff fell by 45 percent in one year.

An uncomfortable workplace, whether due to space, noise or aesthetics, can be a drag on morale and make it harder for people to work. And the kinds of workspace amenities that Silicon Valley has become famous for -- big open areas, gyms, video games and nap spaces -- are beyond the reach of most small businesses. But many find that if they ask staff members what they want, there are ways to make their space cheerful and inspiring.

The three-story building that the Phelps Agency moved out of in 2016 inhibited the creativity of the advertising and marketing company, Chief Executive Officer Ed Chambliss says. A staircase linked the first and second floors of the building in Santa Monica, Calif., but local codes prohibited stairs between floors two and three. Third-floor staff members felt abandoned.

"They didn't feel like they were part of the group," Chambliss says. And for lower-floor staff members, it was "out of sight, out of mind" about their upper-floor colleagues.

The new space in nearby Playa Vista has everyone in one open office. Workstation partitions of frosted glass offer some privacy, and staff members can retreat to conference rooms or an outdoor deck for solitude. It's a more attractive building and located in a less urban area.

"It's a lot of little things that make a difference," Chambliss says.

The dominant trend in workspace design the past few years has been the open plan, with few or no offices, partitions and cubicles. Staff members often sit side-by-side at workstations or desks. One advantage is the open office's flexibility, and it can be cheaper to furnish than those with cubicles. Owners like open offices because they foster teamwork and camaraderie. The downside: Some staff members need a little isolation.

Small firms with big budgets can hire architects and designers to create better workspaces. But technology startup Owler needed to be frugal as it moved from one room into a bigger space in 2012. In order to create spaces in San Mateo, Calif., and a sales office in Spokane, Wash., the answer was design-it-yourself projects. Chief Executive Jim Fowler asked staff members what they wanted, and the answers touched on comfort and flexibility.

"We've set up a lounge room where team members can slip away for a power nap. Each member of the Owler team has the option to use a standing or sitting desk, so they can work in a manner that's most productive for them," Fowler says.

Fowler shopped at Ikea for desks. The walls are painted in the company's brand color, orange, and there's a huge owl -- a cloth representation that can be worn as a costume for Owler staff events and photos -- at the office entrance.

"Just because you're doing the lean thing, doesn't mean you can't spend your money on anything fun," Fowler says.

Sometimes the problem isn't space or layout, but clutter and cleanliness. If files and paraphernalia pile up, not only is that aesthetically unpleasant, it also increases what's known as visual complexity. That gives staff members' eyes and brains more to process and takes away from concentration and performance, says Sally Augustin, an environmental/design psychologist based in La Grange Park, Ill.

It's not uncommon for an owner running out of storage space to dump cartons of documents or equipment in the break room. That runs counter to the idea that a break room provides a respite from everything about work, Augustin says.

A thorough cleaning, bringing in leafy plants and clearing out stuff can go a long way toward making a better environment. "A new coat of paint can show you care, you're trying," Augustin says.

Many owners may not realize workspace quality is a factor in whether employees feel engaged, says Sonya Dufner, a partner with the design firm Gensler.

"Something that feels clean and organized definitely makes you feel like you're working for a professional organization," she says.

At marketing company Summerjax, co-owners Lauren Tanzeer and Wemberly Meyer consulted with the 10 employees about their preferences, then hired a design firm to create an open space for the staff and offices for themselves. Staff members have customized work stations, and the owners invite anyone who wants to bring their laptops to come into their offices and sit on the couch or the carpet and work. The building in Long Beach, Calif., has a landscaped courtyard and plants.

Factories can be made more worker-friendly too. Drinkware maker Tervis moved from a 35,000 square-foot facility to its current 90,000 square-foot location in North Venice, Fla., in 2005, consulting experts in ergonomics as it built new production and office space. There are three break areas including couches.

Company President Rogan Donnelly, and senior manufacturing engineer Dham Vayalur, say it's an ongoing process because the layout of the factory floor is periodically changed.

Businesses set up as retail stores can also be designed with staff members' needs in mind. Computer Repair Doctor, with nine stores in five states, uses dual work areas -- one where technicians are side-by-side, and another where they can work alone, says owner Matt Ham, who's based in Raleigh, N.C. Proximity enables staff members to consult one another, but sometimes they need solitude to focus.

"They're always chatting about this and that and they can get distracted easily. But it does keep the morale higher to keep everyone together," Ham says.

Growing companies need to allow for more expansion. When online bridal retailer Azazie launched three years ago, the handful of staff members fit into one room. When the San Jose, Calif., company's staff reached 10, "the noise level was getting troublesome and sometimes people complained to me that they couldn't focus," owner Charles Zhong says.

Azazie was able to expand next door. That worked until the staff reached 40.

"Productivity increased, but then started to drop slowly as we had more and more people," Zhong says. In July, Azazie moved to larger quarters. Zhong is now prepared for more changes, "constantly updating our office plan" for different stages of growth. 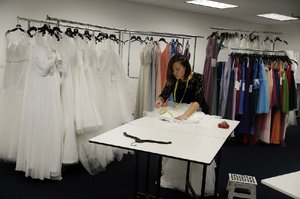