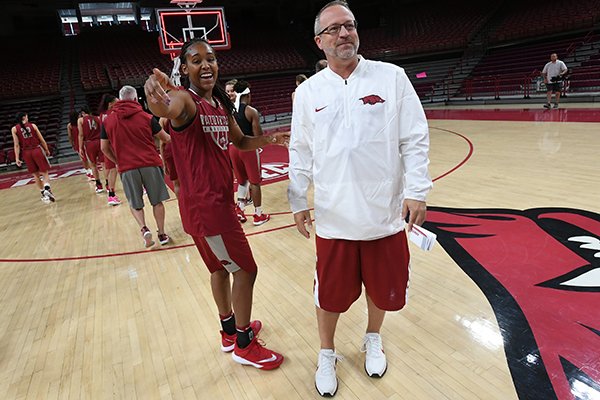 FAYETTEVILLE -- Coach Mike Neighbors has something in common with almost half of his Arkansas women's basketball players.

Six of the 13 players on the roster, like the Razorbacks coach, are new.

11 — Players eligible for this year’s team

6 — Newcomers on the roster, but two won’t be eligible this season because of transfer rules

2 — Victories last season in the SEC

The Greenwood native knows the area and Arkansas women's basketball. He has a degree from the University of Arkansas, Fayetteville, and he served on former coach Gary Blair's staff. Neighbors now returns as the man in charge, and he brought an entirely new coaching staff besides Arkansas alum Amber Shirey.

Having new coaches puts the newcomers on equal footing with the returnees in a sense, Neighbors said at Monday's media day at Bud Walton Arena.

Neighbors pointed to Grayce Spangler, a Fayetteville graduate, as an example, but also fellow freshmen Taylah Thomas and Macy Weaver.

"There's a lot being thrown at her right now, but the beautiful part for her and Taylah and Macy -- our three freshmen -- is that all the upperclassmen are really freshmen, too," Neighbors said. "So everybody's learning at the same time. The terminologies, the languages, the routines.

"The freshmen don't have as big a gap to close as some places had to have. So I think the timing for all of us comes at a really, really good time."

Senior Devin Cosper and junior Malica Monk have taken on leadership roles, even though Neighbors wasn't always sure Cosper would be with the team this season.

Cosper, who already has graduated, had the option to transfer to another school, but after talking to Neighbors she was persuaded to remain a Razorback. Neighbors likes what he's seen from the 5-10 guard who has played in 59 games over the past two seasons.

"From day one with her, I've seen a kid who really wants to leave the University of Arkansas a legacy," Neighbors said.

Neighbors -- who guided Washington to four postseason appearances, including one Final Four berth -- brings a faster pace with him. That's something the lightning-quick Monk, the team's top returning scorer at 9.1 points per game, is adjusting to on the fly. Last year's team, which finished 13-17 overall and in last place in the SEC (2-14), averaged just 64 points per game.

"Mal is that kid, 'Do you really want me to go this fast?' " Neighbors said. "Yes I do, and I want you to do it every time and every time that you don't, I'll assume you're tired and I'll take you out.

"She's learned that not to come out, she's going to have to continue to play extremely fast."

"He doesn't necessarily punish us," Swenson said. "He wants us to make mistakes so we can learn from those mistakes and encourage us to get better. In the process, we're laughing in practice. We're having a lot of fun. But we're also learning and improving at the same time."

The Razorbacks host Northeastern (Okla.) State on Nov. 2 in an exhibition game, then open the season against Sam Houston State on Nov. 10 at Bud Walton Arena.