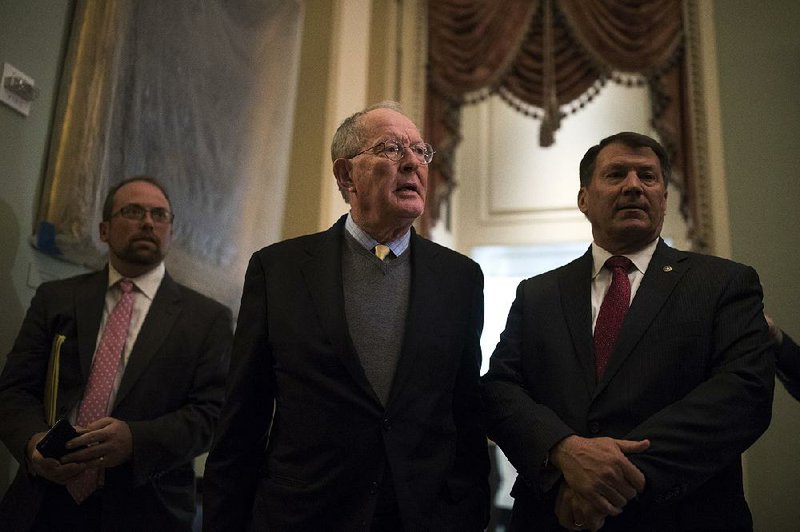 Republican Sen. Lamar Alexander (left), accompanied by Sen. Mike Rounds of the same party, speaks Tuesday on Capitol Hill in Washington about a two-year deal with Sen. Patty Murray, a Democrat, that would provide funding for key subsidies to health insurers.

Trump initially spoke approvingly of the deal, but after some conservatives denounced it as an insurance company bailout, the White House pushed back on the deal, too.

The agreement followed weeks of negotiations between Sens. Lamar Alexander, R-Tenn., and Patty Murray, D-Wash., that sought to address health insurance markets that have been in limbo after GOP failures to repeal and replace the Patient Protection and Affordable Care Act. The talks took on added urgency when Trump announced last week that he would end monthly payments the government makes to help insurance companies reduce costs for lower-income people.

Without that money, premiums for some people buying individual health plans would spike, and some insurers would flee the markets, industry officials have warned.

The Alexander-Murray deal would continue the insurer payments for two years while establishing new flexibility for states under former President Barack Obama's law.

"This would allow the Senate to continue its debate about the long term of health care, but over the next two years I think Americans won't have to worry about the possibility of being able to buy insurance in counties where they live," Alexander said in announcing the deal after a private lunch where he presented it to GOP senators.

"This agreement avoids chaos. I don't know a Republican or Democrat who benefits from chaos," he said.

Alexander said the president had encouraged his efforts in phone calls over the past two weeks. On Tuesday, Trump appeared to voice support for the plan even as he criticized insurance companies, declared the Affordable Care Act "virtually dead" and promised the demise of the health law in due time.

"It'll get us over this intermediate hump," the president said at a Rose Garden news conference, describing it as "a short-term solution so that we don't have this very dangerous little period."

He added that the long-term solution is to issue "block grants" to states to help people buy private insurance.

Hours later, at an appearance in front of a conservative Washington think tank, Trump said he was pleased Democrats had "finally responded to my call for them to take responsibility for their Obamacare disaster" and were working "with Republicans to provide much-needed relief to the American people."

But, he added, "While I commend the bipartisan work done by Sens. Alexander and Murray -- and I do commend it -- I continue to believe Congress must find a solution to the Obamacare mess instead of providing bailouts to insurance companies."

The White House later highlighted that passage to reporters, and a White House official said the line was intended to communicate that, while the president was supportive of Alexander's efforts to seek a bipartisan solution, he opposes the Alexander-Murray plan. The official spoke on condition of anonymity to discuss internal deliberations.

Indeed, White House officials had said they would want more in exchange than the additional state flexibility offered in the Alexander-Murray agreement.

Minutes before Alexander announced the deal, White House legislative director Marc Short emerged from the Senate GOP lunch saying "a starting point" in exchange for restoring the cost-sharing payments "is eliminating the individual mandate and employer mandate" -- the central pillars of the Affordable Care Act.

Initially, Trump continued making the cost-sharing payments with reluctance, but he declared last week that he would pull the plug. The payments, which cost about $7 billion this year, lower expenses such as co-payments and deductibles for more than 6 million people.

But discontinuing them would actually cost the government more money under the Affordable Care Act because some people facing higher premiums would end up getting bigger tax subsidies to help pay for them.

The Alexander-Murray deal bears the hallmarks of bipartisanship. For Republicans, state governments would find it easier to obtain waivers from certain requirements of the Affordable Care Act. But there would be explicit protections for low-income people and people with serious illnesses.

Consumers of any age would be allowed to obtain catastrophic insurance plans that typically have low monthly premiums but high deductibles and other out-of-pocket costs. Catastrophic plans provide protection against serious illnesses and injuries, but consumers must pay most routine medical expenses themselves.

Under current law, catastrophic plans are available only to people who are under the age of 30 or have received exemptions from the federal coverage requirement because they cannot afford other insurance.

For Democrats, not only would the cost-sharing reductions be brought back, but millions of dollars would also be restored for advertising and outreach activities that publicize insurance options available in the health law's open enrollment period, which starts next month. The Trump administration had slashed that funding.

"We will spend about twice as much or more than President Trump wanted to expend," Alexander said.

Accusing Trump of taking steps to "sabotage health care in our country," Murray said, "I'm really glad that Democrats and Republicans agree it's unacceptable and that the uncertainty and dysfunction cannot continue."

Senate Minority Leader Charles Schumer of New York hailed the agreement as a model for how the two parties could work together on other issues, such as taxes, the GOP's next project.

"I don't expect the Republicans to give up their goal of repealing [the Affordable Care Act]," Schumer said. "But in the meantime, stabilizing the system, preventing chaos and stopping the sabotage is in everybody's interest."

The cost-sharing payments have been in dispute ever since the Affordable Care Act became law. House Republicans sued in 2014 to block the payments, arguing they were illegal because Congress, which has power over government spending under the Constitution, had never specifically authorized them.

The Obama administration tried unsuccessfully to get the GOP lawsuit dismissed, but the Republicans won favorable rulings from lower-court judges, putting the payments in legal jeopardy even before Trump won the White House.

The Alexander-Murray plan drew mixed reaction from the GOP.

Rep. Mark Walker of North Carolina, chairman of the conservative Republican Study Committee in the House, quickly denounced the deal.

"The GOP should focus on repealing & replacing Obamacare, not trying to save it. This bailout is unacceptable," he wrote on Twitter.

Freedom Caucus Chairman Rep. Mark Meadows, R-N.C., who's been at work on a proposal of his own, was slightly more positive, calling the Alexander-Murray bill "a good start" but saying much more work needed to be done.

Earlier Tuesday, Sen. Lindsey Graham, R-S.C., who was golfing with Trump on Saturday when the president discussed the prospect of negotiations with Alexander on the phone, said that even if a deal is struck, it may not be enough of an overhaul to satisfy core Republican voters.

"That will be his challenge: How much is enough? I can't support the payments until you get some reform, but I realize that for the base, it's going to be about not keeping Obamacare in place," Graham told reporters.

GOP leaders in the House and Senate have also been cool to the Alexander-Murray negotiations, the more so because after their failures to repeal the Affordable Care Act, they are eager to turn their full attention to tax overhaul legislation. Senate Majority Leader Mitch McConnell, R-Ky., was noncommittal, telling reporters, "We haven't had a chance to think about the way forward yet."

Aides to House Speaker Paul Ryan, R-Wis., did not provide a statement from him.

Alexander said he and allies including Sen. Mike Rounds, R-S.D., would spend the next several days trying to build up support with the goal of formally introducing legislation later this week. If the legislation does pass, it would almost certainly be as part of a larger package including must-pass spending or disaster relief bills, and that might not be until the end of the year.

Murray lauded the effort, saying, "When Republicans and Democrats take the time ... we can truly get things done" for the American people.

Information for this article was contributed by Erica Werner, Alan Fram and Ken Thomas of The Associated Press; by Sean Sullivan and Juliet Eilperin of The Washington Post; and by Thomas Kaplan and Robert Pear of The New York Times. 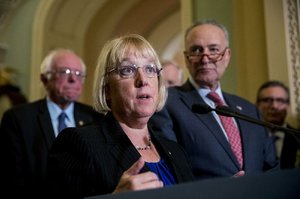