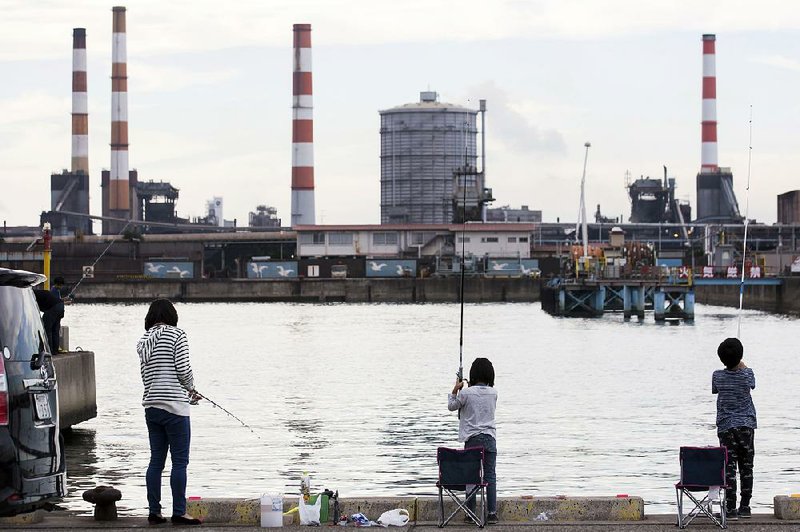 People fish across from a Kobe Steel Ltd. plant in Kakogawa, Hyogo, Japan on Saturday. The company said Tuesday that it is cooperating with the U.S. Department of Justice in an investigation of claims that it falsified certifications on the strength and durability of some of its metals going back to 2007.

Kobe Steel said it will cooperate with the U.S. Department of Justice after the agency requested documents related to the fake data scandal that risks engulfing Japan's third-biggest steel-maker.

Kobe has said some 500 companies worldwide are in a supply chain tainted by admissions that it falsified certifications on the strength and durability of metals going back to 2007, including automotive giants Ford and General Motors and the U.S.'s biggest plane-maker, Boeing. The besieged Japanese company said in a statement it can't yet quantify the effect of the crisis on its earnings.

The Justice Department's involvement means the company is "going to have to go overboard to be cleaner than clean," said Alexander Medd, managing director of Bucephalus Research Partnership in Hong Kong. "This is going to require a complete mental shift and rebuilding of trust." Japan's Ministry of Economy, Trade and Industry has also asked the company for a report on the scandal including causes and remedies.

Kobe's global review of its units will probably reveal that data falsification began even longer than 10 years ago, according to a company executive, who asked not to be named as the information isn't public. The Nikkei newspaper reported Tuesday that irregularities over quality control at Kobe's plants in Japan date back decades, citing a person it didn't identify.

As the steel-maker works to contain the fallout, it has briefed analysts that short-term liquidity isn't an issue as it seeks to generate cash including via asset sales.

Kobe Steel is also considering the sale of its real estate unit, the executive said. Jefferies Japan Ltd. analyst Thanh Ha Pham said that, while the company has enough cash and funding to cover short-term needs, it's looking to raise money by lowering working capital and through asset sales, according to a note that followed a briefing with Kobe's management on Monday.

Last week saw Kobe's stock value collapse 41 percent as investors rushed to punish the latest instance of corporate malfeasance in Japan, after similar misconduct around data at companies such as Mitsubishi Motors Corp. and Asahi Kasei Corp. Kobe has since pared those losses, closing 3.1 percent higher in Tokyo on Tuesday for a two-day gain of 6 percent.

Kobe Steel could face losses of as much as $1.8 billion in a worst-case scenario arising from its misconduct, according to Nomura Securities, while Japan Credit Rating Agency has placed the company's A rating on watch for a possible downgrade.

Nomura's tally assumes customers would be forced to recall products and then have Kobe assume the cost, and that it will have to pay compensation, including to investors, credit analyst Shintaro Niimura said in a report Monday. The bank estimates that about 30 percent of Kobe's aluminum and copper, two of the metals subject to data falsification, is bought by automakers.

Still, with about $6.2 billion in capital, the worst case would only put a dent in Kobe's capital-adequacy ratio, which would fall from 30 percent to 23 percent, according to Niimura. He cautioned that losses could widen if evidence comes to light that the scandal has affected more products than reported so far by Kobe, which on Friday added another nine to the list, including core steel products, to make 16.

The units implicated in the crisis make the steel, copper, aluminum and other materials that account for over half the company's revenue.

Kobe's property unit, Shinko Real Estate Co., had fixed assets of about $801 million, according to a March filing. The company is considering a number of sales options for the business, which leases and sells real estate, including a full divestment, according to the executive, although he said the sale isn't linked to the company's wider problems.

None of Kobe's customers has so far raised specific safety concerns or recalled products. Jefferies' Pham cited management as saying that customer feedback, including from beverage can producers and railway companies, is that no immediate recalls are required and products involved are not a safety concern.

Some of Japan's biggest automakers -- Toyota, Nissan and Subaru -- are investigating whether any car parts contain falsified materials from Kobe, according to company spokesmen. Toyota supplier Denso Corp. is also checking its products, while Tokyo Metro Co. and Seibu Railway Co. are investigating if Kobe's aluminum parts are used in their trains.

Kobe Steel declined to comment on the details of the analyst meeting on Monday. A spokesman said it's investigating past records to determine the cause of the falsifications.