Amazon worth it, economists say

Incentives expected to pay off for winner in jobs, status by CHRISTOPHER RUGABER THE ASSOCIATED PRESS | October 19, 2017 at 2:10 a.m. 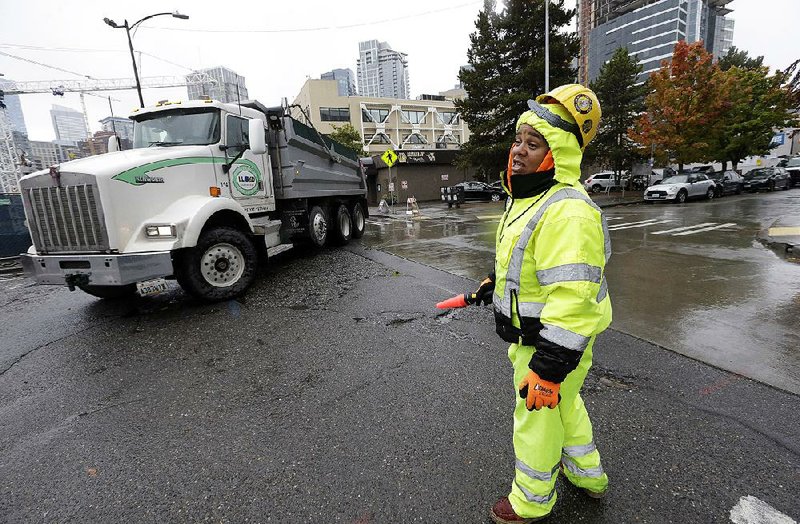 WASHINGTON -- Dozens of cities are working frantically to land Amazon's second headquarters, raising a weighty question with no easy answer:

Is it worth it?

Amazon is promising $5 billion of investment and 50,000 jobs over the next decade and a half. Yet the winning city would have to provide Amazon with generous tax breaks and other incentives that can erode a city's tax base.

Most economists say the answer is a qualified yes -- that an Amazon headquarters is a rare case in which a package of at least modest enticements could repay a city over time. That's particularly true compared with other projects that often receive public financial aid, from sports stadiums to the Olympics to manufacturing plants, which generally return lesser, if any, benefits over the long run.

For the right city, winning Amazon's second headquarters could help it attain the rarefied status of "tech hub," with the prospect of thousands of highly skilled, well-paid workers, upgrading a city's urban core and fueling job growth beyond Amazon itself.

Other companies would likely move, over time, to that city, including employers that work with Amazon in such cutting-edge fields as virtual reality and artificial intelligence. Some Amazon employees would also likely leave the company to start new businesses, creating more job growth.

In theory at least, those trends could help attract more highly educated residents in a virtuous cycle that helps increase salaries and home values.

"This definitely beats other deals that I have seen, to be sure," said Enrico Moretti, an economist at the University of California, Berkeley and author of The New Geography of Jobs. "It would certainly increase the attractiveness of that city for other well-paying high-tech jobs."

It's that hope that has triggered excitement, from such metropolises as New York, Boston and Chicago to tiny Maumee, Ohio (population 14,000). Today is the deadline for submissions.

High-tech firms such as Amazon create a "clustering effect," Moretti's research has found, whereby a company attracts workers with specialized knowledge in, say, software and data analysis. These workers are rare in other cities but reach a critical mass in a tech hub. And higher-skilled workers are more productive when they work in proximity to each other, sharing ideas and experiences.

A result is that each new high-tech job can create up to five more jobs, Moretti estimates. That's far more "spillover" than is true in manufacturing, where a new job typically creates fewer than two other jobs, he calculates. His findings suggest that Amazon's second headquarters could lead to as many as 300,000 total jobs over a couple of decades.

The spillover job growth would likely include not only other high-tech positions but also professional occupations -- doctors, accountants and architects, for example -- in addition to higher-paying blue collar jobs, in, say, construction, and lower-paid service jobs at retailers and restaurants.

By contrast, manufacturing jobs tend to decline over time, Moretti said, as factories become more efficient through automation or succumb to competition from overseas.

"When you lock in manufacturing, you don't know what will be there in 10 years," he said.

Like most economists, Moretti doesn't think cities should dangle billions in subsidies to Amazon. Many say local governments should focus instead on developing assets that would benefit the larger region, such as offering to upgrade community colleges.

Still, for a city struggling to develop a modern economic base, landing Amazon could be transformative.

"Not all corporate relocations are scams, and not all of them are created equal," Mark Muro, a senior fellow at Brookings Institution's Metropolitan Policy Program, said, referring to Amazon's HQ2 announcement. "It's certainly big enough that one place, particularly in the Midwest, could have its fortunes meaningfully improved."

That said, the competition for Amazon might not be as intense as it seems: Few metro areas meet the company's criteria, including a population of more than 1 million people, an international airport and a "strong university system." That reality should give the eligible cities some leverage, Moretti said.

Amazon's search comes at a particularly fraught time, with regional income and employment gaps widening. The effects of clustering have lifted a limited number of cities far above the rest of the country.

EMSI, an economic consulting firm, calculates that workers in only five of the nation's 100 largest cities experienced healthy average annual pay increases of at least 2 percent, adjusted for inflation, from 2012 through 2016: San Jose; Seattle; San Francisco; Raleigh, N.C.; and Madison, Wisc. The first four are tech hubs, while Madison is the home of the University of Wisconsin.

And the Economic Innovation Group, a think tank, found in a recent report that the nation's wealthiest communities, where about one-quarter of all Americans live, captured 52 percent of new jobs from 2011 through 2015.

Amazon built its headquarters in Seattle in 1994 partly because Microsoft's presence there had attracted many software programmers, Moretti notes. Microsoft employees went on to start other companies in the area, including Real Networks and Expedia.

Boston, one of many cities competing for Amazon's second headquarters, has benefited from clustering effects in the past decade. Amazon and Apple have already set up smaller offices there, mostly in search of voice-recognition and artificial intelligence expertise.

Boston is also now the site of a robotics cluster, thanks in part to iRobot, the company that makes the Roomba automated vacuum, which started there in 1990.

Reese Mozer, chief executive of American Robotics, chose to start his firm in Boston even though he had earned an advanced degree from Carnegie Mellon University in Pittsburgh.

"Boston just had a little bit more access to capital and talent than Pittsburgh," Mozer said.

Amazon's preferences -- which also include mass transit and a "highly educated labor pool" -- suggest that the ultimate winner might turn out to be a city that is already economically vibrant.

"When you find places like that that have all those characteristics, that place is likely already doing well," said John Lettieri, a co-founder of the Economic Innovation Group.

Many analysts say they hope Amazon chooses a city far from the tech hubs on the coasts, so the new headquarters can benefit a city that needs the lift. Even so, the company's decision isn't going to address the country's geographical imbalances. It would take "50 Amazons" to do that, Muro said.

Landing Amazon is like "trying to win the lottery," Lettieri said. "Economic development can't be dependent on these once-in-a-generation opportunities."

Information for this article was contributed by Matt O'Brien of The Associated Press.