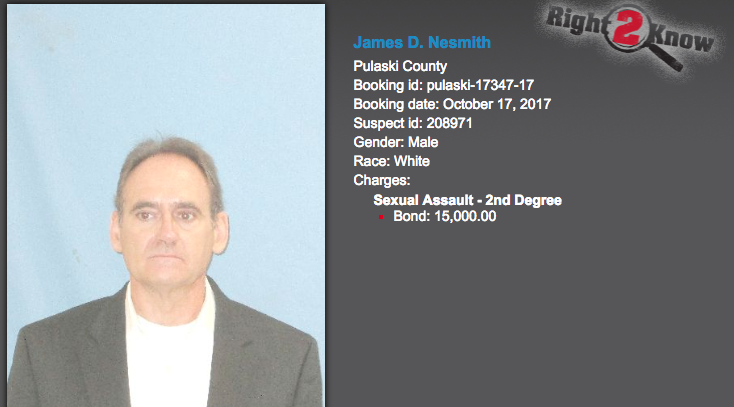 An Arkansas Children's Hospital doctor arrested in the sexual assault of a teenage boy has agreed not to practice medicine until his criminal case is resolved, an attorney for the Arkansas State Medical Board said Thursday.

Meeting via conference call, the board also suspended the license of a former respiratory therapist at the hospital who was arrested after authorities said he arrived for what had been advertised as a sexual encounter with a 15-year-old boy and the boy's father.

The doctor, James Nesmith, 53, of Little Rock was arrested Tuesday on a charge of second-degree sexual assault in an attack that police said happened about 12 years ago.

According an arrest affidavit, a 26-year-old man told police that Nesmith had grabbed his genitalia while they were both naked during a hiking trip when the accuser was about 14 years old.

Arkansas Children's Hospital said in a statement Wednesday that the criminal allegations do not involve the hospital or patients.

Kevin O'Dwyer, the medical board's attorney, told the board on Thursday that Nesmith had agreed through his defense attorney, Bill James of Little Rock, to sign an order barring him from practicing medicine until the criminal charges are resolved.

Until then, O'Dwyer said, taking further action against Nesmith's license would be difficult because prosecutors typically advise accusers not to testify before the board while the charges are pending.

The board unanimously agreed to the order, with the stipulation that it will suspend Nesmith's license if the order isn't signed within a week.

James confirmed after the meeting that Nesmith agreed to the order's terms. He said Nesmith pleaded innocent to the charge in Little Rock District Court on Wednesday.

"They're allegations from years ago, and we have very little information about them other than he denies he did anything inappropriate with anyone," James said.

According to the police affidavit, Nesmith's accuser said Nesmith was a mentor to teenage boys at Covenant Presbyterian Church in Little Rock and would take them on hiking trips, during which they would go skinny dipping. He told police that he and Nesmith would engage in "naked hugging," and that Nesmith fondled himself in front of him.

The Rev. Tim Reed, a minister at the church, told authorities in December 2015 that he had become aware of sexual abuse allegations against Nesmith, police said. Reed said several teenagers had reported that Nesmith had touched their genitals, according to the affidavit.

As an associate professor at the University of Arkansas for Medical Sciences, Nesmith was involved in adolescent and sport medicine, UAMS spokesman Leslie Taylor has said.

The respiratory therapist, Christopher Michael Curtis, 38, of Little Rock was arrested Oct. 12 and charged with Internet stalking of a child.

Curtis began communicating through text messages with an undercover Faulkner County sheriff's office investigator on Oct. 11 after responding to an online post advertising "deviate sexual contact" with a father and son, according to an affidavit filed in Faulkner County Circuit Court.

The Medical Board on Thursday suspended Curtis' license pending a hearing, which O'Dwyer said would likely not occur until the criminal case is resolved.