Neighbors no stranger to SEC colleagues 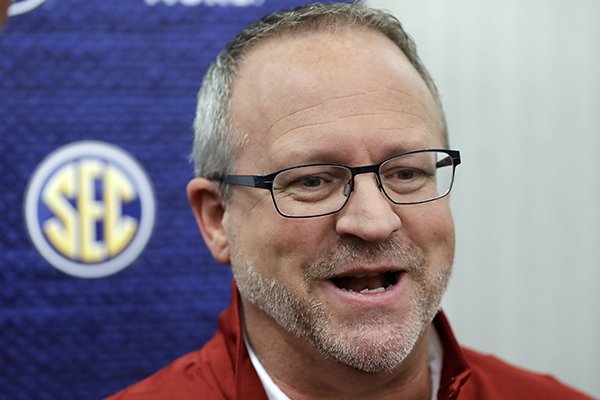 NASHVILLE, Tenn. -- There was a time when Gary Blair, Vic Schaefer and Mike Neighbors worked together on the Arkansas Razorbacks women's basketball staff.

Blair was the head coach, Schaefer an assistant coach and Neighbors director of operations.

Now they're all SEC head coaches.

Blair is in his 15th season at Texas A&M where he won a national championship in 2011.

Schaefer is in his sixth season at Mississippi State, which beat Connecticut in the Final Four last season to end the Huskies' 111-game winning streak before losing to South Carolina in the national title game.

Neighbors is in his first season at the University of Arkansas, Fayetteville after leading Washington to a Final Four appearance in 2016.

All three were together again Thursday at SEC women's basketball media day.

"Between Vic and Mike and I, we're sort of like the Three Musketeers," Blair said. "We all care about each other and our families.

"I'm glad to have Mike in the league with us. It's going to be special."

Neighbors said he owes his career to Blair and Schaefer.

"I wouldn't be coaching without those two guys," Neighbors said. "Playing them now in the SEC, we'll fight like cats and dogs for 40 minutes.

"Then they'll be at my house if they're not flying out that night or I'll expect to get an invite to their house."

Neighbors, a Greenwood native and an Arkansas graduate, sought advice from Blair and Schaefer before taking the Razorbacks job.

"Both of them were very realistic about it," Neighbors said. "They made sure I understood exactly what the league does to you, but they both at the end of the day said, 'We've played against your teams. You're ready for this.' "

Neighbors' Washington teams split two games against Blair's Aggies in a home-and-home series, with Texas A&M winning 71-46 in College Station during the 2013-14 season and the Huskies winning 71-49 in Seattle during the 2014-15 season.

Neighbors' final game at Washington was a 75-64 loss to Schaefer's Bulldogs in an NCAA Tournament Sweet 16 game last year.

"Mike's a dear friend and colleague," Schaefer said. "I'm certainly excited for him and his family and that he's at the U of A.

"They've got an Arkansas boy that loves his state, loves his university and I couldn't be happier for him."

Neighbors said a conversation with Schaefer helped convince him to leave Washington -- where he had an 89-41 record and three consecutive NCAA Tournament appearances -- for Arkansas.

"For me it's the dream job," Neighbors said. "Vic reminded me of that.

"He said, 'Are you telling me that if I had told you in 1999 with you sitting there on my couch breaking down film that 17 years from now you could be the head coach here and you wouldn't take it?' He said, 'Are you kidding me? You take that job.' "

Schaefer said he's not surprised Neighbors left a program he had built into a national power to accept the challenge at Arkansas.

"I just think that's his loyalty and love for his university," Schaefer said. "When you get somebody like that, it's more than just a job to them. They're emotionally committed."

This is Neighbors' third stint at Arkansas. He was an assistant coach under Susie Gardner during the 2006-07 season.

"I'm a Razorback through and through," he said. "I understand the expectations that are placed on the teams at the university, and I was ready to embrace that finally."

Neighbors, 48, said as tough as it was to leave Washington, he felt this might be his one chance to be Arkansas' coach.

"I went back and forth for a number of days because it was not a no-brain decision," Neighbors said. "What it came down to was, I felt like whoever got this job is going to turn this thing around, and if that person was young, this job would never open for me again."

Neighbors said he decided to follow the advice of his grandfather, James Neighbors.

"My grandfather always said, 'Too many times in life you fail to recognize an opportunity until it no longer is one,' " he said. "That's what hit me."

Arkansas finished last in the SEC with a 2-14 record last season is picked 14th in the preseason media poll.

Neighbors said the poll is no surprise given that Arkansas lost star forward Jessica Jackson from last season's team.

"Mike's the perfect fit for Arkansas because he'll have the high school coaches behind him," Blair said. "He's going to bring back the tradition.

"He'll remember the past, where a lot of others have wanted to forget the past and only think about the future."

Schaefer, whose first Mississippi State team went 13-17, said Neighbors is taking over a better situation than he did with the Bulldogs.

"Mike will do it the right way," Schaefer said. "He'll do a great job in recruiting. He's a heck of a coach and he'll be fine. I think the biggest thing is he won't panic."

Blair predicted Arkansas will be in the NCAA Tournament by Neighbors' second season.

"That's what I did," said Blair, whose second Arkansas team went to the 1995 NCAA Tournament. "Mike can do it, too."