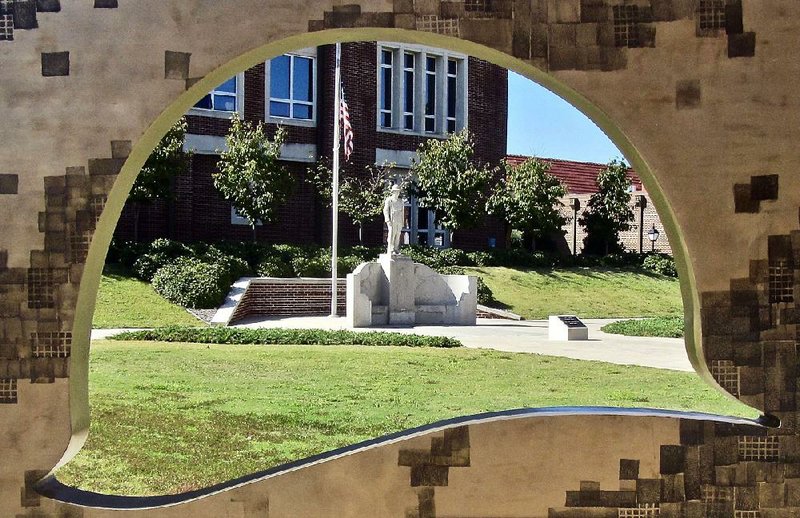 The statue of a Doughboy honoring six Hendrix College alumni who died while on military duty during World War I can be viewed through the silhouette of a newer monument to two brothers lost in action in Afghanistan during the past decade.

CONWAY -- War memorials can be controversial, as witness this year's strident arguments over statues of Confederate leaders. But there is no such debate about the various Natural State monuments honoring Arkansans who fought and sometimes died in World War I.

Hendrix College in Conway displays what the Encyclopedia of Arkansas History & Culture calls "the most elaborate of the World War I memorials located in Arkansas, most of which consist of depictions of American Doughboys."

The monument, just outside the college's Young-Wise Memorial Stadium, is one of 10 World War I tributes highlighted on the Department of Arkansas Heritage's website during this year's centennial commemorations of what was originally called the Great War.

Since its unveiling in 1920 on the west lawn of Tabor Hall, the memorial has done its share of traveling, having been moved five times. The most recent move in 2013 came along with the addition of twin sculptures honoring brothers who died fighting in Afghanistan in the past decade after graduating from Hendrix.

The newer bronze sculptures are stylized negative silhouettes of combat helmets, in striking contrast to the older statue of a Doughboy standing at attention in full uniform. Below the World War I soldier, the base features twin seats carved as allegorical female figures representing peace and liberty.

That original monument lists the six Hendrix alumni lost during World War I, five from influenza during the 1918 pandemic and one killed in action. The combat victim, Lt. Robert Young, was a student-athlete who volunteered for the Army and died fighting in the Argonne forest in France.

Plaques on the two bronze silhouettes honor Navy Seal Jeremy Wise, killed in Afghanistan in 2009 while working with the CIA, and Green Beret medic Benjamin Wise, mortally wounded in an Afghan firefight in 2012.

The newer memorials' sculptor, Ken Hruby, described his concept prior to the dedication four years ago:

"The negative silhouettes represent the loss or absence of the Wise brothers in a clear, visible way. The distance between the silhouettes and the Doughboy represents the time span of 90-odd years between the first and the latter two combat deaths. The siting of the three elements unifies the plaza as a collective memorial rather than individual homages to these three fallen warriors."

The other World War I memorial sites highlighted by the Department of Arkansas Heritage are in Jonesboro, Fort Smith, Helena-West Helena, Paragould, Fayetteville, Eureka Springs, Melbourne, Manila and Van Buren.

The site in Manila is Arkansas' smallest state park, honoring Herman Davis, who died in 1923 from after-effects of a German poison-gas attack. He was listed among that war's 100 greatest heroes by the American commander, Gen. John J. Pershing.