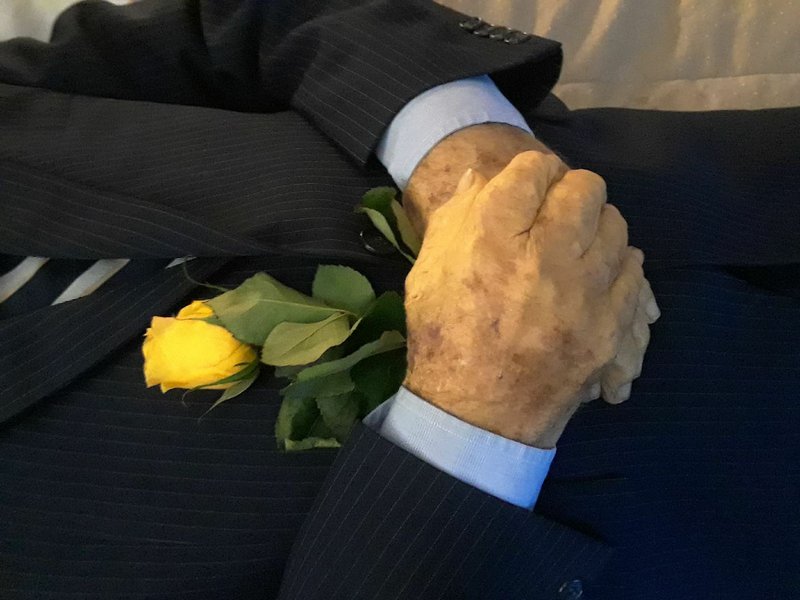 Courtesy photo The body of Andrew Jackson Jones was cared for after his death by his family, then buried without being embalmed or cremated. His daughter, Vickie Kelley, is host of this weekend's Be a Tree: The 2017 Arkansas Green Burial Conference in Fayetteville.

To mark his 70th birthday, he rode in the Great American Cattle Drive.

At 80, he was teaching his grandsons to build houses.

When: Friday through Wednesday

Cost: Free, but donations are accepted.

• “The Illustrious and the Eccentric,” with Abby Burnett and J.B. Hogan, 10 a.m., Evergreen Cemetery

According to Ed McClure, an attorney and partner in Matthews, Campbell, Rhoads, McClure & Thompson in Rogers:

At his 90th birthday party, he was teaching granddaughters to jitterbug.

The man knew how to live

Obituary for her father

Andrew Jackson Jones also knew how he wanted to die, and he did so, on his own terms, in the early morning hours of Oct. 5 at his home in Edwards, Miss. Kelley was holding him in her arms when he took his last breath, she remembers.

When they were ready, Kelley, her son and her sister proceeded to do what very few families do in 2017. They washed his body with an antibacterial cleanser, dressed him in a suit and tie, positioned his head and arms properly so they would look nice for the rest of his friends and family -- then they called the regional hospice organization so a nurse and the coroner could sign off on his death.

And from that time until 10 o'clock the morning of Oct. 6, Jones' body rested on the bed where he had slept. "His family celebrated [his] life by gathering for a home wake through the day and the full-moon night of Thursday," Kelley wrote in the obituary.

"We had sandwich trays and fruit trays and coolers of drinks, and everyone said it was exactly what Papaw would have wanted," she remembers now, her huge blue eyes looking into the past.

Jones had selected his casket 25 years ago, and while it wasn't biodegradable -- which Kelley would have preferred -- it was the "hardwood coffin of his choice." On that Friday morning, the funeral home brought it to the house, Jones' body was moved into it, then transported to his hometown in the Mississippi Delta, where it waited at the mortuary until a graveside service Oct. 7. The body was not embalmed, but Jones' elderly sisters and a nephew were still allowed a private viewing before the funeral, Kelley says, "and not a person who saw him could have been more impressed with how he looked." When the time came, the casket went straight into the ground, with earth below it, around it and above it.

It was the first time Kelley, a longtime advocate for "green" or "natural" burial, had reason to test her resolve that bodies should be buried without embalming, without the expensive vault that promises perfection in perpetuity, without using the energy required for cremation. She is one of the founders of the Natural State Burial Association, which earned its 501(c)3 nonprofit status in February 2016, and one of the creative forces behind this year's "Be a Tree: The 2017 Arkansas Green Burial Conference." The event -- set for Oct. 27 through Nov. 1 -- is intended to have more "intimate participation" than last year's conference, known as "Death Fest."

"A lot of last year's programming was 'speaker at the podium'," she says. "This year, it will be more 'share your story' interactive."

"The conference will include a variety of workshops, speakers and conversations exploring green burials, home funerals, philosophies of death, land use issues and the environmental impact of disposition," says Walter Schmidt, a Natural State Burial Association board member. A juried art exhibition continues through Nov. 1 in the Parish Hall of St. Paul's Episcopal Church in Fayetteville, "and an evening production titled 'Death Fest' will feature performing arts at Stage 18 on Saturday."

The premise of the event remains the same, Kelley adds. At this point, there are roughly 100 green cemeteries in the United States, but there are none in Arkansas. "I was blessed to be present when the universal consciousness was ready" to bring the idea forward, she says. "I thought it was inexcusable that the Natural State didn't have a natural cemetery." In time, she hopes to see those cemeteries exist on all three levels -- hybrid, in which natural burials share space with coffins and vaults; natural, areas that are clearly cemeteries, with flat tombstones allowed; and conservation, a wilderness preserve where only a magnetic nail marks the GPS coordinates of a grave. The Natural State Burial Association's mission is "to provide environmentally sound burial and diverse memorial options through the founding and operating of cemeteries designed to conserve natural landscape."

So how did she manage to bury her father in the manner he wished to be buried?

The process required her to be "clear, yet respectful, but emphatic. I had to know what my rights were and push [the powers that be] out of their comfort zones."

But how did Kelley get through the care of her father's body?

"I knew what my dad wanted," she says. "And if I am real, if I believe what I say I believe, I have to do it in this manner. I just came from a place of love."

Everything Kelley did for her father also is legal in Arkansas, she says.

"With an easily obtained permit, one can even transport the body. The fact that few people know their rights is what makes the upcoming conference so important."