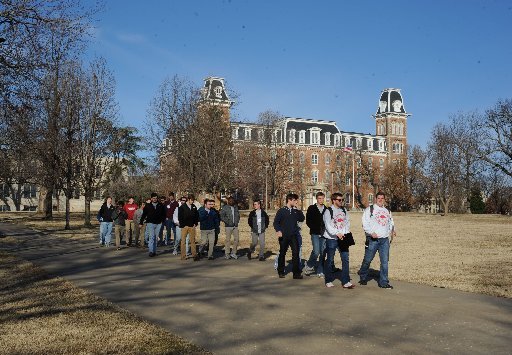 A crowd walks Saturday, Feb. 13, 2016, past Old Main and the University of Arkansas campus in Fayetteville.

No vote will take place next week on a proposed University of Arkansas System policy update criticized by faculty members as weakening academic tenure, a university spokesman said Monday.

The draft policy update sent last month to top administrators at UA System campuses said dismissal proceedings for tenured faculty would begin one year after an "unsatisfactory performance rating" if the annual evaluation does not improve.

Faculty members at different campuses in the UA System said they were not consulted in the drafting of the guidelines and questioned the specifics of the proposed changes.

The UA System statement Monday comes after faculty members at different campuses said they had expected a vote on the policy revision at the next trustees' meeting, scheduled for Nov. 8-9 in Little Rock.

"The [system's] board of trustees has ultimate authority. But the way the process is supposed to work is everybody is supposed to be working together, with involvement from the people who actually understand these issues," Joshua Silverstein, a University of Arkansas at Little Rock law professor, said in a phone interview Friday.

At stake beyond job protections is the academic freedom that faculty members need to speak out and pursue research of importance to the public, said Silverstein, who has written a detailed critique of the proposed policy change.

Told of Monday's statement from the UA System, Silverstein called it "an extremely positive step."

"This shows appropriate responsiveness to the concerns of the faculty about both the substance and the process," Silverstein said.

UA System spokesman Nate Hinkel said in an email that the draft revision was delivered to campus chancellors as a way to gather feedback. Any policy changes require approval from the 10-member board of trustees, Hinkel said.

Information will be presented at next week's board meeting "about the basis for the revisions and the process moving forward to finalize drafts for future consideration."

The intent is "to bring UA System policy in line with current law and practice," Hinkel said, with many of the changes intended to "bring clarity to standards that already exist in practice."

But Leanne Lefler, president of the academic senate at the University of Arkansas for Medical Sciences, said that when the group's council of approximately 25 faculty members took a look at the policy, "we found it to be confusing."

"The language could be misconstrued as arbitrary," said Lefler, an associate professor of nursing.

Gregory Scholtz, with the Washington, D.C.-based American Association of University Professors, said that typical grounds for dismissal "are such things as gross misconduct or professional unfitness."

The member organization advocates for academic freedom, and Scholtz, associate secretary and director of the organization's Department of Academic Freedom, Tenure and Governance, said that "unsatisfactory performance" is a vague standard for dismissal.

Tenured faculty members have the right of continuous appointment, according to current UA System policy. It also lays out a requirement for annual reviews, which form the basis of tenure and promotion recommendations from an academic department chairman or similar campus academic official.

Even for faculty members who receive tenure, the annual reviews continue.

Unlike the existing policy, the draft update ties together "unsatisfactory performance" ratings with dismissal.

It is a revision of the UA System's Appointments, Promotion, Tenure, Non-reappointment, and Dismissal of Faculty board policy.

"The language could be more specific because that unsatisfactory performance term is used and really would need to be clarified," Lefler said.

Silverstein said that with the proposed revision, "it's too easy to come up with a cover reason to get rid of a faculty member you don't like."

He said he's been at UALR for more than 13 years. He called dismissal of faculty "relatively rare."

Procedures for faculty facing dismissal include the right to request a hearing, with panelists made up of other faculty members. The hearing committee makes a recommendation, with the UA System president to decide on dismissal. An appeal can be made to the UA System trustees board.

Lefler said the UAMS academic senate council has voted to oppose the edited policy and provide recommendations. The UA System responded last week with an update to its earlier draft, but this version also included language that tied "unsatisfactory performance" ratings to dismissal.

At a regularly-scheduled Wednesday meeting, she said Academic Senate members were surprised to learn from the school's top administrator, Stephanie Gardner, that a trustees' vote on the revisions was expected to take place at the Nov. 8-9 meeting.

"That was not what we expected," Lefler said. "We thought we would have time to work on this."

When she was told Monday evening that no vote would take place, Lelfer said the group was "pleased because it gives us some time to really help with revising the policy."

University of Arkansas, Fayetteville professors last week expressed alarm that a possible change was in the works without the majority of faculty members being notified.

"It's pretty disturbing that we found out about this through a media outlet," Janine Parry, a UA-Fayetteville political science professor, said Thursday at a regularly-scheduled meeting of the campus faculty.

After Silverstein's critique was published online, news articles followed in the Arkansas Times and the Chronicle of Higher Education.

Rushing, with UA-Fayetteville, said administrators shared a copy of the draft proposal in late September with the campus' Faculty Senate.

But several UA-Fayetteville faculty members at the Thursday meeting said they were unaware of the details of the proposal, even as Kevin Hall, chairman of the UA-Fayetteville Faculty Senate, said he understood that the proposal was expected to be voted on at the Nov. 8-9 meeting.

Some spoke at the meeting about emailing members of the UA System's board trustees to express concern with the proposal.

Todd Shields, dean of UA-Fayetteville's J. William Fulbright College of Arts and Sciences, said at the meeting that he's the chairman of a search committee to find the university's next law dean.

"The candidates that we already had apply already called, saying, 'What is going on?'" Shields said.

Lefler also spoke about how recruitment would be affected at UAMS. "It would be difficult to recruit and retain the best and brightest faculty," she said.

Silverstein spoke about the importance of tenure in how faculty do their jobs.

"The purpose of tenure is to protect freedom of inquiry in research most importantly but also in teaching and public service, which are the other two pillars of our responsibilities," Silverstein said. "Without tenure, it is too easy to stifle freedom of inquiry, directly or indirectly."