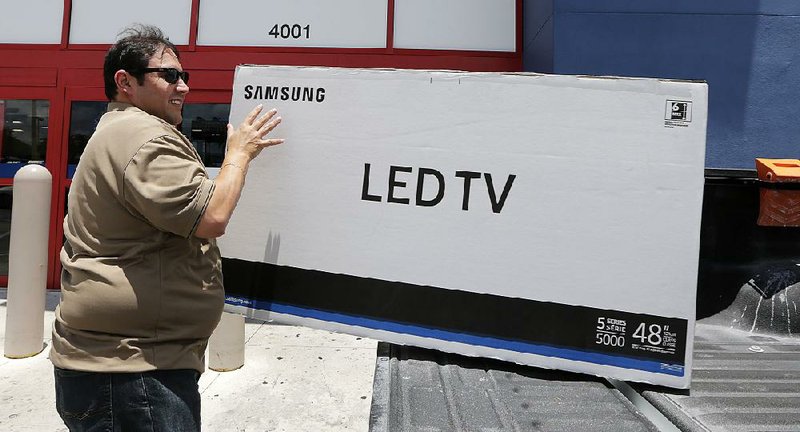 Edward Calixto slides a new television into his pickup in Hialeah, Fla., in May. “Consumer spending looks rock solid,” one economist said this week.

WASHINGTON -- Consumer spending increased in July at the fastest pace in three months, while incomes grew by the largest amount since February, the Commerce Department reported Thursday.

Economists said the report showed that Americans are feeling confident enough to increase their spending, which accounts for 70 percent of the country's economic activity.

"Consumer spending looks rock solid," said Chris Rupkey, chief financial economist at MUFG Union Bank in New York. "The consumer continues to do the heavy lifting when it comes to economic growth as corporations hold back investment plans until they see what tax reform proposals make it through Congress."

Rupkey said he was expecting consumer spending to support overall economic growth of around 2.8 percent in the current July-September quarter.

A key inflation gauge favored by the Federal Reserve posted a tiny 0.1 percent increase in July. Over the past 12 months, it is up just 1.4 percent, still well below the Fed's 2 percent target.

Inflation has been running below the Fed's target for five years and has fallen farther from the 2 percent mark since early this year. Fed Chairman Janet Yellen has blamed the slowdown on temporary factors, but minutes of the Fed's July meeting showed a growing concern that the slowdown in price increases might reflect developments that are more long-lasting.

The Fed raised a key interest rate in March and June of this year and signaled that it expected to increase rates one more time in 2017. The Fed meets later this month. But private economists believe the central bank will hold off on any further changes until they see signs that inflation has resumed rising.

The government reported Wednesday that the overall economy, as measured by the gross domestic product, grew at a solid 3 percent rate in the April-June quarter, the best quarterly growth rate in two years. The government had initially reported GDP growth at a slower 2.6 rate in the second quarter but that figure was revised higher in large part because of a stronger gain in consumer spending.

The report on incomes and spending showed that the saving rate in July slipped to 3.5 percent of after-tax income, the lowest level since it stood at 3.2 percent in December.

The Labor Department said Thursday that more Americans applied for unemployment benefits last week, but the numbers remained low and consistent with a healthy job market.

The number of people filing claims for unemployment aid rose to 236,000, up from 235,000 a week earlier. The less volatile four-week average slipped by 1,250 to 236,750, the lowest since May. The number of Americans collecting unemployment checks fell slightly to 1.94 million, down 9.5 percent from a year ago.

Unemployment claims are a proxy for layoffs. They have come in below 300,000 for 130 straight weeks, the longest such stretch since 1970 when the population was much smaller. The low level suggests that companies are confident enough in the economy to be hanging on to employees.