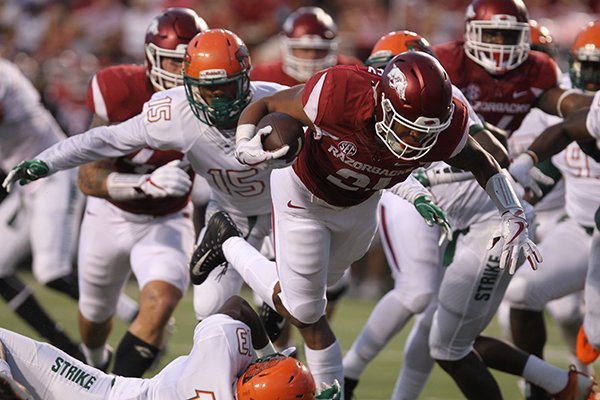 Arkansas running back Devwah Whaley (21) dives into the end zone for a touchdown during the first quarter of a game against Florida A&M on Thursday, Aug. 31, 2017, in Little Rock.

LITTLE ROCK — The Arkansas Razorbacks did not get off to a flashy start, but their suffocating defense made it a moot point Thursday in their season opener.

The Razorbacks (1-0) rode a three-man rushing attack and dominating defense in the debut of coordinator Paul Rhoads to a 49-7 swamping of Florida A&M before a crowd of 36,055 at War Memorial Stadium.

Devwah Whaley, Chase Hayden and David Williams combined for 4 rushing touchdowns and 251 all-purpose yards, and cornerback Henre Toliver returned a fumble 18 yards for a defensive score for the University of Arkansas, Fayetteville.

Hayden ran for 120 yards and a touchdown in his college debut, becoming the first Razorback to hit the 100-yard mark in his first game since Alex Collins ran for 131 yards against Louisiana-Lafayette in 2013.

Whaley added 60 yards and a touchdown, while Williams ran for 23 yards and two scores as Arkansas amassed 236 yards on the ground.

"I think the combination of [Hayden], Devwah and David, we have three really unique players at that position that will kind of present a preparation nightmare for our opponents, I believe," said Arkansas Coach Bret Bielema, who improved to 12-0 in home openers.

Deon Stewart and Cheyenne O'Grady caught touchdown passes for the Razorbacks' other touchdowns.

"This wasn't the result we traveled here for, but I thought our kids played hard," Florida A&M Coach Alex Wood said. "Our offense couldn't generate enough to make this more competitive. We didn't turn the ball over excessively, and we got a turnover, so that was good."

Quarterback Austin Allen completed 14 of 19 passes for 135 yards with 1 touchdown and 1 interception while playing three quarters. Redshirt freshman Cole Kelley made his debut, capping a 10-play drive with a 7-yard scoring pass to O'Grady.

Arkansas limited the Rattlers (1-1) to 96 yards total offense and five first downs in the first half, but they could not keep their visitors from the FCS out of the end zone. The Rattlers played without starting quarterback Ryan Stanley, who was held out with an ankle injury.

Quarterback Vince Jefferies drove Florida A&M into Arkansas territory twice in the second half, and he cashed in on the second drive, a 76-yard march that broke the shutout on Brandon Norwood's 7-yard touchdown in the back of the end zone with 8:23 remaining to cut the lead to 42-7. The Rattlers converted a pair of fourth-down plays on the 15-play march.

Jefferies was 14 of 27 passing for 95 yards with no interceptions. The Rattlers played without starting quarterback Ryan Stanley, who was held out with an ankle injury.

"When the other quarterback wasn't playing, I think our defense made some adjustments, changed their game plan a little bit," Bielema said. "We gave up a minimal amount of points, and they didn't have a lot of big plays.

"We didn't have any glaring misalignments. There was a lot of really good communication out there, and we played a lot of guys at a lot of positions."

The Razorbacks posted three sacks and six tackles for loss and held the Rattlers to 3 of 16 on third-down conversions.

Backup linebacker Gabe Richardson made the biggest defensive play, a hit from behind on receiver Hans Supre that dislodged the ball deep in Florida A&M territory. Toliver scooped up the loose ball and had easy sailing down the Arkansas sideline for an 18-yard score on the third snap of the second half.

Arkansas did suffer a defensive blow when top cornerback Ryan Pulley suffered a strained pectoral muscle late in the first half and did not return. Bielema said the Razorbacks would evaluate Pulley further in Fayetteville.

The Razorbacks got off to a slow start offensively, notching only three first downs on their first two possessions and failing to score. The first series was thwarted on a third-and-1 stuffing of Whaley by linebacker Jakaris Wilson, and the second ended when Allen was pressured, threw into traffic for Stewart and was intercepted by safety Terry Jefferson at the Rattlers 29.

"I think we hit some speed bumps in the first half, which was good to overcome, get those out of our way," Bielema said. "As coaches, we always talk about the improvement between Game One and Game Two, and we're going to need that."

Arkansas rammed its way down the field on its third series, with Whaley and Hayden alternating at tailback. Allen moved the chains with a scramble throw to Austin Cantrell for 11 yards on third and 3, then Hayden had runs of 9 and 13 yards to reach the Florida A&M 11.

After a 6-yard catch by Stewart, Whaley scored Arkansas' first touchdown of the season on a 5-yard run.

The Razorbacks had a three-and-out on their next series as Allen threw wide of La'Michael Pettway on a third-and-3 slant, but they scored touchdowns on their next two possessions.

Allen capped a 48-yard drive with his 16-yard blitz-beater touchdown throw to Stewart. Whaley picked up a blitzing defensive back across the formation, and Allen stepped up in the pocket on the touchdown pass.

Arkansas stayed mostly on the ground on its next sequence, with Whaley, Hayden, Williams and Jordan Jones getting in on the action. Williams had the final three runs, scoring from 4 yards out for the first of his two touchdowns.