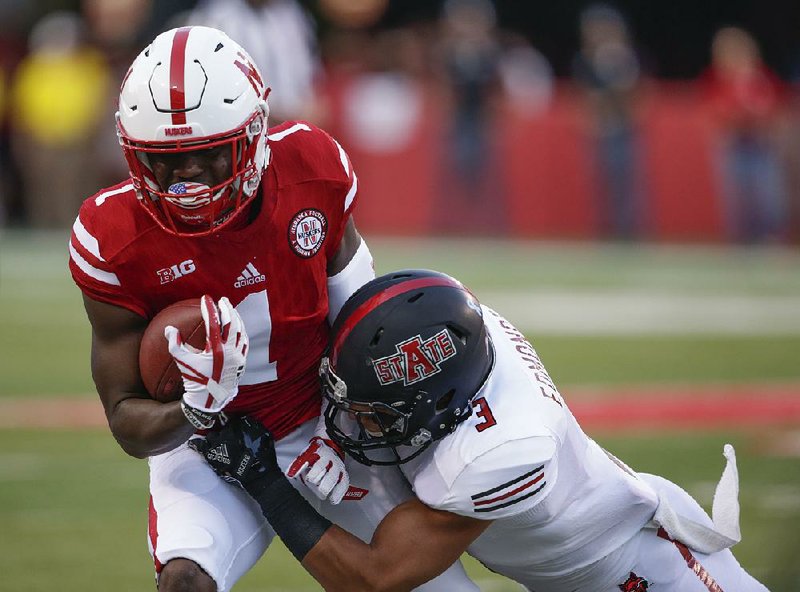 But the ball grazed past the outstretched fingers of wide receiver Kendrick Edwards, a junior transfer from the University of Arkansas, Fayetteville, before bouncing against the wall just past the end zone.

The pass came five plays after senior receiver Chris Murray recovered an onside kick at the Nebraska 44 with 46 seconds left, which came after Hansen threw his third touchdown pass, from 3 yards, to Edwards to bring the Red Wolves (0-1) within a touchdown of tying the Cornhuskers.

The next attempt to Edwards fell incomplete.

“I felt it slip out of my hands,” said Edwards, a junior receiver who 8 catches for 100 yards and 1 touchdown.

So did ASU’s opportunity for its first victory over a Power 5 opponent since defeating Texas A&M 18-14 in 2008, and it possibly stunted the Red Wolves’ chances at becoming the highest-ranked Group of 5 team at the end of the season, which earns an automatic berth in a New Year’s Six bowl.

Hansen, who passed for 415 yards, said he still believes it can be done.

“I think [we’ve] got a good football team,” said Hansen, who set a school record for completions. “We give ourselves a pretty good chance.”

The ASU offense, which didn’t return a single starter on the offensive line, got off to a shaky start.

Troy Elliott and Lanard Bonner each received flags within the first two drives, and Hansen fumbled a high snap that doomed the first drive to a punt.

Sophomore punter Cody Grace’s punt only traveled 21 yards to the ASU 37, but the ASU defense held Nebraska to a field goal that made the game 3-0 with 9:52 left in the first quarter.

The following drives were filled with special teams flare.

Taylor muffed the punt, gathered the ball, curled left and wove through the Nebraska defenders, speeding across a quieting stadium to give ASU its first lead, 7-3, with 5:07 left in the first.

The following play was much louder: Nebraska kick returner JD Spielman made one cut on the following kickoff, then ran straight down the middle of the field for a 99-yard touchdown to regain the lead, 10-7, and bring 90,171 fans to their feet.

It was then that Hansen caught a rhythm. Two 9-yard completions to Dijon Paschal; two short-yardage passes to Justin McInnis; 3 passes under 11 yards to Edwards. Each of them set up the 29-yard vertical touchdown pass to Murray, which confirmed Murray’s camp promises that the offense would be taking more deep shots this season.

“We just got comfortable,” Murray said. “The linemen came together, and we believed in ourselves like a team.”

The nine-play, 87-yard drive, gave ASU a 14-10 lead, but also proved its offense could puncture a Nebraska defense that was in its first season under defensive coordinator Bob Diaco, the 2012 Broyles Award winner while at Notre Dame.

By halftime, Hansen had completed more passes (28) than any previous start except one: a 35-completion game in the 24-19 loss to Louisiana-Lafayette.

On Nebraska’s next drive, Tulane transfer Tanner Lee threw a 44-yard touchdown pass to Stanley Morgan Jr. to make it 17-14.

The Cornhuskers’ offense, which was outgained by ASU 497-463, was led by sophomore running back Tre Bryant, who rushed for 192 yards and a touchdown on 31 carries.

Bryant’s dominance came in the third quarter, when the ASU offense was held to 55 yards on 10 plays.

“Nothing about the third quarter was what we wanted,” ASU Coach Blake Anderson said. 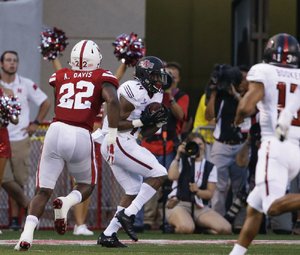 Photo by AP/NATI HARNIK
Arkansas State wide receiver Chris Murray (14) caught a 29-yard touchdown pass from Justice Hansen in the first quarter of the Red Wolves’ 43-36 loss to Nebraska Saturday night in Lincoln, Neb. The Red Wolves drove to the Nebraska 11 in the closing seconds before being turned away.

Arkansas State will play Miami at home on Sept. 9.