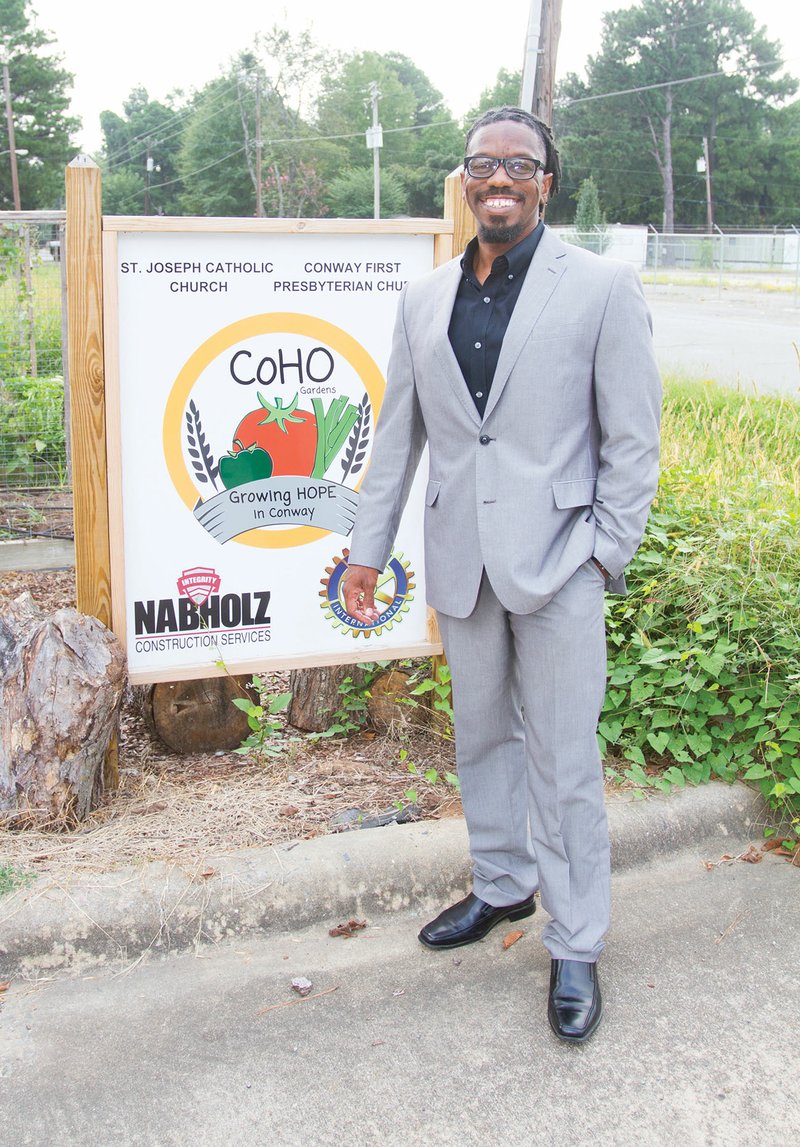 Phillip Fletcher stands in front of the garden at the City of Hope Outreach office in Conway near the Oakwood Village mobile home park. Fletcher founded the nonprofit organization, which has expanded to two other neighborhoods. It includes tutoring, mentoring, a technology center, community gardens, a transitional homeless shelter for men and more. Fletcher said he asks himself and his staff each day, “Are we reflecting God’s will on Earth?”

Phillip Fletcher of Conway planned to be a doctor because science engaged his mind; then he tutored some disadvantaged children, and they engaged his soul.

He switched his major at University of California Riverside from biology to ethnic studies, “which was pretty huge,” he said, laughing.“It was kind of out of left field, but that’s part of college.”

The 44-year-old Fletcher became an ordained minister and started a church in a Conway mobile-home park 10 years ago. That mission led to his founding City of Hope Outreach, a nonprofit organization.

A birthday party/fundraiser for CoHO’s 10-year anniversary is scheduled for 6:30 p.m. Sept. 23 at Peace Lutheran Church in Conway. The cost is $10. “We’ll have cake and food and games for the kids and all that good stuff,” Fletcher said. “It’s going to be a good time and just celebrating what we’ve done and looking forward to what’s coming in the future.”

It was a series of right moves and one wrong turn that got him to this point.

Fletcher was born in Louisville, Kentucky, “a beautiful place,” he said. When he was 10, his father got a promotion as chief financial officer of a paint company, so Fletcher’s parents moved him and his sister to Riverside, California.

He was a science nerd. “Growing up, my parents bought me microscopes and science kits and telescopes,” Fletcher said.

He earned a scholarship to UC Riverside with his eyes on a higher degree.

“I went to school to be a doctor and wanted to become a research doctor,” he said. “The first two years, I was intense on science classes; I just loved it.”

Then his academic adviser asked Fletcher if he would help tutor disadvantaged high school kids in math and science. Fletcher figured he could pick up some extra money, so he agreed.

He said he enjoyed getting to know the students, who were primarily Latino and African-American youth. Then his adviser asked him to be the program coordinator.

“Spending time with the kids and seeing what they were going through and learning about their lives, I said, ‘Man, I want to spend more time with these kids,’” Fletcher said.

So he changed his major to ethnic studies, primarily African-American history.

He said his parents took the news well that their son wasn’t going to be a doctor.

He earned his degree, and he also met his wife, Nicolle, in college. They married in 1997 and moved to Temecula,

California, and he worked with at-risk kids.

It was expensive living in California, so Fletcher said he decided to join the Army. He’d been in ROTC for three years in high school, so he’d gotten a small taste.

“What I was making was just not cutting it, so we were looking for a change. We took a risk,” he said.

This is when his mother balked a little, Fletcher said.

He enlisted and shipped out in August 2000 to basic training at Fort Sill, Oklahoma.

When he made sergeant, he went to officer-candidate school and was commissioned as a combat-arms officer in 2002. He did a tour in 2003 in South Korea as a platoon leader and a tour in Iraq in 2005.

“Korea was hard for a number of reasons,” he said. “Since I was a combat officer and my duty station was combat-related in the case if war broke out between North and South Korea. I couldn’t take family where I was going; I was there by myself. It was hard, but I learned a lot about myself and leading other people and building a team and learning how to get things done. It was good for me to be there by myself and be able to focus on that leadership aspect of my life.”

He became a captain right after a tour in Iraq, and he decided to become a chaplain.

“Growing up, [we attended] an Anglican church. When we moved to California, Mom put us in a Catholic school. I have a pretty good understanding of different religious views. Faith has always been important to my family and obviously important to me,” he said.

Fletcher was required to come off active duty, which he didn’t want to do, to pursue seminary. He resigned his commission and moved his family to Conway, where his in-laws, Julia and Kenneth Kollmyer, lived. He finished his seminary degree online.

“As I was looking for work, every Monday, Wednesday, Friday, I would do street preaching in downtown Conway,” he said. Fletcher would write a little sermon and use a microphone to broadcast it.

He got a job as Pulaski County voter-registration supervisor, where he worked from late 2007 to 2009, and he took a wrong turn on the way home one day.

“As I was coming home from work in September of 2007, God led me to make a right on Robins [Street] and go to the trailer park there and start what would become CoHO,” he said. “I said, ‘This is where I’m supposed to preach the Gospel.’”

Nicolle Fletcher said she thought her husband had “lost it” when he came home and told her about his idea.

Phillip Fletcher said that as he started the ministry in the mobile home park, Nicolle’s father was retiring and closing his church and had chairs and a sound system for them.

“We got all the stuff we needed and went out there, and nobody showed up,” Fletcher recalled with a chuckle. “We just set up the stuff, sang some songs — I play the guitar — opened up the Bible and said the message. So we kept coming every Sunday,” he said.

“That first two years was kind of like, ‘What am I doing?’ I go out there on Sundays, and we’d have a little message. Me, Nicolle and our three kids would set up some tables and chairs. “I said, ‘Beside this, what am I supposed to be doing here?’”

Fletcher even spent the night in a tent at the park to let people know he was committed.

“It became clearer. OK, how can I help the everyday things they’re going through?”

In 2009, he formed a board and started City of Hope Outreach. The nonprofit organization has a staff of 11. Programs include CoHO Academy, where children who live in Oakwood Village receive tutoring and attend Bible studies.

In 2012, the outreach expanded to Brookside Mobile Village in Conway, which is predominantly a Hispanic neighborhood. CoHO has an education facility there, too. The third neighborhood it serves is South Ash near downtown Conway. Students at University of Central Arkansas, Hendrix College and Conway High School help tutor children in the neighborhoods.

CoHO installed a playground in Oakwood Village and started gardens in each of the three communities, as well as one in partnership with First Presbyterian Church in Conway.

In 2013, the organization started Hope Home, a transitional shelter for homeless men.

“This is an effort where all of us are involved. We’re not doing things for people — we’re doing things with people,” he said.

Fletcher said his inspiration within CoHO is Ambra McPeters, 32, who lives in the Oakwood Village mobile-home park.

“She started out as one of the volunteers and helped out because her daughter was coming to our CoHO Academy, and she just went all in,” he said.

McPeters joined CoHO’s staff as volunteer director and her husband, Greg, is in charge of a jobs program for residents of the communities.

“As a community member, speaking first, because that’s how I got to know Phillip, it’s been amazing having an organization within the community that understands the struggles and what we go through,” she said. “There were a couple of times that my family would have been homeless, but CoHO was here to help.”

McPeters was a nurse, but she had health problems and two high-risk pregnancies and had to quit.

“We went from having the house and the fenced-in yard that everyone strives to have to living out here,” she said.

At a community meeting, a resident of Oakwood Village said people view them as “trailer trash.”

McPeters said Fletcher “quickly stepped in and said no, and reaffirmed her dignity as a person. He sees we are just people.”

“Oakwood, Brookside and South Ash — these people are my friends,” Fletcher said. “We’ve had birthday parties together, we’ve just sat and eaten meals together, we’ve had funerals. They work hard, they’re trying to do the best they can with what they’ve got, and sometimes they feel their hands are tied.

“The men and women in poverty, they’re human beings like everyone else. They have hopes and dreams like everybody else; they shouldn’t be stereotyped; nobody likes to be stereotyped. I am consistently asking people to watch themselves in the words they use to talk about poor people,” he said.

“They’re not all lazy; they’re not all drug-addicted,” Fletcher said. “The words we use can communicate this is not an individual, this is not a human being, this is just an object, this is just a statistic. We have to use words that continually humanize somebody, words that build somebody up, encourage somebody and ultimately communicate that I love you as I want to be loved.

“These are the men, women and children I want to be around on a daily basis. They bless me more often than I think I ever bless them,” he said.

“In the next 10 years, we want to pursue what’s called Hope Village,” Fletcher said. He said the project — building small structures for the homeless to live in — has been in the works for two years, and he is pursuing a deal to get land for the neighborhood.

He also has a goal to open up a shelter for homeless women.

Reflecting on the first 10 years amazes him.

“I’m essentially seeking to be a person who wants to influence people to consider the needs of the poor as they consider their own needs. What I think we can become is an utterly compassionate people. … How can I use what I have to help a person who is in a worse-off situation than I have?

“I look at all those things — the Hope Home and CoHO

Academy and the gardens — all of these things are ideas that took a whole lot of patience and hard work and creativity from a variety of people through the year. I’m just the guy who gets all the pieces together and says, OK, let’s make this happen.”

Fletcher does not regret his choices. He isn’t a doctor, but he is helping others.

“This is what gives me energy; it’s what propels me and keeps me going throughout the day. I can’t imagine doing anything else,” he said.