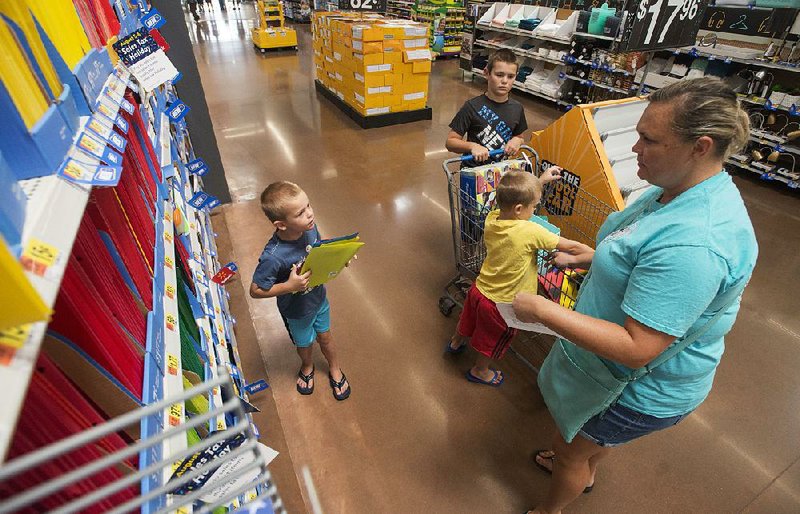 Jenny Berry of Rogers shops for school supplies with her sons Cole, 10, and 6-year-old twins Taylor and Brayden in August at the Wal-Mart Supercenter in Rogers.The retail giant is revising its product delivery requirements to keep its shelves full.

What was supposed to be a four-day window for deliveries took more like 10 days, according to McLay. Products trickled through in an inexact way. Some arrived early. Others were late. All of it led to inefficiencies throughout the system.

"That undermines our ability to actually plan and control the supply chain to make sure our suppliers' products are actually making it through to the shelf," McLay said.

Wal-Mart believes it can solve the problem by reducing the delivery window with a program called "on time, in full" -- or OTIF -- which has been discussed for some time but finally went into effect in August.

Under the new requirements, full truckload suppliers of food and consumable products must have shipments destined for Wal-Mart shelves delivered on the scheduled arrival date -- not early or late -- at a minimum level of 75 percent of the time. There is a two-day window for general merchandise. In February, Wal-Mart will increase the required compliance rate to 95 percent, eclipsing the previous delivery guidelines of 90 percent over a four-day window.

Missing the threshold will be costly for suppliers, who will be fined 3 percent of the value of products that don't hit the target date. Suppliers are being evaluated monthly and underperforming companies will first feel the impact of the new policy when they're invoiced later this month whether they've been prepared or not.

"Quite honestly, there's going to be some percentage of the supplier base -- whether it's 10 percent or 20 percent or 30 percent -- that when the actual invoices for failing to meet the metrics arrive in their in-box they're going to be like, 'What is this?,'" said Colby Beland, vice president of sales and marketing at logistics firm CaseStack.

McLay, who addressed suppliers during a Greater Bentonville Area Chamber of Commerce event Wednesday, said Wal-Mart has made the changes in efforts to improve product availability. But she stressed Wal-Mart isn't trying to be in the "business of fining suppliers" and believes the new requirements are "fair and reasonable."

The company isn't the first to adopt tighter guidelines. Target did last year. But Wal-Mart, which is competing with online giant Amazon.com, sees the changes as a necessity. McLay said the on-time, in-full program aligns with its strategies of having low prices, keeping costs low and providing seamless shopping for customers.

McLay said Wal-Mart is holding itself accountable to the 95 percent standard internally and has worked extensively to improve its own procedures regarding product flow, inventory management and on-shelf availability at stores. Success could lead to an additional $1 billion in revenue, according to Wal-Mart's presentation to suppliers earlier this year.

McLay said the company can't accomplish those goals without cooperation from suppliers.

Suppliers have had time to prepare for the new guidelines. Wal-Mart first mentioned on-time, in-full standards 18 months ago and made a formal announcement to suppliers about its plans in February. They've continued to highlight it since.

The company has developed a scoring system that tracks product flow and identifies trouble areas. The scorecard also accounts for errors traced back to Wal-Mart, which won't affect a supplier's score.

Carol Spieckerman, a retail consultant and president of Spieckerman Retail, said its important for Wal-Mart suppliers to be aware of the competitive dynamics at work in the competition with Amazon.

"Through its enforcement of OTIF, Wal-Mart is demonstrating its determination to win the new fulfillment and logistics battle, one that still relies heavily on its supplier partners," Spieckerman said. "Wal-Mart can't afford any laxity at this point and OTIF sends a clear message in that regard."

But not every supplier has been listening, according to CaseStack's Beland.

His company held a workshop Aug. 1 for suppliers in conjunction with Wal-Mart to discuss on-time, in-full standards. The workshop was held the first day suppliers were being held accountable under the new guidelines, but Beland said several suppliers raised their hands and asked what OTIF stood for.

He believes Wal-Mart's large suppliers -- companies like Unilever, Proctor & Gamble, and Johnson & Johnson -- have plans in place to meet the new standards. But many smaller suppliers are not prepared and could face challenges, especially with a scoring period that has shifted from 13 weeks under the old system to one month.

"I don't think a lot of the suppliers understand the impact of OTIF," Beland said. "The penalty is the same. It's still 3 percent the cost of goods. But the window you're being measured is what changes. ... In a 13-week period you still had 12 more weeks to recover from that one bad week. If you have one week now there's no way to get to 95 percent."

McLay acknowledged Wal-Mart and its vast network of suppliers are nowhere near where they need to be to reach the 95 percent threshold at this point. But she believes the work over the past few months in preparation for the August introduction has left the retailer "significantly better than what we were."

McLay said setting the bar at 95 percent is high, but is confident it can be met through "good business planning." She said the objectives must be accomplished because customers are holding Wal-Mart to an even higher standard.

"They don't give us a 95 percent threshold," McLay said. "They expect when they get to the store that we are fully available. And if we're not, they penalize us."