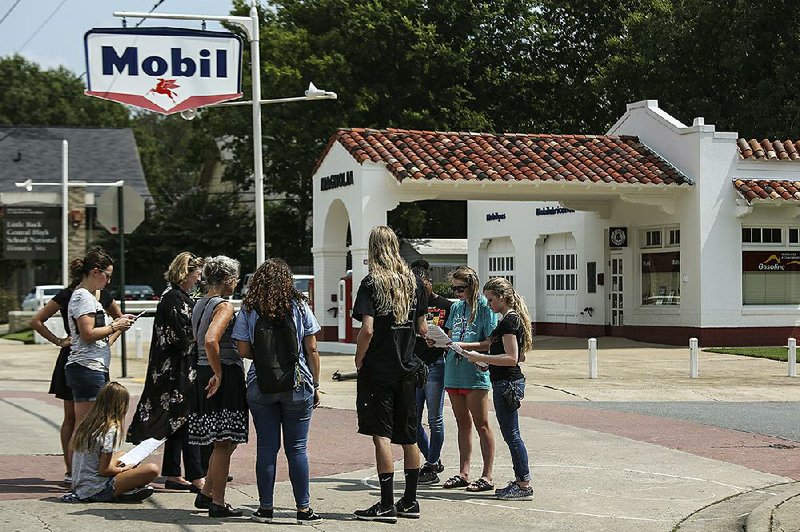 Visitors read off a script Monday during a walking tour that re-creates the first day in 1957 when the Little Rock Nine attempted to attend classes at Little Rock Central High School.

The famous path Elizabeth Eckford took from the northeast corner of the Little Rock Central High School lawn to the bus bench south of the school 60 years ago became an interactive experience for school visitors on a sweltering Monday afternoon.

The interactive experience came courtesy of the Little Rock Central High School Memory Project, an oral history program run by a collection of students, teachers and other community sponsors.

Now run by students who weren't born until more than four decades after the Central High crisis, the Memory Project is trying to preserve the history of Eckford's walk in a new way: through an app that allows listeners to hear her story as they walk her very same steps outside of the school.

Eckford, one of the nine students who integrated Central High School in 1957, was spat on and tormented as she attempted to attend her first day of school Sept. 4 that year.

On Monday, current Central High students showed the public a prototype of the experience through a walk and a reading of the script that will be featured on the app. Visitors took turns reading each line, detailing the Little Rock Nine's optimism for the first day of school and the dramatic turn of events that followed.

"It's impressive," said John Coffin, who visited the site Monday. It's easier to get a sense of what Eckford's walk was like, he said.

Eckford had made herself a new dress for the occasion. She was so excited, she couldn't sleep the night before. She, and others, thought the presence of the Arkansas National Guard would make her safer. Until, as she approached Central High from the northeast corner of the lawn, the guardsmen turned her away. She wouldn't go to school that day.

Eckford walked south, alone, as the crowd screamed, spat and harassed her. Eventually, all she wanted was to get to the bus bench across the street from the school's southeast corner, where a white woman helped her onto a bus. Eckford's dress was soaked in spit, and she would walk that path over and over again, years later, to deal with the stress of the event.

Students working on the Memory Project got involved as a way of learning more about their high school.

"The school doesn't focus much on its history, which is part of why I joined this project," said Julia Greer, a senior.

Danica Kilton, a freshman whose father is the new chief of interpretation for the Little Rock Central High School National Historic Site, said she thought joining the memory project and learning more about her high school would enhance her experience there.

Students have been researching the project since January 2016, said George West, a former civics teacher at Central who still serves as a sponsor for the Memory Project through his new job at the Butler Center for Arkansas Studies.

West said the Memory Project doesn't have a firm date for the launch of its app for Eckford's walk. A student developed an app last semester with the help of the Arkansas Innovation Hub, but it's not available for all devices yet.

But the launch of the app may not be the end of the project, either, said David Kilton, chief of interpretation for the Little Rock Central High School National Historic Site. Eventually, the National Park Service would like to expand on the students' work and add more perspectives from people who witnessed Eckford's walk and from people who witnessed other events and harassment within the school -- something Greer said she wanted to see, too.

Visitors on Monday said they enjoyed the experience of walking in Eckford's footsteps, one person calling it "powerful."

Kareem Wilkins, 34, went with his girlfriend and family from Dallas on their 50-state tour of the U.S. They picked Monday's event because of the educational opportunity it provided.

Many people don't know about the Central High Crisis, Wilkins said, or the destruction of Black Wall Street during the Tulsa race riot, where he recently visited a historic marker. Racial tensions haven't disappeared, and the stories of the past still resonate today, he said, noting the violence in Charlottesville, Va., last month and other recent news. 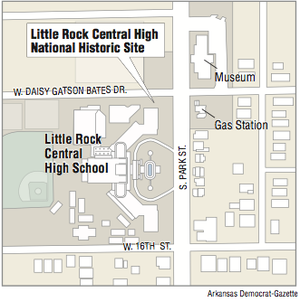 "That's why it's important to talk about this today," he said.