Amazon to build 2nd HQ for $5B; Memphis will 'absolutely make a bid,' mayor says 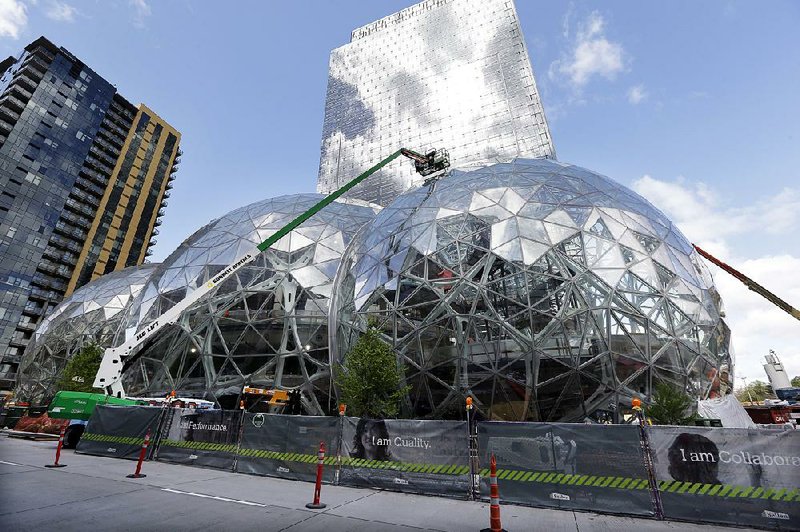 Construction continued earlier this year on three large, glass-covered domes as part of an expansion of the Amazon.com campus in downtown Seattle. Amazon said Thursday that it wants to build another headquarters in North America.

SEATTLE -- Amazon said Thursday that it plans to spend more than $5 billion to build a second headquarters in North America to house as many as 50,000 employees.

The tech giant plans to stay in its Seattle headquarters, and the new space will be "a full equal" of its current home, said founder and Chief Executive Officer Jeff Bezos.

Amazon's announcement highlights how fast the company is expanding, and is likely to create a scramble among cities and states vying to make the short list. They have a little more than a month to apply through a special website, and the company said it will make a final decision next year.

Shortly after Amazon's proclamation, Pittsburgh Mayor Bill Peduto announced that he's "on it." Jim Strickland, the mayor of Memphis, said his city will "absolutely make a bid." Philadelphia Mayor Jim Kenney said his East Coast metropolis would be a "prime" location for Amazon. In Chicago, Mayor Rahm Emanuel has already spoken with Bezos to make a pitch for locating in the city, according to a report from Crain's Chicago Business.

Amazon didn't hint about where it might land, but its requirements could rule out some places: It wants to be near a metropolitan area with more than 1 million people; be able to attract top technical talent; be within 45 minutes of an international airport; have direct access to mass transit; and wants to be able to expand that headquarters to as much as 8 million square feet in the next decade. That's about the same size as its home in Seattle.

Amazon said its search is open to any metropolitan area in North America that meets the parameters -- the city itself doesn't necessarily have to be 1 million people -- but declined to say how open it was to going outside the United States.

"We want to find a city that is excited to work with us and where our customers, employees, and the community can all benefit," the company said on its search website, about why it was choosing its second headquarters through a public process.

Bezos has elicited public feedback for major decisions before: In June, just before Amazon announced its plan to buy organic grocer Whole Foods, the billionaire took to Twitter seeking ideas for a philanthropic strategy to give away some of his fortune. And tech companies have been known to set places in competition with one another: In vying to land Google's ultrafast broadband network, many cities used stunts and gimmickry to get the company's attention. Topeka even informally renamed itself "Google, Kansas."

In just the past month, Amazon announced plans to build three new warehouses that pack and ship packages in New York, Ohio and Oregon. And it recently paid close to $14 billion for Whole Foods and its more than 465 stores. The company plans to hire 100,000 people by the middle of next year, adding to its current worldwide staff of more than 380,000.

Amazon's Seattle campus takes up 8.1 million square feet, has 33 buildings and 24 restaurants and is home to more than 40,000 employees. At the second headquarters, Amazon said it will hire up to 50,000 new full-time employees over the next 15 years who would have an average pay of more than $100,000 a year.

Amazon's website about the search lauds the benefits it can bring to a community. And Amazon's arrival could transform an area: Until 10 years ago, the neighborhood near Seattle's campus just north of downtown was dotted with auto-parts stores and low-rent apartments. Now the area is a booming pocket of high-rise office complexes, sleek apartment buildings and tony restaurants.

Amazon's rise has not been without local critics, who say the influx of mostly well-heeled tech workers has caused housing prices to skyrocket, clogged the streets with traffic and changed the city for the worse. The Seattle Times reported Thursday that the median price for a house in August in Seattle was $730,000, up almost 17 percent in a year.

The public search for a new headquarters will likely spark a bidding war among states and cities eager for a piece of one of America's fastest-growing companies.

An eight-page request for proposals that Amazon posted online Thursday said incentives offered to offset building and operating costs "will be significant factors in the decision-making process."

Speed appears to be a priority. The company asked interested municipalities to offer their best guess at the timeline Amazon could expect for permitting and other considerations to be completed as part of the proposals it is requesting by Oct. 19.

Amazon expects to announce a decision next year and start work on the first phase of a new campus by 2019.

"We encourage cities to think big and be creative," the company said.

Packages of goodies given to companies that promise jobs have come a long way since Chicago snagged formerly Seattle-based Boeing's headquarters in 2001 with tax breaks worth up to $60 million.

When General Electric agreed to move its headquarters from suburban Connecticut to Boston last year, the pot was sweetened by up to $145 million in incentives.

And subsidies to keep or expand manufacturing work in states have added up to billions in tax breaks for the likes of aluminum-maker Alcoa, General Motors, Intel, and, in Washington, the package offered to Boeing in exchange for a commitment to build the 777X airliner in the state.

Amazon has usually kept under the radar when approaching communities where it wants to build its new warehouses, encouraging officials to keep the discussions quiet and even using code names on public documents to avoid detection. That approach has helped Amazon secure more than $700 million in tax breaks from states and cities since 2000, mostly to expand its warehouse and delivery operations, according to Good Jobs First, a nonprofit group that tracks business tax breaks.

The economic impact for the winning city for a second headquarters for Amazon would be significant. The company said its investments in hometown Seattle from 2010 through 2016 resulted in an additional $38 billion to the city's economy.

Information for the article was contributed by Joseph Pisani, Michelle Chapman and Chris Grygiel of The Associated Press; by Matt Day of the Seattle Times; and by Spencer Soper and Kim Bhasin of Bloomberg News.

Print Headline: Amazon to build 2nd HQ for $5B