No plans for metal detectors yet at UA stadium 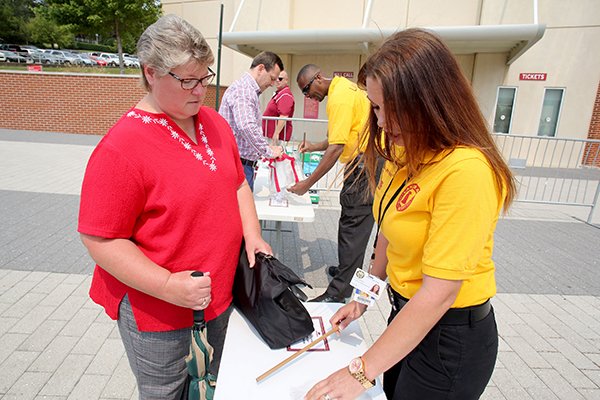 FAYETTEVILLE — After earlier seeking bids for metal detectors, the University of Arkansas, Fayetteville does not include them in the school’s “current plan” for security at Donald W. Reynolds Razorback Stadium, a UA spokesman said Wednesday.

But while metal detectors will not be part of the fan experience as the first Razorback home football game kicks off Saturday, no decision has been made about possibly adding the technology for future seasons. Guns are prohibited at the stadium, which is hosting six games this fall.

State lawmakers in March expanded concealed carry of guns to include the grounds of public colleges and universities, among other areas. State police have 120 days from Sept. 1, the law’s effective date, to set up required training. No permits allowing for expanded concealed carry — including on the grounds of public universities — will be issued until the training program is complete.

Legislators added an exemption for collegiate athletic event sites, so long as security plans submitted under the law receive state police approval. If requirements are met for such “firearm-sensitive areas,” the law allows for a prohibition on guns.

“While not obligated to provide information related to the University’s security plans, we can share that metal detectors are not a part of the current plan,” UA spokesman Mark Rushing said in an email.

Rushing said UA’s athletic department “will continue to evaluate all facts and circumstances that may impact this decision to determine whether or not the addition of metal detectors at future athletic events is appropriate.”

The university’s web site states that concealed guns will be prohibited from athletic events “with approved security plans.”

At the time, Trainor said the decision to solicit bids was “not directly related to concealed carry in Arkansas.”

Schools which add metal detectors may spend hundreds of thousands of dollars.

Kansas State University this year paid about $382,000 for 63 walk-through metal detectors and 20 hand-held wands from Ceia USA, with the cost also covering 73 battery units and some other associated equipment, said Casey Scott, an executive associate athletics director with Kansas State.

State law in Kansas that took effect this year requires metal detectors at sites if a school wishes to ban firearms. The Arkansas law lists three specific security measures, including “use of a magnetometer or other metal-detecting device designed to detect weapons,” as well as security personnel and barricades. The law uses the word “or” before a fourth listed item: “other measures or devices designed to protect the public from a security threat.”

Arkansas State University spokesman Bill Smith said in an email that metal detectors will not be used at football games this season at the school’s Centennial Bank Stadium. He added that a decision will be made later about using metal detectors at home basketball games.

Dan Donovan, a security expert, described a need for additional staffing when metal detectors are added.

Beyond technology, “there’s a lot more cost that goes into it,” said Donovan, vice president of security and technology consulting for New York-based Guidepost Solutions. He said more workers typically are needed to staff additional entrance lines that help reduce the wait time for fans.

Donovan said that while changes to state law are driving changes to some stadiums, security recommendations are also leading to a greater adoption of metal detectors, with the trend beginning to grow over the last four to six years. He said the major professional sports leagues for football, basketball and baseball now all require metal detectors at game sites.

More universities are “moving in that direction,” Donovan said, though he added that “the number of university stadiums that have gone to true walk-through metal detectors is a pretty low number still.”

Print Headline: No plans for metal detectors yet at UA