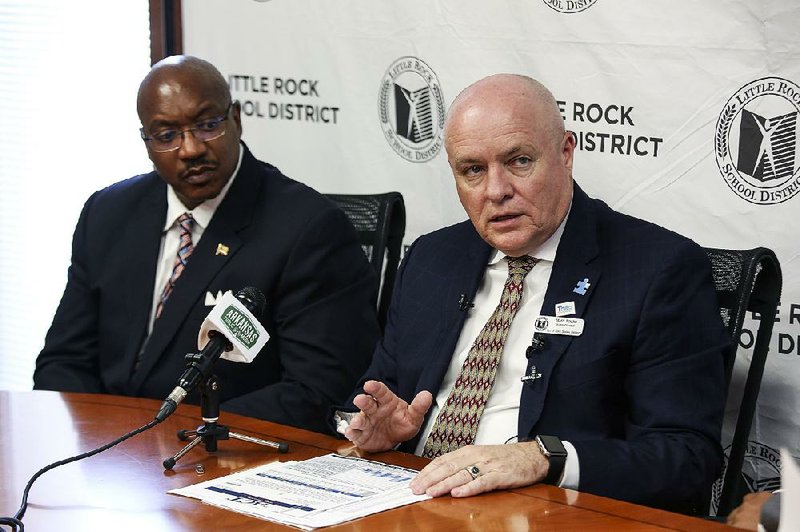 Little Rock School District Superintendent Mike Poore talks to the media about a settlement between the school system and parents. Deputy Superintendent Marvin Burton is at left.

U.S. District Judge D. Price Marshall Jr. on Monday dismissed the Doe v. Key lawsuit -- which alleged racial inequities in access to quality school buildings and academic programs -- after the parties informed the court Friday that they had reached an agreement requiring the district to meet 20 commitments in exchange for the plaintiffs dropping their lawsuit.

The 2-year-old case was scheduled to go to trial Wednesday. The defendant Key in the lawsuit's title is state Education Commissioner Johnny Key. The district has been under state control since 2015.

One of the school district's pledges is to create new high school attendance zones "based on a written, race-neutral rationale" by 2020. The deadline aligns with the anticipated opening of a new $55 million high school in southwest Little Rock that will rival Central High in enrollment, replace two existing schools and draw hundreds of students from a third, Poore said.

As part of the attendance zone redo, officials will look at the entire district but plan to mostly examine what parts of the city feed into the new high school, Poore said at a news conference.

"We're going to make it a community process -- I've always done that with boundaries -- but the realistic thing is that there will probably be some people that don't like whatever boundary adjustment we come forward with," Poore said, later adding: "I don't anticipate having major adjustments to the Central [High] boundary."

The 60th anniversary of the 1957 desegregation of Central High by nine black students will be commemorated this month in a series of events that include a concert by Mavis Staples, panel discussions, and remarks by former President Bill Clinton at the school on Sept. 25.

The school, one of the state's largest, enrolls students from west of Interstate 430 and east of Interstate 30. Its attendance zone is the only one of the district's four that is not contiguous -- a segment of west Little Rock is included in the zone despite not directly connecting to it.

The new southwest Little Rock high school will replace J.A. Fair and McClellan high schools. The two schools combined had an enrollment of 1,707 last school year, and 3.8 percent of those students were white, according to state data.

State Rep. John Walker, a Little Rock civil-rights attorney who represented the plaintiffs, did not respond to a message left at his office. Joy Springer, a former School Board member who works for Walker's firm, initially said she would return a reporter's call but did not.

Surrounded by attorneys, the school district's deputy superintendent and its chief financial officer, Poore held a roughly 23-minute news conference in his office on the settlement.

"The judge in this case asked us to work in earnest with the plaintiffs, with opposing attorneys, to try to create a settlement that is beneficial to all, and I think that's exactly what happened in this case," Poore said, also adding: "I don't believe there is anything the Little Rock School District has done ... that was discriminatory towards African-American students."

As part of the agreement, the Little Rock district will pay $100,000 to cover the plaintiffs' attorney fees and costs to the black families.

The district promised no new construction or expansion projects until the new high school is completed and the existing Cloverdale Middle School is relocated to what is now McClellan High, which will be renovated, Poore said.

The moratorium on expansions does not include the expected addition of eighth-grade students at Pinnacle View Middle School beginning in 2018-19, because that space has already been built, Poore said.

Pinnacle View's construction before that of the new southwest high school was a key point of contention in the Doe lawsuit -- so called because the students who brought the action were initially anonymous.

Attorneys in filings alleged that the district moved forward on Pinnacle View in an "intentional effort to privilege, recruit and retain" the district's white population, despite previously acknowledging that Cloverdale was dilapidated and the new high school was a top priority.

The settlement spells out specific fixes to three campuses -- Cloverdale, Henderson Middle School and McClellan -- such as installing new lighting, cleaning graffiti, replacing ceiling tiles, and repairing window air-conditioning units. The district must also ensure that no functioning bathroom in a school goes more than 24 hours without soap.