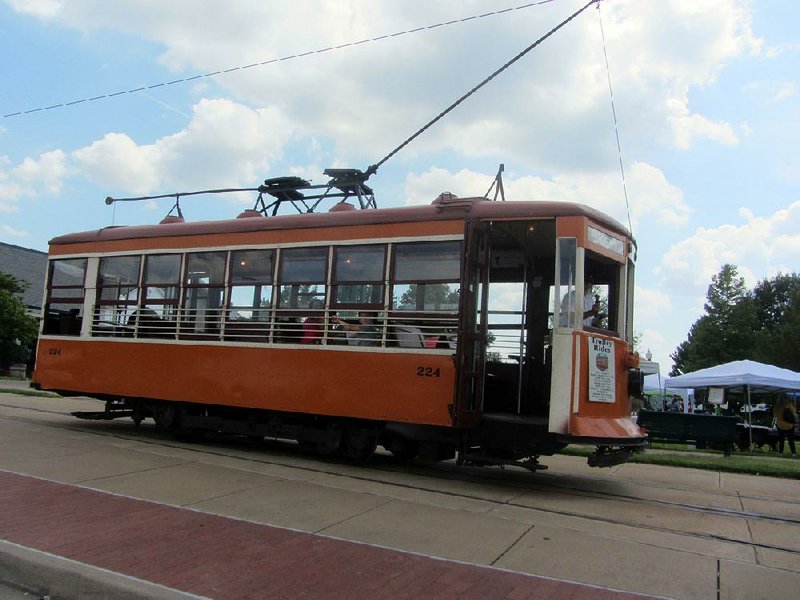 Visitors to Fort Smith can ride on a vintage streetcar from the local trolley museum.

FORT SMITH -- Not every property on the National Register of Historic Places always stays in the same place. That's true of Birney Safety Streetcar No. 224, which offers Fort Smith visitors a 15-minute ride daily from May 1 through Oct. 31 and on weekends the rest of the year.

Built in 1926, the orange trolley has been carrying tourists since 1991 on a route of less than a mile. It's a prime attraction of the Fort Smith Trolley Museum, a name that's a bit of a misnomer, given that its other three National Register prizes are railroad locomotives. They're on stationary exhibit at the museum, which is run by volunteer "foamers" -- the affectionate nickname for choo-choo devotees who get excited about any vehicle moving on tracks.

Passengers board the trolley near the museum at a platform backed by a nostalgia-evoking mural that shows what local streetcars might have looked like a century ago. Birney No. 224 went into service for Fort Smith residents in 1926. The system was abandoned in 1933 as the Great Depression took hold. It later served as a diner in Ashdown before being restored here.

The most photogenic of the museum's three National Register locomotives, recently refurbished and parked outdoors, is Frisco 4003. It's a standard-gauge steam engine built in 1919 and operated for many years by the St. Louis-San Francisco Railway. It looks ready to start chugging along, although it is not operational.

Less sleek in appearance are the other two National Register engines. U.S. Air Force Locomotive No. 1246 was built in 1953 as a diesel-electric switch vehicle. It operated at Grissom Air Force Base in Louisiana. Maumelle Ordnance Works Locomotive 1 is a gasoline-powered two-axle engine from 1942, built for service at the U.S. War Department's facility in Maumelle.

The museum's interior is a jumble of rail cars and work equipment, trolleys and buses. Outside displays include more trolleys, plus train cabooses along with passenger cars and boxcars. Volunteers on duty are knowledgeable about the vehicles and happy to talk about them.

Still Arkansas' second most populous city, Fort Smith is working to vary and expand its visitor attractions. Outdoor art is one of the newer themes, with a fresh set of murals having been completed by eight artists during the Live for the Unexpected Mural Festival that ended earlier this week.

The city's past as a 19th-century frontier town is related at Fort Smith National Historic Site. The federal landmark preserves what is left of two military posts, two jails and the erstwhile courthouse. Exhibits tell how lawmen based in Fort Smith helped keep the peace in Indian Territory (Oklahoma) just to the west during the second half of the 19th century.

Most famous of the personalities from this era is Isaac C. Parker, known as "the hanging judge." During his time on the federal bench from 1875 to 1896, 79 men were executed for capital crimes. A replica of the gallows where hangings took place stands on the grounds of the former military post. An information panel notes that during the same turbulent period, at least 70 deputy marshals died in the line of duty.

The frontier era's lawmen will be honored at the U.S. Marshals Museum, tentatively scheduled to open in September 2019 in downtown Fort Smith. That would coincide with the 230th anniversary of the marshals service's founding.