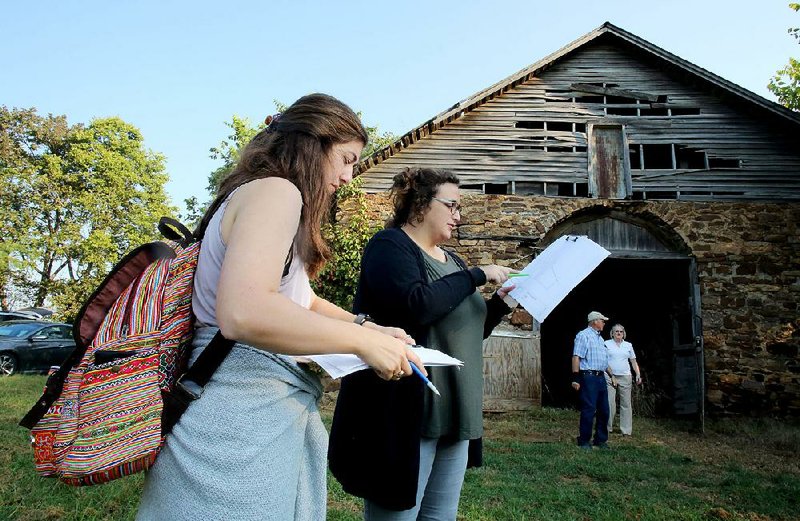 Lauren Lambert and Katie Murphy, graduate students at the University of Louisiana at Lafayette, review architectural documents Friday in front of the horse barn at Fitzgerald Station in Springdale. Students from the university will come up with plans for the site, which once was a stagecoach stop on the Butterfield Overland Express mail route. dav got

SPRINGDALE -- Architecture students from Louisiana will come up with plans to redesign a historic Arkansas stagecoach stop.

Twenty-three graduate students from the University of Louisiana at Lafayette will spend the fall semester working on adaptive reuse plans for Fitzgerald Station in Springdale, which was once a stop on the Butterfield Overland Express mail route from Tipton, Mo., to San Francisco.

Adaptive reuse refers to the renovation of pre-existing structures for new purposes.

Sixteen of the Louisiana students and their three professors toured the property Friday.

"We all were excited about the possibility of working someplace we haven't worked before," said Kari Smith, associate professor of architecture at the University of Louisiana at Lafayette. "We don't have stone in Louisiana so we don't have stone buildings."

Smith was referring to the stone walls of the barn, which preservationists consider the most important structure on the property because it existed when the stagecoach was in operation from 1858-61.

Frank Norris, a historian with the National Park Service in Santa Fe, N.M., said there are only about five original structures that remain along the Butterfield route from Missouri to California.

"There might be five of them left that are still standing in anything more than just a wall or something like that," he said. "The vast majority of these stations do not exist in any way, shape or form. ... The beauty of Fitzgerald Station and the barn is it's a very stout structure. To the best of my knowledge that is the only standing barn along the Butterfield route. It's remarkable that the barn is there."

The barn was built by crews working for John Butterfield, who operated the stagecoach route, taking mail and passengers to California.

The Fitzgerald farmstead's history dates back to before Arkansas became a state in 1836. An inn and tavern on the property was a way station for stagecoaches, the Trail of Tears and Civil War soldiers.

The previous owners, who tried to preserve the buildings, deeded the property back to Arvest Bank in April.

The bank put the property up for sale briefly, then took it off the market after preservationists expressed concern that new owners might tear the barn down to make way for commercial development along Old Wire Road, which is also Arkansas 265.

Allyn Lord, director of the Shiloh Museum of Ozark History in Springdale, told the students and professors Friday that the bank will likely put the property back up for sale at some point, but in the meantime having the students come up with ideas about how best to use the property is a welcome development.

"For us, the timing of interest from you all is really good fortune," she said.

Lord said generations of area residents probably have driven past the barn, never noticing it or realizing its historical significance.

On Friday, the students took measurements and jotted down notes as they wandered the grounds.

"This is probably the only time you're going to be here before your projects are due in December," Michael McClure told the students.

McClure, a native of Pryor, Okla., is an architecture professor and associate dean of the College of the Arts at the University of Louisiana at Lafayette. He said the Fitzgerald Station fits perfectly with the design studio's goals for adaptive reuse of historic properties.

Smith said the students will come back to Arkansas to present their designs to stakeholders in December.

Just having the designs could be helpful for getting grants, McClure said.

"You have to have something to show people if you're asking for money," he said.

While the goal is to make the property economically viable, the students won't go so far as to include a Starbucks in their designs.

Because it's the least historical building on the property, the 1971 house could serve as bathrooms and an information center, said Smith.

The students weren't allowed in the 1870s inn because of the condition of the building, so they'll just do designs of that building's exterior, she said.

Most of the design emphasis will be on the barn, said Smith. The students were split up into groups to concentrate on specific buildings or the site as a whole.

Loren Hoffpauir, a student from Lafayette, La., said she envisioned a new building on the site.

"I think adding an addition to what's existing is what we're going to do," she said of her group. "It's just a matter of keeping the existing integrity along with another structure."

Lauren Lambert, a student from Mandeville, La., said she was excited about the project.

"It's interesting to have some existing heritage and culture from the area and design off of that," she said.

The barn was 125 feet south of the Fitzgerald Station on the old Military Road from Springfield, Mo., to Fort Smith. The original inn was replaced in the 1870s by the existing building.

The Butterfield Overland Express was a major factor in the settlement and development of Arkansas and the American West before the Civil War, according to The Encyclopedia of Arkansas History & Culture.

Branches of the Butterfield route left from Tipton, Mo., and Memphis, heading west. They converged in Fort Smith before making the rest of the journey to San Francisco.

Another Arkansas building was part of the Butterfield Overland Express. Potts Inn in Pottsville was a station along the stagecoach route between Memphis and Fort Smith. Norris said historians don't know as much about the Memphis to Fort Smith section.

East Arkansas often flooded, necessitating travel by various routes including rail, boat and different trails. So, one established stagecoach route didn't exist all the way from Memphis to Fort Smith.

Instead, Butterfield worked with existing carriers -- and the existing transportation infrastructure -- to cobble together a workable route from Memphis to Fort Smith, according to a National Park Service study. The route included a ferry over the Mississippi River, a 40-mile railroad segment from Hopefield (near West Memphis) to Madison and then various trails.

By 1861, the Butterfield Overland Express employed several thousand people, according to The Encyclopedia of Arkansas History & Culture. But the Pony Express, which started in 1860, could carry mail faster and more economically. The Pony Express didn't carry passengers, but stagecoach passenger service proved unprofitable.

John Butterfield was forced out of the company in 1860 because of debt, but the stage line joined with Wells Fargo and continued to carry mail until 1869, when the transcontinental railroad was completed, signaling the end of the stagecoach era. 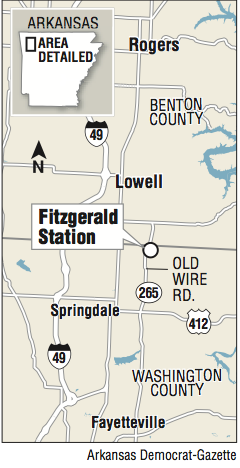 A map showing the location of Fitzgerald Station. 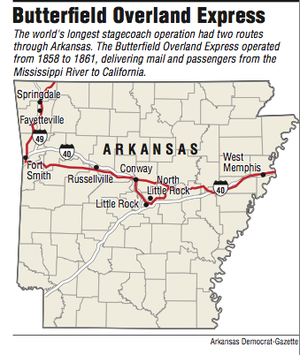